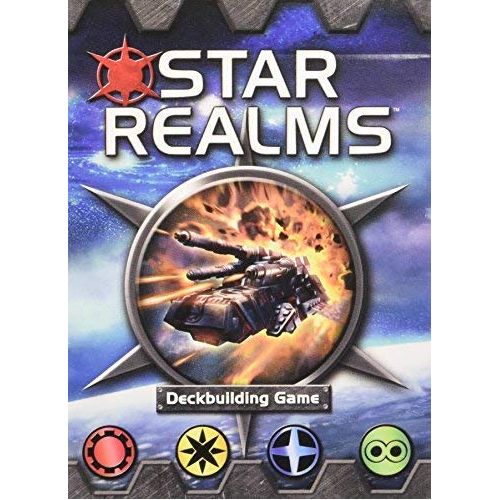 This has to be one of the easiest and best two-player games ever! Star Realms from White Wizard Games takes a couple of minutes to set-up and learn and then provides so much fun that you will want to play again and again, straight after finishing the first bout. It includes the classic deck builder mechanism where you both start off with the same cards and shuffle, deal and build yo…
Read More
Category Board Games Tags Best Sellers, BGG Golden Geek, BGG Top 100, Darwin Kastle, Gold, Golden Pear, Great For Two, Robert Dougherty, Star Realms, White Wizard Games SKU ZBG-WWG001 Availability Restock Expected
Share this
82%

This has to be one of the easiest and best two-player games ever! Star Realms from White Wizard Games takes a couple of minutes to set-up and learn and then provides so much fun that you will want to play again and again, straight after finishing the first bout.

It includes the classic deck builder mechanism where you both start off with the same cards and shuffle, deal and build your space arsenal from there. There are four different factions that you can buy up as and when they become available in the a market. Each of them giving you different advantages and abilities. You’re free to buy any of the cards from any factions but the more of one faction you have helps you in chaining card abilities together for a longer and stronger attack.

Your health starts out at 50 and is knocked down or healed up using the clever double-sided Health Point cards. Space Bases and defences will help you a long the way, that is until your opponent delivers the motherland of an attack and destroys them and injures as well in the process.

What to play this game with four of you? No problem, buy and extra pack and add them both together as this game scales for complete galactic carnage! A good recommendation on this would be to get Star Realms and Colony Wars (its sequel) and smash them together!

The art and design is on point,  keeping the players immersed in the sci-fi theme, and with so many smaller expansions for this game that bring in new twists and space blob turns, this is a game with tons of cosmic replay-ability within it. So much game for so small a price tag! Do it!

Ever fancied destroying an interstellar empire but always found yourself a little short on time? Star Realms provides the solution – pocket-sized galactic annihilation in as little as 15 minutes.


Star Realms is a light, deck-building card game of battling space armadas that plays in 15-30 minutes. Designed by Robert Dougherty, the base deck supports two players but this can be expanded  with multiple decks.

Each player starts with 50 authority (think hit points) and a starting deck of 10 ships. The starting ships provide one of two resources: attack lowers the opposing player’s authority, while trade allows the purchase of one of five randomly drawn cards in a central trade row. Each player draws five cards from their deck and either attacks their opponent, or buys more powerful ships and bases to add to their space fleet. The first to force the other player to drop to 0 authority wins.

There are two types of card. Ships are your standard fire and forget cards, providing bonuses for one turn only. Bases on the other hand, stay in play and provide a bonus each turn until the opposing player destroys them. Some, dubbed outposts, act as a kind of ablative armour and must be attacked before the opposing player can again lower your authority.

Starting cards are very weak, dealing either a single trade or damage. However players can quickly build their fleet into a formidable armada, capable of purchasing the most expensive ships and destroying multiple bases in a single turn.

Aside from the unaligned starting cards and the neutral “Explorer” ships, each of the cards in the game are aligned to one of four races. Most of the cards have a special racial ability that triggers if another card of the same race is played in the same turn.

This influences players to specialise in only one or two races, posing some interesting questions in which new ships to buy. Each race plays very differently and has a unique visual and mechanical identity in the game.

An alien race of organic ships, the Blob specialise in sheer damage output combined with several “draw card” abilities, allowing them to swarm opponents. They also have one of the best early game trade-generating cards, and the Blob Destroyer can destroy bases at will. However the Blob completely lack outpost bases.

OK, OK, calm down this isn’t the Trade Federation from Star Wars - you’re not going to see Nute Gunray invading Naboo with his “Droidekas.” This Trade Federation is the standard human interstellar empire – its ships and bases specialise in generating huge amounts of trade (surprise, surprise).

They can also “heal” the player by increasing authority. The Federation has a good range of bases, outposts and ships, but has limited damage potential.

Special abilities force opponents to discard cards, and allow the player to discard unwanted cards from their own deck. However the Empire has the lowest trade generation capability in the base game.

The Cult has a range of tough outpost bases and access to specialist stealth mimicking technology. Most cards allow the player to trash cards in their hand or discard pile, allowing them to  increase the efficiency of their deck. But the Cult has relatively limited damage potential, driven in part by the lowest number of “draw card” abilities of any race.

Inside the small and incredibly portable Star Realms box are 128 cards and a concise leaflet rule book. That’s it, but what did you expect for a game that costs a so little?!

The art on the cards is good. I can’t say great as some of the artwork is perhaps intentionally retro. The rule book suggests numerous modes of play for three or more players, adding to the game’s already good longevity.

The Colony Wars box set is a standalone expansion for Star Realms. It has the Scout, Viper and Explorer basic cards and a completely new trade deck with some neat new mechanics. Some cards allow the player to purchase the card and play it immediately into their hand, providing some extra firepower. Others allow the player to purchase a card of a set value or less for free.

The balance of the deck is different to the base game – it feels clunkier with fewer draw card abilities. There are also more cards allowing you to eliminate cards from the trade row, denying your opponent certain cards.

I would personally recommend the base game over Colony Wars as an entry to Star Realms’ core mechanics. Each of the races are more unique and characterful in the base game, it plays faster with more draw and discard abilities, and the Colony Wars expansion is a little trickier to play. If you like the base game, you’re going to enjoy Colony Wars too.

Star Realms is excellent, light card game fun. I’ve found it superb for kids (10+) and those unwilling to jump into a rules-heavy game. The short set-up and play times lend Star Realms well to filling in between more challenging or longer games. It isn’t for everyone, the short play times and the lack of long-term and lasting strategy could put hardcore gamers off. The strong element of luck that permeates throughout the game will also not be to everyone’s taste.

But I’m hooked on Star Realms. I keep coming back to it, thinking about different ways of tinkering with my deck, wondering which cards I’ll draw this time. Yes, there is a lot of luck in this game, depending on which cards constitute your hand and what’s available in the trade deck.

There are times when you know your opponent is going to beat you because they have purchased better cards. This is partially driven by a slight imbalance in the game; at identical price points some cards are better than others. But when you turn a dire situation around, when you get a stunning combination of 40+ damage from a single hand, keep Star Realms interesting.

If you enjoy deck builders, card games or light strategy games, give this a go. Alternatively if you are looking for a game to play one-on-one with a friend or family member who isn’t typically a gamer, give this a go. If you want to herald the collapse of your friend’s galactic empire by throwing a handful of cards into their face and shouting “BOOM!”, give this a go.

If you then want the satisfaction of doing that again only 20 minutes later, give this a go. Hell, if you’re interested in space-themed collage, sci-fi card towers, or interstellar DIY place mats, give this a go. After all, what have you got to lose for a shade over a tenner?