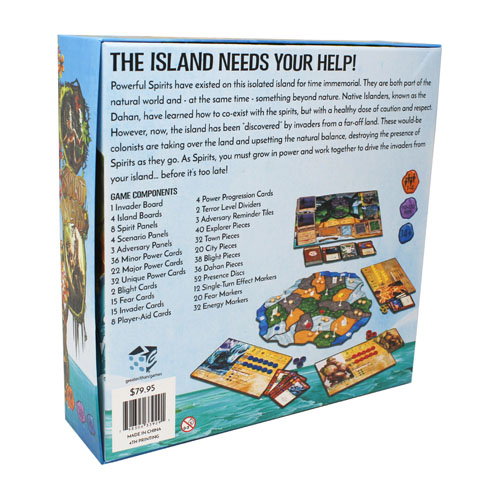 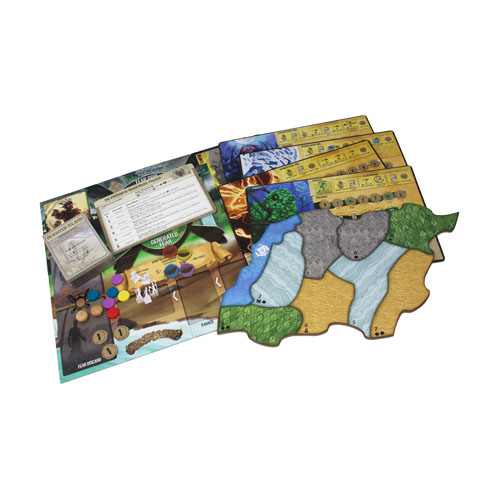 you could earn 5179 victory points

you could earn 5179 victory points

Spirit Island is a 2017 co-operative game from Greater Than Games. Deep, strategic gameplay unfolds against a startlingly compelling backdrop of island spirits fighting to defend their home from colonial invaders. Can you and your friends use your spirits’ powers effectively enough to repel Europe’s colonising hordes? Though you will always have to try to drive the invaders away…
Read More
Category Board Games Tags BGG Top 100, Dice Tower, Great Gifts, Greater Than Games, Podcast Approved, Stunning Artwork, Zatu Platinum Award SKU ZBG-GTGSISL-CORE Availability 3+ in stock
Share
Share this
90%

Spirit Island is a 2017 co-operative game from Greater Than Games. Deep, strategic gameplay unfolds against a startlingly compelling backdrop of island spirits fighting to defend their home from colonial invaders. Can you and your friends use your spirits’ powers effectively enough to repel Europe’s colonising hordes?

Though you will always have to try to drive the invaders away, no two games of Spirit Island will feel the same. One to four players choose from a set of eight spirits, each of which has four unique power cards. Each spirit is very different to the others, interacting with friends and foes in diverse and interesting ways.

On top of the eight spirits, players can also choose to face one of three different invader cards, each offering a new and distinct challenge. The board itself adds further variability, with four modular islands boards that each give the game a different flavour. Finally, four optional scenarios give you more variety if you want to change things up even more.

Action selection and area control are key mechanics in Spirit Island. Players choose which of their power cards to play, paying the associated energy cost to do so. The cards give players a mix of short- and long-term effects, with stronger powers available as the spirits’ influence spreads across the island.

The spirits are not free to do whatever they like, however. Your colonial adversary is an ever-present, growing threat. Over the turns of the game they will explore the island, settle and eventually ravage the surrounding territory, including the native islanders that you are trying to protect. If any spirit is destroyed, the island is overcome by blight or the invader deck runs out, your team will lose. If you can destroy or scare off all the colonialists, then you’ll win the game.

Do you think you have what it takes to keep your island safe? Buy Spirit Island today to find out.

Dawn breaks, and the island awakens with the sounds of strife. The invaders harry the native Dahan, all the while depleting the rich resources of the land, blighting it for generations to come. Do you, the Spirits, heed the prayers of your devoted followers, and use your powers over the elements to beat back the intrusive marauders?

Spirit Island is a 1-4 player co-operative island defence game designed by R. Eric Reuss. You control a spirit, each with its own unique powers, with the sole duty of beating back the invaders' attempts to settle colonies, blight the island's natural beauty and eradicate the indigenous Dahan. Players take turns simultaneously, spreading their influence and stockpiling energy to unleash swift and devastating attacks before the invaders can establish their cities and ravage the land.

Players win either through completely eradicating the invaders, or through acquiring enough Fear tokens to push the invaders to abandon their plans. The players lose should the invaders deplete the pool of Blight tokens, or if one spirit's presence is completely removed from the island.

Players begin by selecting one of the four island boards and one of eight Spirit dashboards to represent them, along with their corresponding power cards. Each Spirit has its own unique play style, innate powers and set-up position, in addition to a complexity rating and play style summary to allow players to quickly establish what their Spirit does, from Vital Strength of the Earth's focus on creating fortified areas, to Lightning's Swift Strike's emphasis on speed.

Once chosen, players interlock the island boards, and place their starting presence as well as any Dahan, invaders or blight according to the iconography on each numbered area on the island. Any remaining presence the players have is placed on their dashboard covering any dashed circle on the Presence tracks.

Players begin their turn by selecting one of three growth actions from their Spirit's dashboard. 'Add Presence' allows a spirit to place one or more tokens from their Presence track onto the island to spread their area of influence.

The 'Gain Power Card' action adds new abilities to your repertoire, either in Minor form for smaller-scale powers, or Major form for more powerful, energy-hungry actions that require the permanent loss of another Power to acquire. 'Gain Energy' gives the spirit a one-off boost to their Energy supply, and 'Reclaim Cards' allows a spirit to return previously used powers to their hand.

Powers have Speed, Range and Target values that indicate how fast a power is, how far away the power can target from your presence, and whether you need a specific entity in the land to use the power there. Powers also have a column of elements they provide either for fuelling the innate powers on your dashboard or unlocking more powerful effects on powers you acquire later in the game.

First, a card will enter the 'Explore' space, spawning explorers on each location of that type. The next turn, this card moves to the 'Build' space where the explorers establish new towns and cities. Finally, a card is pushed to the 'Ravage' space, where invaders attack the land and its inhabitants, blighting the land and routing the Dahan from their homes. The Spirits then resolve any slow powers they have remaining, after which the game returns to the Growth phase and repeats until either a win or loss condition is met.

Spirit Island is a complex entity, full of potential for dozens of game sessions straight out of the box. There is a lot of ground to cover, not just in Spirits, but also Adversary cards which add a face to the invaders and increase the game difficulty, as well as scenarios that increase the amount of game-ending conditions.

Spirit Island offers an experience unlike many co-operative games I've played. It is positively dripping in theme, from the way its spirits are represented, to its unique art style, all the way down to component quality. The difference in having invaders represented by plastic minis while using wood to signify your presence and the Dahan tokens is a subtle one, but it shows mindfulness on the part of the designer and publisher to make a distinct difference in presentation on the board to differentiate the natives and invaders. For even more versatility, the Branch and Claw expansion offers more spirits, adversaries and scenarios, as well as the recently-Kickstarted Jagged Earth set to release in 2020.

Despite the complexity, Spirit Island offers enough to get a less-seasoned gamer involved without them feeling overwhelmed, given the correct amount of support. Quarterbacking is essentially non-existent: there are so many power combinations that it is impossible for one person to control everyone else's turn. The Invader board makes it easy to identify the biggest threats and allow players to make the best use of their powers to ensure the survival of the island.