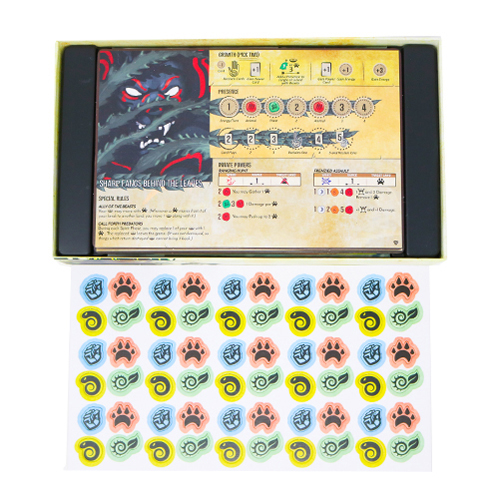 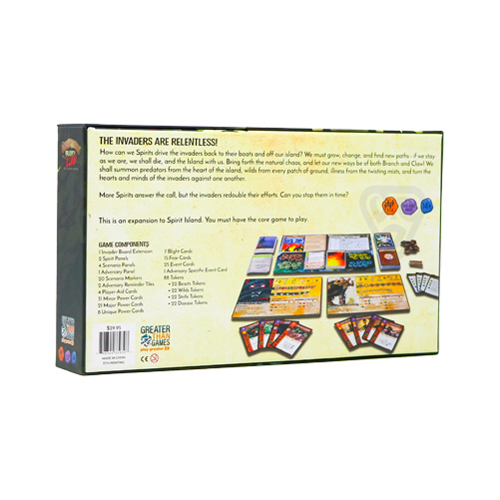 you could earn 2180 victory points

you could earn 2180 victory points

The Branch & Claw Expansion for Spirit Island, featuring two new Spirits (Sharp Fangs Behind the Leaves and Keeper of the Forbidden Wilds) and a new Adversary (France) as well as adding Events to the Invader Phase of the game! The Event Deck has events that happen each turn, adding further variation to the game play. In addition, the expansion has Tokens that prevent the invader…
Read More
Category Board Games Tags Best Sellers, Greater Than Games SKU ZBG-GTGSISL-BRCL Availability 3+ in stock
Share
Share this
82%

Branch and Claw introduces several new elements to the base game of Spirit Island.

Branch and Claw adds events into the Invader phase of the game. These events are contained in a deck of cards and can change game play. The events can impact in ways which are either positive or negative for the players but, unlike fear cards in the base game, they do not have to be earned.

The expansion includes tokens which prevent the invaders from exploring, building or ravaging. There are also wild beasts which can be added to the land. There are new major and minor power cards which link in with the tokens, as well as new blight and fear cards. The addition of the new cards keeps the game feeling fresh. The expansion also adds a new adversary in France.

There are also two new spirits included in the expansion - Sharp Fangs Behind the Leaves and Keeper of the Forbidden Wilds which use some of the tokens. Keeper focuses on spreading wilds tokens which prevent the invaders from being able to explore certain areas. Sharp Fangs commands the wild beasts of the land savaging their invaders and damaging their settlements. Unlike in the base game you can pick two growth options for these new spirits which add more versatility in the use of their powers.

All of these new items add a level of variability to the game. The tokens mean that spirits can deal with the invaders in different ways and can change the effectiveness of certain spirit combinations. The events add randomness which was absent from the base game. The new spirits add more abilities and lead to more interesting interactions.

You will need the base game of Spirit Island to be able to play with this expansion.

Branch and Claw is the first expansion for Spirit Island, a cooperative island defence game designed by R. Eric Reuss. For information on the base game, click here to see my full review.

The Branch and Claw Expansion introduces multiple new modules to spice up your games with added complexity. The introduction of four new token types to the game grants players another way to fight the invaders off. Each of the Wilds, Disease and Strife tokens disrupts the Invaders' actions, from redirecting damage away from the island to nullifying their ability to explore further or build new settlements.

These are also tied into the second new module: Events. These introduce unexpected shifts in gameplay and remove (somewhat) the predictability of the base game. Events can trigger differently based on your current Fear level, whether your land is healthy or blighted, the stage at which the Invader deck is presently at, or even the indigenous Beasts tokens and Dahan, causing a multitude of effects that can both help and hinder your progress. The included event board helps to keep all of the events and tokens organised on the board, with enough space for scenario and adversary cards should you be using them.

Speaking of which, the expansion also includes one new Adversary, the French, whose focus on building plantation colonies will force the players into submission if they can build enough towns on the island. To accompany this. four new scenario panels grant an additional variety in play, increasing the difficulty for veterans or just offering a different kind of challenge to the base game.

Two new spirits are available for selection, each focusing on the new token module added to the game. Keeper of the Forbidden Wilds focuses on spreading Wilds tokens which inhibit the invaders' ability to Explore in specific regions. Most of his powers focus on these tokens or the creation of Sacred Sites from which his potency grows exponentially. Conversely, Sharp Fangs Behind the Leaves commands the normally placid Beast tokens into action, savaging the invaders and damaging their settlements.

Each spirit represents a new way to leverage the advantage of the new token module, but it will still take precise skill and focus to ensure victory for the island. In a change from the base game, both spirits have a 'pick two' option for their Growth powers, offering additional versatility in the scope of their powers. They also offer a final Growth ability which is of a higher power level but also costs you an amount of energy, giving you the opportunity to unleash your spirit's full potential by the mid-game.

Finally, Branch and Claw adds additional elements to previous modules: 52 New power cards are present which work with the new modules introduced in the expansion, along with additional Blight and Fear cards to improve the variability of the base game.

Final Thoughts on the Branch and Claw Expansion

Branch and Claw extends the wealth of play options from Spirit Island in a perfectly sized package, with enough content to keep you going through dozens of plays, each time augmenting the experience either to taste or to difficulty level. The new spirits offer interesting decision-making opportunities and strategic advances without becoming overbearing. Each is a medium-difficulty spirit, making them ideal for players who have a few games under their belt already, or for veterans to leverage their unique traits and advantages.

The Event deck is the standout module for me. Given repeated play, the controlled randomness of the Events rips out a lot of the stale predictability of the base game, especially as you fumble (or waltz) to a victory. Take that mechanics are kept to a minimum, and mitigating the negative effects is absolutely achievable given the amount of options to combat or even completely nullify some effects. The danger is that without knowing what the danger is, you can also find yourself wholly unprepared for what comes up... and I love that.

The additional tokens are wonderfully illustrated, but if you weren't a fan of the fiddly nature of Spirit Island before then this will do little to change your opinion. Adding extra tokens to a board already flush with invaders, presence, Dahan and blight makes the board look incredibly bloated, especially as some effects can drown multiple zones in them. Unfortunately, a lot of the additional modules require use of these, so the trade-off is quite distinctive, though not game-breaking if you accept the downsides of the base game already.

Branch and Claw doesn't break convention with its offering. It expands in the places people might expect (New spirits, power cards, etc) while attempting to break the mould with some new offerings such as the event cards. While I wouldn't play with every module at once right out of the box, it is worth having for the additional options the expansion opens up, and gives you the same method of delivery as the base game, allowing you to build up your experience by adding one module at a time.

I don't necessarily consider this a must-have expansion, and those of you looking to expand your Spirit Island offering might wish to wait for 2020's Jagged Earth Expansion, but if you've played the base game a few times already and feel your games becoming boring then it's always worth having a few more feathers in your cap to keep the strong gameplay offering continuing on.