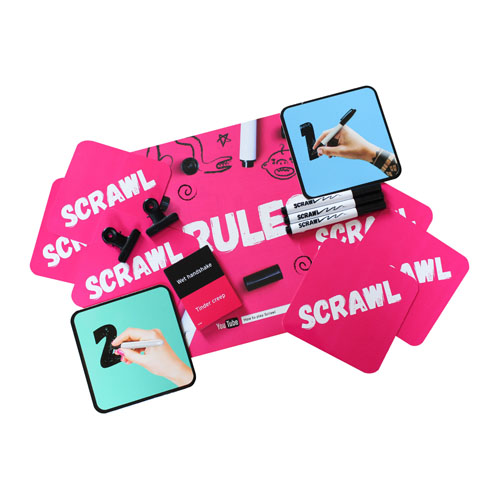 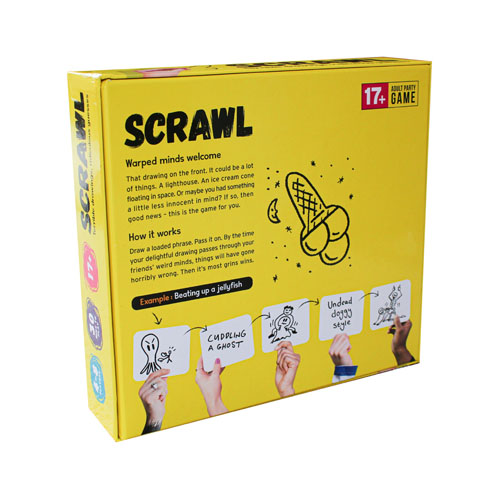 The disastrous doodling and guessing game for adults. Sketch a phrase, pass it on and watch how things go horribly wrong. Each player reveals their cards, then it’s most grins wins.
Read More
Category Board Games Tags Best Sellers, Big Potato, Fun For All the Family, Girls Night In, Top 20 Party Games SKU ZBG-SC01 Availability 3+ in stock
Share
Share this
82%

If you have ever fancied yourself as the next Monet or Van Gough, then Scrawl is a game that should suit you perfectly well. This adult party game comes from the creative minds of Big Potato Games, famous for games such as Obama Llama. Scrawl, as described by the creators as “chinese-whispers meets Pictionary” is a game of frantic doodling and some “innocent” misunderstanding that sees players trying to guess what the awful doodle in front of them is trying to depict, while also letting their inner Picasso out and attempting to draw the phrase they have been given.

The game starts by all players taking a card with scenario card, with a phrase that the player must illustrate. Once drawn, the doodle is then passed to the player on their left who then proceeds to try and guess what has been drawn and writing it on a new board, that being placed over the drawing, which is then passed on to the player to your left. This continues (drawing and writing) until you end up with your original board that should, hopefully, have more doodles and phrases placed above it! Each player will then see what journey their picture has taken and everyone votes on their favourite doodle for each player! That proud artist will then receive a point!

“But what if the final scrawl matches the original phrase on the card” I hear you cry! Well, if that happens, then the player responsible can rejoice and gain a bonus three  points! Scrawl can quickly spiral out of control, with drawings getting more and more questionable as the game plays on! The winner is the first person to get the same amount of points as there are players or, as Big Potato affectionately put it; the first person to die laughing!

Scrawl is sure to put the spirit back into anyone’s party but remember to enjoy responsibly and sorry kids, this is strictly adults only!

You may be forgiven for taking a passing glance at Scrawl, and being immediately overcome with terror as you recollect the many incidents and feuds that came out of playing Pictionary with the family – Nobody wants to repeat the great family squabble of December 1993… Big Potato Games, a UK based company specialising in party games, decided enough is enough – something had to be done – People need to draw and have fun!

Scrawl is a follow-up to a number of other successful releases, namely Linkee and Bucket of Doom. The original version was released back in 2016, with the Second Edition, larger box printing, coming out a year later.

What’s in the Box?

The game comes complete with enough bits and pieces for 4- 8 players to play at any one time.  These include eight player boards and bulldog clips, enough Scrawl dry-wipe cards for people to write/draw on as the game progresses, 240 multi-choice phrase/scenario cards, and eight dry-erase pens and cloths.

Owners of the original edition will not find anything too dissimilar in the updated version. The only discernible difference is that the clue cards are larger in comparison, a change which makes them easier to read and visible from across the table, and a few minor artwork tweaks. The larger box does seems to allow for the game and its components to be stored a lot easier, as you could often find the first edition would fall out of the insert if stored vertically.

How does it Play?

The rules in Scrawl are simple. Each player will nominate a colour, and then take a Phrase/Scenario Card, and begin attempting to draw their best interpretation of it onto their player board (the colour nominated determines which phrase/scenario the player has to draw). Once they are done, they pass their board face down to the player on their left. Other players around the table will be doing the same thing simultaneously.

As the boards are passed, players will then look at the drawing they have been given, take a blank Scrawl Dry-Wipe card, and clip this onto the drawing. They will then write down what they think this is a drawing of.  This process is repeated around the table (Draw > Write > Draw > Write etc) until each Player Board returns to their owner. The most accurate description I could give Scrawl is that it is Pictionary meets Chinese Whispers.

At this point, each person in turn will start by revealing their Scenario/Phrase, and the ‘journey’ that has ensued. A point is awarded by that player as they pick the best/funniest/rudest drawing or phrase that has been added along the way. Should the final phrase that has been written on one of the Scrawl cards match your initial phrase/scenario, then you are awarded two points. Play continues until one player has two more points than there are players at the table.

(I should point out that the game itself isn’t “child friendly,” as some of the phrases/scenarios are a little rude to say the least…)

Scrawl seems to be one of those games that gets to the table more often when playing with people that aren’t heavily into modern board gaming. That’s not to say that this won’t be played by those that adore heavy-Euros, but in my experience it isn’t played all that much at game nights, rather social gatherings.

The game itself can be quite divisive due to the humour and apparent rudeness on the cards. I’ve found that people can be turned off the game if they aren’t the best at drawing/sketching, which is a shame. I do try to include people of all drawing skill levels, as it can make for some interesting and hilarious moments, as the journeys are revealed at the end of the round.

I’ve played Scrawl a few times now, and tend to house-rule it somewhat. Firstly, I let players pick a card and decide which of the four phrases/scenarios they want to draw – again, this is trying to allow for those that aren’t the best at drawing to play. I also sometimes ask for a group decision on which Scrawl card to award a point to, or simply go by the general reactions of those playing. It could be ‘gamed’ a little if people are inclined to win at all costs.

Overall, I’d happily add this edition to my collection, and would go out of my way to recommend this over party games in the vein of Cards Against Humanity. As mentioned previously, this isn’t family friendly, so please don’t mistakenly buy this for a young family member!