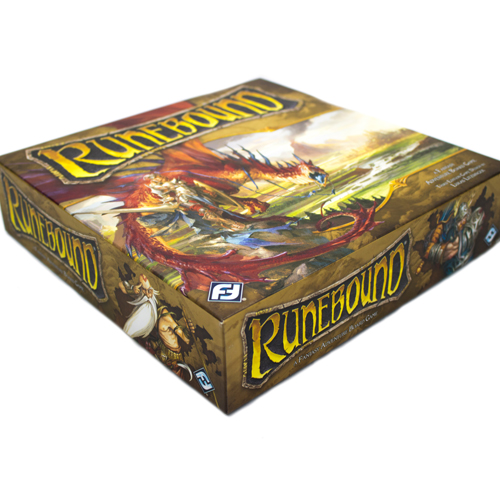 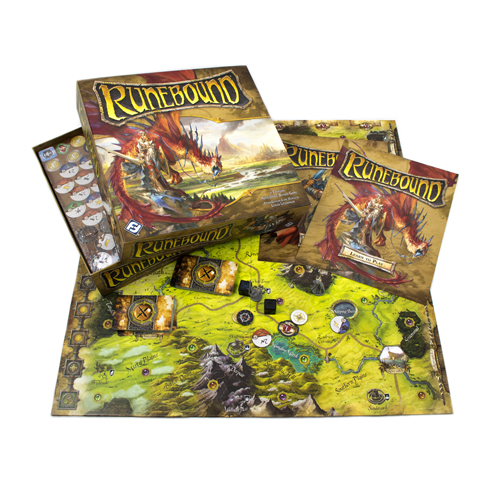 Welcome to Terrinoth, adventurer! Runebound is a fantasy adventure board game for two to four players, inviting you to play as one of six heroes wandering the realm and taking whatever quests you may encounter.But all is not well in the realm: evil is awakening once more in the form of Margath the Dragonlord or the Corpse King, Vorakesh.Only you and your rival heroes stand a chance …
Read More
Categories Board Games, Miniatures Tags Fantasy Flight Games, RuneBound SKU ZBG-FFGRB01 Availability Out of stock
Share this

Welcome to Terrinoth, adventurer! Runebound is a fantasy adventure board game for two to four players, inviting you to play as one of six heroes wandering the realm and taking whatever quests you may encounter.
But all is not well in the realm: evil is awakening once more in the form of Margath the Dragonlord or the Corpse King, Vorakesh.
Only you and your rival heroes stand a chance of stopping this threat before all Terrinoth is consumed in darkness.
Two distinct scenarios give shape to your adventures in Terrinoth, challenging you to battle undead or outwit a dragon, even as you explore lost ruins and forgotten forests and take on quests across the realm.
New adventure cards and story cards for each scenario make every game unique, alongside the ability to customize your hero with over one-hundred different skills and assets.
Whether you play as a mage bristling with spells or a powerful warrior, every game of Runebound invites you to experience an incomparable adventure.
Take your first steps into the world of Terrinoth!

Clause 5.8 in the company contract requires all Zatu employees to take the Bouletic Oath. Clause 5.9 bans the use of eyeglasses, a devil’s tool for undoing God’s just punishment. Our noses close to the screen, we’ve flexed a bit of 5.8 by asking gamers from the web what they think of Runebound 3rd edition.

Responses were limited but all-encompassing, and are cleft down the centre between the good and the bad. Here’s what people think of Runebound 3rd edition.

I’m a big fan of it. The story is generic, in a good way. Trolls are trolls, giants are giant, so you don’t need to get bogged down in learning a wholly unique fantasy tableau for the sake of it. Where the story becomes unique is in how the player interacts with it and the path they take.

Token combat is awesome, and they’re already showing new things they can do with them in the expansions which is great.

I got it as a present during the summer and it’s still one of my favourite games. Played it recently with my gaming group and they all really enjoyed it. With 3 players it took us 3.5 hours and it didn’t feel like it at all. Time flew. The token combat is great and beefing up your character is satisfying. I’ve also played it solo with 2 characters (trying to choose the best options in combat) and it works quite well. I definitely plan on getting the expansions at some point when they are on sale. The game reminds me of Talisman with its fantasy style and going around trying to level up but IMO it’s far superior and better designed. Would recommend 10/10.

It’s okay. The action system and the sense of progression are nice.

Unfortunately, the expansions make set up very fiddly. I like Runebound because it’s a casual beer and pretzels adventure game, and expansion set up takes a bit away from that.

The world seems kind of generic. I was expecting to like the combat system more than I did – there’s nothing wrong with it, but most of the time, your choices are obvious.

I like the game, I would buy more, but I consider the 4 expansions FFG have released thus far to be a ripoff. Should have been 2 expansions at most, and perhaps only one.

So unfortunately not a new Runebound for me at this time.

Because they are ludicrously small for the price they are charging. Or overpriced for what they contain.

So there you have it: good generic, bad generic, awesome combat, aweless combat, okay, 10/10. If you’re spellbound by Runebound 3rd edition, buy it from Zatu today!

Runebound is a fantasy adventure for 2-4 players set in the verdant but imperfect (given all the evil) world of Terrinoth. Players begin by choosing their enemy, either the Dragonlord Margarth (not a lord of dragons, but an actual dragon that some genius put on the honours list) or the Corpse King Vorakesh, so named after pouring alphabet soup into a silk bag of scrabble tiles.

Depending on which they choose, distinct cards and events come into play during the adventure, skewing the experience towards either lizards or cadavers.

There are six playable heroes, each with unique stats and abilities: Master Thorn, who has a beard and teleportation; Elder Mok, a goblin spirit shaman; Laurel of Bloodwood, a lady with a bow and arrow and coat; Corbin, a dwarf, a short dwarf; Lyssa, a lady; and Lord Hawthorne, who has quite a large sword.

Players must travel the land, dealing with a series of ‘encounters’, of which there are three types: combat, social and exploration. By completing said encounters, players can build up their characters by fighting, chatting, and exploring respectively, all with the ultimate goal of, y’know, killing a corpse. Or dragon.

For fans of Mage Knight, this game is often billed as a slightly lighter equivalent.

Fantasy Flight were originally comic book publishers, but branched out into board games with the release of Twilight Imperium in 1997. They are now the 5th largest board game publisher in the world.

Other well-known titles include the Game of Thrones card game and The Adventurers series.

Lukas Litzsinger is a designer with Fantasy Flight Games best known for his work on the successful Android: Netrunner series.

If you’ve always hated free range runes, bind them by buying this game from Zatu!