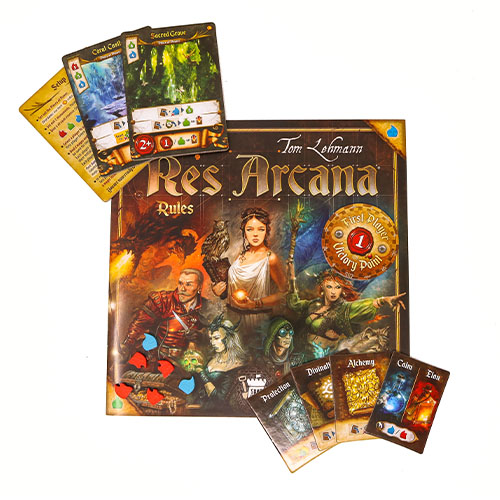 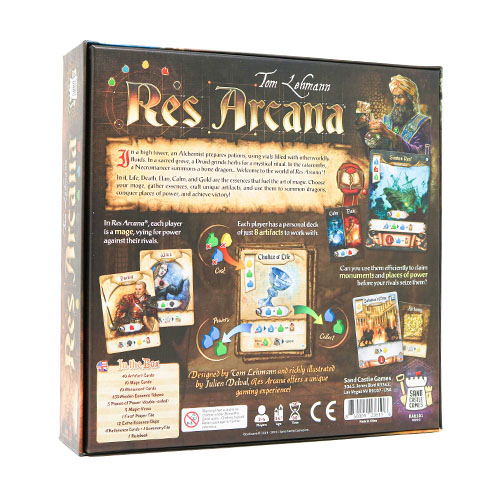 In a high tower, an Alchemist prepares potions, using vials filled with otherworldly fluids. In a sacred grove, a Druid grinds herbs for a mystical ritual. In the catacombs, a Necromancer summons a bone dragon… Welcome to the world of Res Arcana! In it, Life, Death, Elan, Calm, and Gold are the essences that fuel the art of magic. Choose your mage, gather essences, craft uniqu…
Read More
Category Board Games Tags Best Sellers, Dice Tower, Thomas Lehmann SKU ZBG-RA0101 Availability 3+ in stock
Share
Share this
85%

Thomas Lehmann is the designer behind the ‘For The Galaxy’ games. That’s Race for the Galaxy, Roll for the Galaxy, Jump Drive and New Frontiers for the uninitiated. Which ever you prefer out of these games they all provide a satisfying engine building game of combos galore. When it was announced that Res Arcana would also be an engine building game from Lehmann many assumed this would be a fantasy reskin. Many were wrong.

While Res Arcana does offer you the same satisfying engine building game play the why’s and how are very different. For a start you will have all 8 cards that you can use in your hand from the beginning of the game. While there are some other cards and powers you can gain, these are all from the central tableau and will never enter your hand. In the simpler variants these cards can be preselected or randomly dealt but for the proper gameplay you will need to draft them

It is in this drafting phase that you start to play out your whole game even though a card hasn’t been played yet. Spot cards that synergise with each other, prioritise and take risks. It’s a drafting phase that is more exciting than it should be. The powers on these cards, the engine that you will be building, are someone vanilla when you stop and think about it, allowing you to gain and change resources and alike. But they come together in a sum greater than their parts and chaining together a combo that your opponent never saw coming is a wondrous moment,

The limited amount of cards also makes Res Arcana easier to teach than you would think. Each player only has to grok 8 cards in their first game. Use the advised set up and this is straightforward stuff. Res Arcana is a brilliant card game, that has great components and plays quickly with a huge focus on satisfaction. Forget the galaxy. Arcana is where it is at.

Res Arcana is an engine-builder from designer Tom Lehmann. Tom Lehmann is probably most well known as the designer of Race for the Galaxy, which is definitely one of the classic engine building games in our hobby. We are among many fans of the game, despite the standard complaint about overwhelming symbology.

Res Arcana switches to a fantasy setting, in-which 2-4 players plays as different mages. They use the resources - life, death, elan, calm, and gold - to fuel the art of magic. The game is a race to gain points by conquering places of power and summoning dragons and mystical creatures.

In Res Arcana, victory can be obtained by summoning powerful dragons that can weaken your foe's resolve. Alternatively, you can win by using your magical essences to claim places of power which can then be further charged with magical arts. Also, you can amass gold to build monuments to your glory or combine all three into your winning strategy. Whatever your game plan is, it's a race to be the first to 10 victory points at the end of a round.

The game begins with each player being handed a deck of eight cards. However, there is a drafting variant if you want more control. You then look at this deck, shuffle it and draw a hand of three before selecting one of your two mage cards as your character. Hopefully, all of this lets you build up something of a strategy. If you want a bit less variability there are four default starting hands to ensure all players get a balanced and viable start. After this each player will take turns choosing one of the available items, these cards are only kept for a round but give increased income or extra powers.

Each player takes turns to make a single action. There is no limit to the number of actions one player can take in a single round, so long as they have the resources to do them. Actions are typically playing an artefact card by paying its cost in essences, discarding a card to gain essences or activating a card to perform its ability. Artefacts are hugely varied with some giving you turn by turn incomes, some letting you store resources on them (only available next turn) and others to attack your opponents. Hopefully you'll manage to build up your artefacts into an engine that produces the gold or essences you need to buy some of the places of power or monuments available. These are where most of the game's points come from.

Once you run out of actions you pass, the first player to pass gains the first player marker (worth one point), then draws a card and trades in their item for another. Once all players have passed the round ends and unless someone has 10 points a new round will begin.

Res Arcana is a game filled to the brim with replay-ability. Not only is there a huge deck of artefacts, of which you only see eight each per game, but the places of power are all double-sided which changes the routes to victory dramatically. You'll have to use your knowledge of your deck as some of these places of power are reliant on you having certain card types, or at least high production of specific essences. Be prepared to evaluate and then play to your deck's strength if you want to win!

Res Arcana does a great job of presenting a competitive mage duel. It brings an excellent engine building system with tight resource management as you eke your way towards that 10 victory point goal. Like any good engine building game, you start off with very limited decisions and end the game with comparatively huge income and options. Res Arcana manages to create hugely different strategies by presenting each player with only a handful of cards for the whole game. While there certainly is a chance to get a better deck than others, we've always seemed to have extremely close game so clever use of what you have can make every card useful, even if it's just to discard to essences!

Overall, Res Arcana is simple to play, but deep in its variability and strategy. For me, this makes it a brilliant card game and I highly recommend picking up.

Like most engine builders, Res Arcana is all about combos, and combos are just inherently fun. I've really enjoyed that the game isn't just about your combos, but it's also about focusing on a strategy and there are plenty to explore in Res Arcana. Every game with two players has ended with a really tight score and I've used a Monument focused strategy, a Gold-focused Places of Power strategy and a Creature and Dragon Strategy. All of those decisions have been driven by the variable setup with lots of Artefact cards, double-sided Places of Power and a large deck of Monuments.

As you might expect, the game takes a while to get going because you are building up your engine. The essences are very tight in the early game and your choices are pretty critical on whether to spend all of your resources on playing Artefacts or to save and convert them into other things. Once you have several cards in your tableau, you really start to get your engine working. This can happen at different points for different players. I've found that it can be a little demoralising if your engine is the last to kick in, but somehow, by the end of the game, it's always felt like a very close game.

In our first three games of Res Arcana, we slowly increased the complexity. We began with the suggested starting mages and cards, before moving on to randomly dealt cards with a choice of mages and finally, drafting the cards. Personally, I was happiest at stage two of this process. Whilst I'm sure that the drafting variant is designed with experienced gamers in mind, it was too high pressure for me and felt like a Magic the Gathering style deck-building - which I never enjoy. I'm not a fan of having to identify all of my combos upfront, I'd rather play tactically with the cards I was given, even if perhaps that's not so fair and results in an engine that is less impressive. Nevertheless, it's nice to see all of the options in the rules.

I'm not sure that Res Arcana does anything revolutionary, but it's exactly the kind of clean engine builder that I enjoy. The barrier to entry is much lower than in Race for the Galaxy. The symbology is super clear and there is a player aid should you need it. We didn't find it necessary after two or three games. The two-player game only lasts 20-30 minutes, which does give you enough time to build and execute a really lean engine, unlike other engine builders that might last longer and still feeling like you never used the engine you created.

I've explored three different strategies already in the game and I'm not sure there is a whole lot more to explore. However, I'm honestly not too worried. For me, such a great 30-minute game doesn't need a ton of variety to keep me coming back. Games will play out differently simply due to card draw. The double-sided Places of Power have many similarities, but give be 10 potential routes to explore.

I love the game and I'd be more than happy to see more content to fill out the box. However, I don't think I'm as in need for the additional content as a few other reviewers I've heard from. For an engine building fan, I have Res Arcana at the short end of the spectrum and Terraforming Mars at the long end, and I don't really need a lot more.