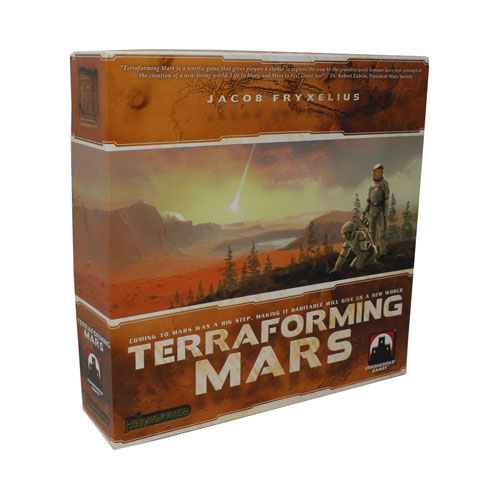 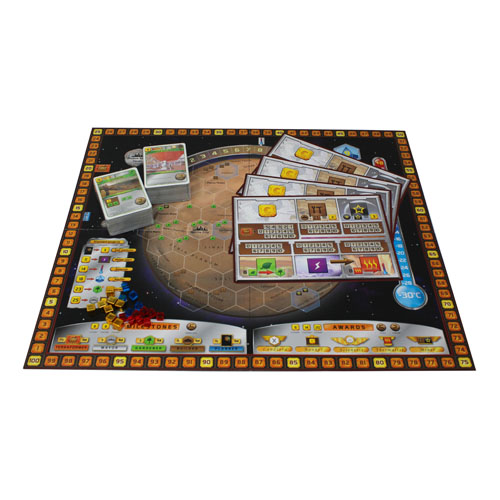 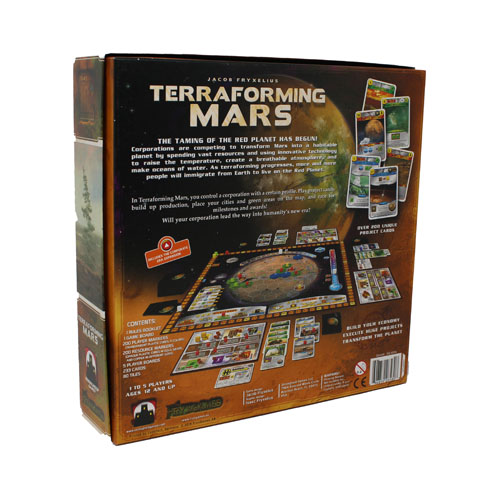 you could earn 4699 victory points

you could earn 4699 victory points

According to Board Game Geek’s ratings, Terraforming Mars is the fourth-best board game of all time, right now! That’s high praise indeed for Jacob Fryxelius’ pride and joy. It balances a blend of hand management and card-drafting that’s all driven by economic resource-management, and it culminates in territory-building on the red planet.

Yes, Mars is the setting here (oh, you’d already guessed?), and, much like Elon Musk’s plans at the time of writing, you’re a corporation looking to make the fourth planet habitable for the human race in the futuristic 25th century.

Mars begins the game in its current state: it’s an inhospitable host, with the temperature being far too cold for life to thrive, there’s a severe lack of oxygen and there are not enough oceans. It’s your job to contribute towards fixing these three factors, transforming Mars into a planet that more resembles Earth. When these three characteristics have met their goals, the game will end, and whoever has amassed the most points will be the winner. Hopefully by this point you will have built various technologies, earned set collection rewards and you’ll have a healthy bank balance (terraforming ain’t cheap, you know).

Over 200 different Project Cards drive Terraforming Mars. A round begins by players being dealt cards, and then they decide if they want to pay 'megacredits' to keep some or all of them. It will also cost you 'megacredits' to play the card (think of it as ‘funding’ the project, itself), so money-management is always tight. At the start of each round, players will receive 'megacredits' equal to their current Terraform Rating (which count towards your points at the end), so you’ll want to increase this as soon as possible.

Some projects offer game-long benefits, while others can count towards achieving certain immediate goals. Others also produce resources such as steel, or plants. Players each have player boards to manage their own resources, to further improve their ever-growing tableau of projects.

The brilliant thing about all of these Project Cards is that some of them cannot be completed until certain factors have been triggered, such as Mars’ temperature reaching a certain degrees, or a particular oxygen percentage is met. Other cards have to occur before certain landmarks are hit, making it quite the efficient race. Should you pay the 'megacredits' now, even though you can’t use the card at the moment? Will you even get to complete the project in time?

Asymmetrical starting powers are available, too (recommended for those with a few plays under their belt). These also add further cards into the mix. Players might want to also consider acquiring separate expansions – Hellas & Elysium, and Venus Next.

One thing’s for sure: Terraforming Mars provides a truly absorbing theme. It’s so satisfying when a game’s theme is logical and married with its mechanics in such a superb manner. It’s easy to see why this is rated so highly.

When looking into whether Terraforming Mars was for me or not, the thing that swung the balance was the fact that it had a solo mode. I intended to play the game with others at my games group as I knew it would be a bit too heavyweight for my family, but the thought that I could also play it at home on my own persuaded me to make the purchase.

Terraforming Mars is an awesome game that I didn’t think would live up to the hype… But it does! As a multi-player experience it ranks up there amongst the very best, but how does it rate from a solo perspective?...

In space no one can hear you terraform

The solo game uses the Corporate Era expansion cards, which are included in the base game, and you start with zero production and a lowly Terraform Rating (TR) of 14 (rather than the usual 20). The board is pre-populated with two randomly placed neutral city tiles, each with an adjacent neutral greenery tile, and you can also steal resources from this benignneutral opponent. Milestones and Awards are not used in the solo game.

To win the game, you need to complete terraforming before the end of the generation 14 by raising the three global parameters to their required levels (oxygen to 14%, heat to +8˚c and adding nine oceans to the planet surface). After the final generation, you get one last chance to convert your remaining plants into greenery tiles as per the regular game, and then you score your victory points with the aim of getting as high a score as possible. There is no second place here – if you have not completed terraforming by the end of generation 14, you simply lose. 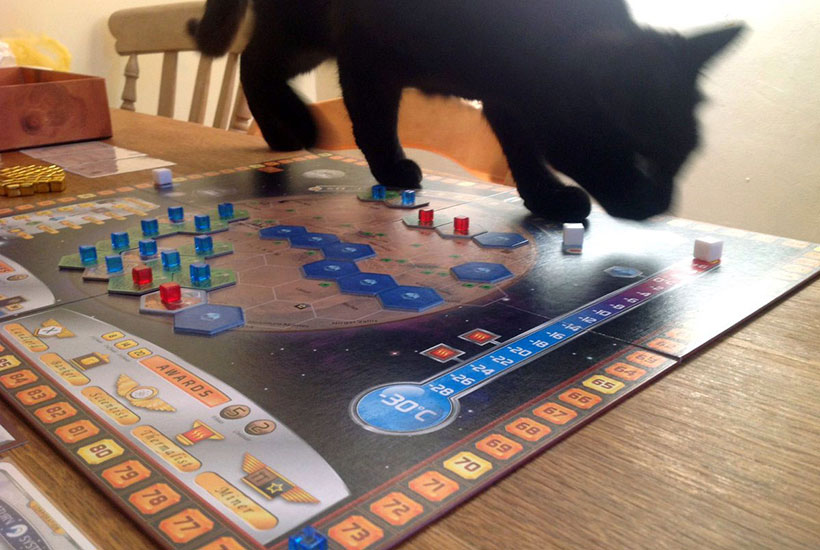 Perhaps the biggest thing from the multi-player game that is absent in the solo mode is the Milestones and Awards, which both provide inventive ways for players to earn bonus points for reaching certain achievements before their opponents. It is a standout aspect of the multiplayer game but wouldn’t work in a solo mode. The solo mode is rather simplified by not including these, but it doesn’t hurt it as much as I expected because you’ll be concentrating on the race against time to get the planet terraformed and that’s the slight change in focus from the multiplayer game.

In the multiplayer game you can sometimes win despite ignoring certain aspects of the terraforming process, letting others take care of it for you, but in the solo mode you need to raise all parameters yourself – this involves taking a more holistic approach and focusing mainly on cards that will contribute to that aim and sometimes ignoring others that would distract or take resources away from the end goal.

In later generations I have found that my engine is often big enough that I am fairly sure that I will be able to meet the global parameters and can focus some of my resources on improving my point score.

I also have the Hellas & Elysium map expansion and in terms of the solo experience I really like the variety and different spatial challenges they offer. I rotate between the different maps each time I play, but that’s not saying the base “Tharsis” map gets boring – I’m sure it could withstand over a hundred plays before I’d be bored of it. 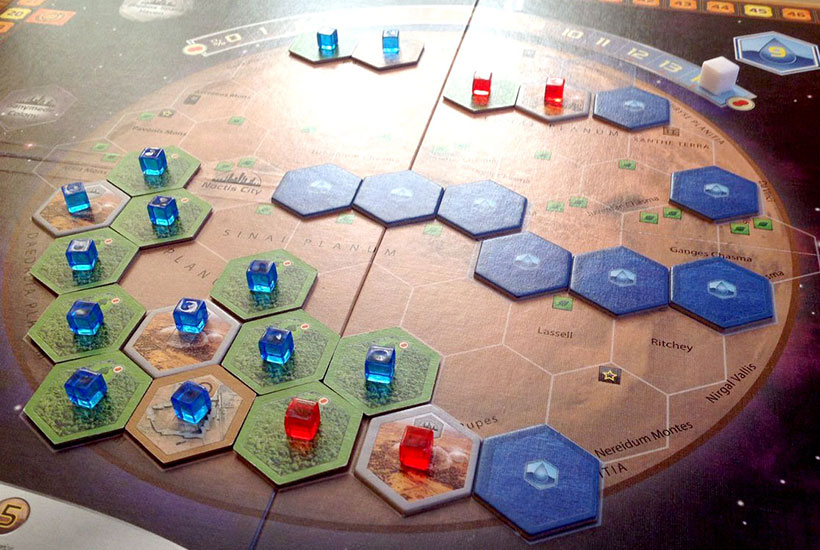 Terraforming Mars really stands tall in comparison with other solo games. Yes, the game time is a lot longer than smaller/lighter solo games such as Onirim or Friday, but it’s Terraforming Mars and you know what you’re getting into. Plus it’s so good that you’ll probably be sad when the experience ends. It is one of my favourite solo gaming experiences.

The big (hypothetical) question is would I buy it if I could only play it solo? The simple answer is yes. Granted, I’d be missing out on the interaction and the Milestones and Awards, but the solo mode is a solid epic experience in its own right and I think it justifies the cost.

You Might Like
A good challenge. Even if you win you’ll want to beat your previous score.
You can get your Terraforming Mars fix when no one else is around.

You Might Not Like
Milestones and Awards aren’t used.
Lack of interaction (but I guess that’s the nature of solo gaming).