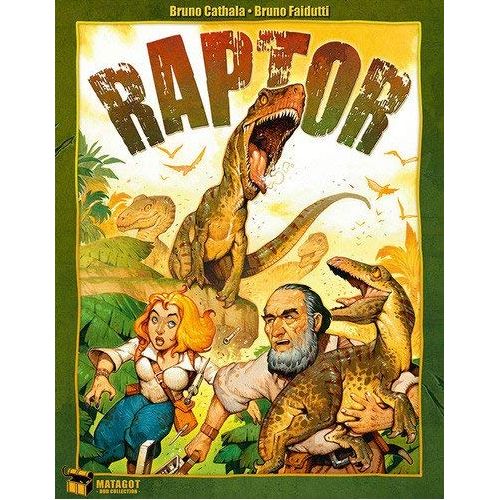 Add to Wishlist
Mamma Raptor has escaped from her run and laid her eggs in the park. A team of scientists must neutralize her and capture the baby raptors before they run wild into the forest. Raptor is a card driven boardgame with tactical play and some double guessing. Players use their cards to move their pawns (scientists on one side, Mother and baby raptors on the other) on the board. Every ro…
Read More
Category Board Games Tags Bruno Cathala, Bruno Faidutti, Dice Tower, Gold, Matagot, Raptor SKU ZBG-MTGRAP01 Availability 5+ in stock
Share this
85%

Raptor is an asymmetrical two-player game by Matagot. One person plays as a team of scientists, and the other as a family of Velociraptors. If you’re a fan of Jurassic Park or Jurassic World movies, you’re in for a treat. Ever thought the heroes of those films did a shoddy job? You know the scene, the “Clever girl!” one. The one where the ranger gets ambushed by the raptor. Admit it, who hasn’t thought to themselves, ‘I could do better than that…’ Here’s that chance, in board game form! This isn’t tied to the Jurassic Park films, though. This is a game with real pedigree on its own, from colossal design duo Bruno Cathala and Bruno Faidutti. Raptor has a modular set-up every time, with six double-sided tiles making a range of layouts. The game also comes with minis: a team for the dinosaurs and another for the scientists. In Raptor, each player gets a nine-card deck, and separate win conditions. The dinos win if three babies escape off the board, or if they eat all the nasty humans. The scientists win if they can capture the babies, or fully tranquilize the mother raptor. The game is all about hand management and outwitting your opponent. Each player’s deck is numbered 1-9 and they start with a hand of three cards. Turns tick over by players picking a card in simultaneous fashion. The lower number gets to do the special action on their card. The mother can call her babies to her tile, for example. The scientists can use fire to halt the babies’ path to freedom. The higher number gets to spend action points. This sum is the difference between the two cards’ numbers. Players use action points for grid movement, or to attack. Attacking could be biting, or shooting with a tranquilizer gun! Coming in at under 30 minutes a game, Raptor is a fascinating pendulum, a ding-dong of a two-player battle. Play Count: 2 players Time: 25 minutes Age: 9+

Raptor was my first introduction to Matagot Games. The French developer has gained a reputation for great games with amazing components. The stellar Kemet is one of my favourite games of all time and each players army is a unique sculpt as well as colour. That continues here with various scientist minis and a momma Raptor with her five babies.

Raptor was also my first introduction to asymmetrical play, where each player has different types of things they can do in their go. Raptor is on the minor side of asymmetry with the powers being the main difference, unlike a game like Vast where the game is completely different depending on your role.

Raptor is a two player game only. To set-up you will arrange the six central boards and four end ones before choosing a side. Both the scientists and raptor have their own player boards, miniatures and a set of nine action cards. The scientist player also takes fire and tranquilliser/sleep tokens. The starting minis are placed on the board as well as some blocking scenery.

The goal of the scientists is to capture three baby raptors or hit the mother with five active tranquillisers. Mama Raptor must eat all the scientists on the board or lead three of her babies to safety.

The nine action cards are the key mechanic here. Each is numbered 1-9 and when played remains on the table and unavailable until you play your number one card. Each card has both a number and a special ability. You draw three cards from your deck and simultaneously play one. The player who played the lowest numbered card gets to use the cards ability, while the higher card gets a number of actions equal to the high number minus the lower number. So worse case, if I play a one and you play a nine you'd get eight actions.

Scientists actions are: Moving one space, becoming 'unfrightened', putting a baby raptor to sleep, capturing a baby raptor (they must be asleep first) or shooting the mother. You can do each of these as many times as you have actions with some restrictions. The same scientists can't make multiple aggressive actions per turn for example.

Their special card actions allow more scientists to enter the jungle, setting fires that the raptors can't cross, moving further in a Jeep and sending babies to sleep with gas grenades. Each card tells you how many of each action you get. The raptor card abilities are sending scientists into a cowardly state, calling babies to the mother, recovery from sleep tokens, and disappearing off the board before reappearing elsewhere after the scientist turn. 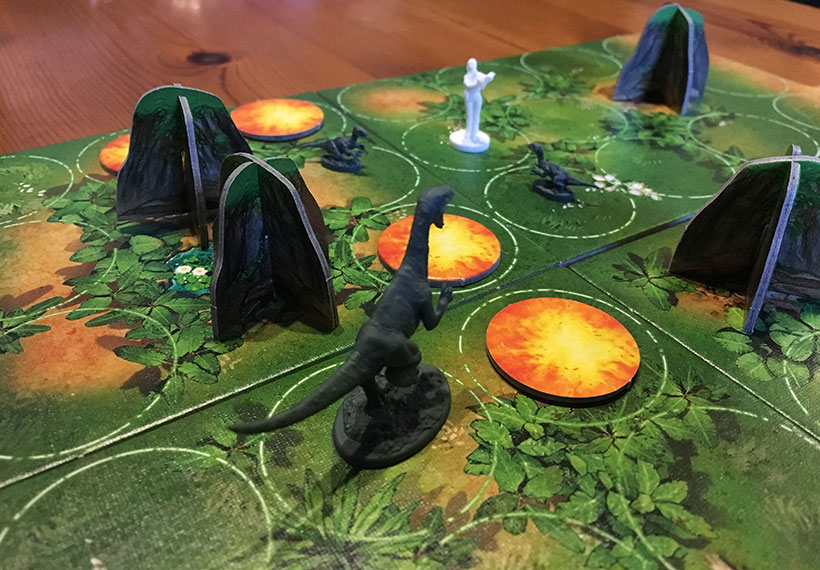 These delicate balance of actions creates a delicious game of cat and mouse where both sides flit back and forth between being the aggressor and defender. The scientists are slow but effective, while the Raptor Mama is fast and powerful, but has the babies to look after.

Ultimately though the balance does seem to favour the scientists, especially if they are able to flood the board with reinforcements. Despite this, it is fun to play either side. You only select from one of three cards at a time which adds some luck and chance into proceedings. I like this but I know some want to choose from all their cards rather than being limited. For me though, there is a meta game in trying to remember what cards have been shuffled back into your opponents deck and what they are likely to have available in their hand.

Use of your tools is incredibly important, be that fire, tranquillisers or the jungle. You want to stay unpredictable enough and use your cards at the right time. At different times you will want your normal actions and others the card actions, so when you play your cards is vital. If you can get eight actions then that can be a game changer.

The boards are double-sided and can be spun which adds some variety to the game. Plus you are likely to play at least two games, swapping roles in-between them. Components are good and the rule book is clear with player mats acting as game aids too.

Hold on to your butts - Thoughts on Raptor

Raptor is a great two player game. The tug of war nature of the game, and clever card play make for a quick and intense experience. There is some luck in the drawing of cards but as you only have nine cards anyway you can play for future turns. It's a game that looks harder to teach than it actually is, and people 'get it' after one round. It is wise though, to remind players that the lower card number takes the card action, and the higher card a number of general actions.

If I had some criticism it would be with replay value. Although the game is different each time in terms of minor layout changes, these don't make a huge difference. Also once you have seen all the cards and their actions you kind of know the flow of the game and how to counter them. I don't see Raptor as a game you will binge play which alleviates this a little, but it would be nice to have some alternative set ups in terms of objectives.

The theme is really good, with actions making sense for each side. I like games that use this kind of number play in their cards and give you a growing information pool from which to make your decisions. If you are after a back and forth battle of wits with an interesting theme then pick up Raptor.

Nick can also be found at Board, Deck & Dice