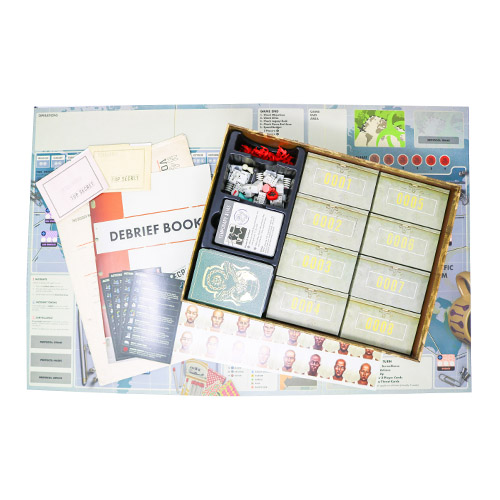 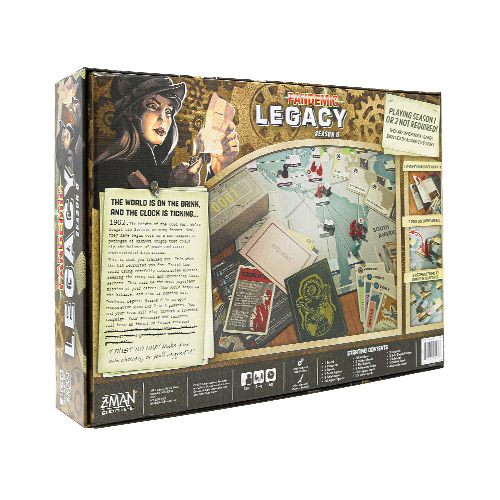 you could earn 5779 victory points

you could earn 5779 victory points

Pandemic Legacy: Season 0Ask any gamer to name a co-op game and they will more than likely say Pandemic. Pandemic sets you and your friends the unenviable task of managing an epidemic. Taking on a specialist role with a unique power, you travel the world trying to effective combat outbreaks and cure the disease. Pandemic spawned a number of games based on the original game. Hot Zone…
Read More
Category Board Games Tags Best Sellers, Dice Tower, Golden Pear, Pandemic, Spy Games, Z-Man Games SKU ZBG-ZMG7174 Availability 5+ in stock
Share
Share this
96%

Ask any gamer to name a co-op game and they will more than likely say Pandemic. Pandemic sets you and your friends the unenviable task of managing an epidemic. Taking on a specialist role with a unique power, you travel the world trying to effective combat outbreaks and cure the disease.

Pandemic spawned a number of games based on the original game. Hot Zone - North America captures the essence of the full game in 20 minute play sessions, whereas Rising Tide, Reign of Cthulhu and The Fall of Rome all add thematic twists on the gameplay. Arguably the most well known tweak is the Legacy games.

Legacy games are designed to be played as a campaign where a story evolves over the course of the game, with new rules and gameplay elements added as you go. Lots of this content will be hidden in sealed boxes that you open as you play. Most legacy games include ‘destructible’ elements such as stickers or writing on the board or pieces, or even tearing up cards, permanently altering the game.

Pandemic Legacy was one of the first of these types of games and was met with huge success. The game allowed a story to develop that delivered twists and turns and was continued in the second game - Season 2. Pandemic Legacy 0 takes us back in time to the Cold War. Players are recruited by the CIA to investigate a Soviet bioweapon nicknamed ‘Project MEDUSA’.

Due to the theme you will not only be combating the pathogen but also enemy agents who seek to disrupt your work and cause world chaos. As it is a prequel you do not have to have played the previous Pandemic Legacy games to enjoy Season 0 but be warned - you may end up buying the other two after completing this one.

Published by Z-Man Games, the Pandemic series of games is one of the most famous you can find. With the sheer number and variety of games on offer in the series, it's difficult to find a version you don't like. And now, somehow, Z-Man have gone and made a Pandemic so incredible that I just couldn't get enough of it… even in the middle of a literal pandemic.

The third and long-awaited final instalment to the Pandemic Legacy family, Pandemic Legacy Season Zero is the crowning jewel of the trilogy, rounding off the series with a real bang. Set during the Cold War, Season 0 has players sharing intel and 'neutralizing' soviet agents as they uncover the mysteries behind 'Project MEDUSA'. With delightful new twists and turns, Season 0 is a prime example of what a legacy game can and should be.

From Russia With Love

Fans of the first Pandemic Legacy will be pleased to know that the core mechanics haven't changed too much. Unlike the slightly more divisive and daring Season 2, Season 0 is much less experimental than its post-apocalyptic counterpart. However, unlike before, players will now be cashing in city cards to create teams. Each city is given an affiliation, either Soviet, Allied, or Neutral. These teams go round mopping up wandering spies across the board, as well as helping to complete tasks and meet objectives.

Aside from this, the structure of the game is broadly the same. Twelve months of objectives and a veritable horde of secrets and hidden components. This time, however, there is an eye-watering quantity of components. Throughout the game, you will unlock the safe deposit boxes, open sealed doors, place stickers, add rules, alter your character, and just so much more. You'll even be discovering secrets and opening doors you weren't even aware existed.

Pandemic Legacy Season Zero also adds just a little more light-heartedness to its gameplay. Unlike in the other Legacies, you aren't burdened with the worry that cities could be wiped from the map. And you don't have to worry that your character could just die. Don't get me wrong, this game is steeped with tension, but there is just so much more room for fun. There is also a huge sense of world-building throughout. As in every legacy game every action has its consequence, which ripples throughout the game. Now you have even more autonomy. From better personalisation on your character passports to cards of questions from your 'senior officer', Season 0 is all the best bits of previous games brought into one.

Pandemic In The Land Of The Soviets

It would be wrong to do a review of any of the Pandemic Legacies without mentioning the Legacy Deck. This seemingly regular pack of cards is the beating heart of the game's engine; the very thing around which every component revolves. Whereas Season 1 came with one deck, Season 0 comes with two. It is testament to the sheer size of the story that it couldn't be contained to just one deck.

As well as these two there is the Operations Deck. This contains a ton of supplementary detail to the story and your objectives. These decks show off the sheer genius that has gone into writing and creating this game. Not only do they work so well together, but the decks drive the story forward perfectly. The game progresses at just the right speed with just enough content, not too fast and not too slow. This means that the story itself is front and centre, and boy is it a treat to play.

Each month showcases something new that you didn't see coming. Even in the later months, I was amazed at how much new stuff was hidden in the game. Even when the end is drawing in, there's still some unexpected twist to keep you on your toes. This is one of Season 0's best features. Not only is the box just packed with content, but all of it comes in handy and it is all revealed at just the right moment to keep the game feeling fresh. We have all encountered games that just feel a bit tired after a couple of playthroughs, but with Season 0 I was constantly excited for the next game.

To complement the juicy story, the box contains a treasure trove of goodies in the way of components. Every aspect, from the very board down to the tiniest token is a joy to use. Every single component hits the brief perfectly and fits the theme of the game to a tee, with every piece having its place. The design is spot-on, and everything fits the 60's feel. The muted shade of the teams helps them blend in perfectly. The blaring red agents stand out immediately and you can instantly recognise them as 'the Soviets'. While these things might seem trivial, when you have a game set up in front of you, it's impossible to miss how flawlessly it all just works.

To conclude, Pandemic Legacy Season Zero is the shining gem in one of board gaming's best series. Being both the third instalment and a prequel, it beautifully brings the Legacy trio to a close, beginning and ending it with one hell of a flourish. Season 0 shows off the creative genius of Rob Daviau and Matt Leacock at its height, it showcases everything a legacy game can and should be. If there was ever a reason to get a gaming group together, this game is it. With just the right amount of seriousness and tension intermixed with the fun of gaming, Season 0 sets the standard, and new legacy games have got one hell of a job to meet it.