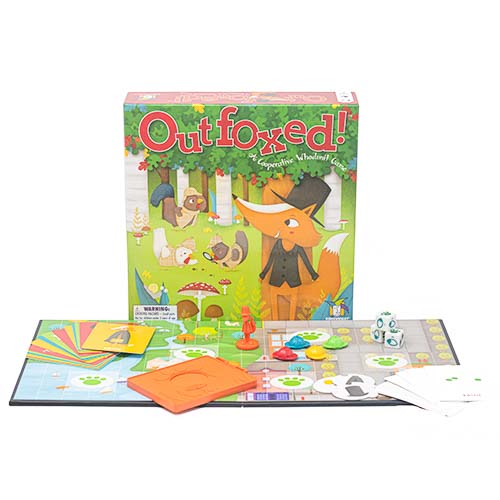 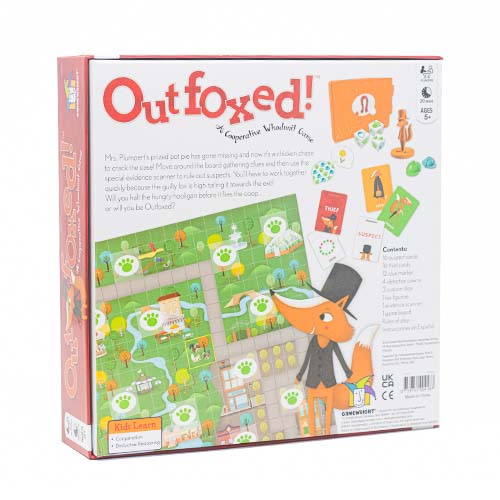 A crafty fox has stolen Mrs Plumpert’s prized pie and it’s up to you and three friends to catch the thief before they get away – will you succeed, or will you be Outfoxed!? Outfoxed!, designed and published by the team at Gamewright Games, is a 1-4 player co-operative whodunit aimed at families with younger children. Working as a team, players will need to choose betwe…
Read More
Category Board Games Tags 3-5 Years, 6-8 Years, 9-11 Years, Best Sellers, CoiledSpring, Fun for Kids, Gamewright, Zatu Platinum Award SKU TCS-OUTF Availability 3+ in stock
Share
Share this
90%

A crafty fox has stolen Mrs Plumpert's prized pie and it’s up to you and three friends to catch the thief before they get away - will you succeed, or will you be Outfoxed!?

Outfoxed!, designed and published by the team at Gamewright Games, is a 1-4 player co-operative whodunit aimed at families with younger children.

Working as a team, players will need to choose between searching for clues and revealing suspects. They then need to roll three custom dice to see if they are successful. If after three tries the dice all match the decision you made your investigation progresses.

Reveal suspects – the dice have shown three fox eyes. These lead you to two more suspects, but how will you know which foxes are innocent and which might be guilty? There are 16 suspects, finding the thief will take all your powers of deduction.

Search for clues – the dice have shown three fox paws. These lead you to a range of clues. Is the thief wearing gloves? Maybe the thief uses a monocle and is carrying an umbrella. There are 12 clues to find but not all will help your investigation. Some clues are red herrings!

Use the clue decoder to find out if the clues point to the guilty fox. Once you have found enough clues, it’s time to reveal who you think the thief is.

If you are unsuccessful in your search for clues and suspects the wily fox moves closer to the exit. When he or she reaches the foxhole, the thief has escaped along with the prized pie. Better luck next time!

Wily, sly, cunning. Foxes get a bad rap, don’t they?

Foxes are intelligent, resourceful predators that adapt well to new environments. However, their proximity to human settlements and taste for poultry has led to stereotypical depictions in the media.

This is very unfair! After all, it’s hardly their fault we herd chickens into a handy container. And if one of those chickens just happened to be baked into a prized pot pie, we can’t really blame them for being tempted, can we?

Now, if said prized pot pie was left on the windowsill next to an open window…well, that’s just asking for trouble.

Someone Stole My Pie!

In Outfoxed!, a 2-4 player co-operative whodunit game, players are searching for clues and revealing suspects in the mystery of who stole Mrs Plumpert's prized pot pie. No less than 16 suspicious looking foxes were seen in the vicinity of the crime and it’s up to us to find the guilty party before he, or she, escapes down the foxhole.

Reveal Suspects draws two more foxes into the investigation. Look for Clues will allow players to use the Clue Decoder to determine which foxes are innocent and who is guilty…

However, if those dice don’t match the thief moves closer to the foxhole with his tasty haul. If the identity of the thief isn’t revealed by the time they get to the foxhole, they will escape!

Do you Feel Lucky, Fox?

Designed and published by the team at Gamewright Games, Outfoxed! is a clever, colourful, introduction to co-operative games. Combining simple to understand dice rolls with the gentle trial and error deductive puzzle of matching the right clues to the right foxes.

The challenge comes from matching the clues – hats, umbrellas, other objects – to the suspects before time runs out. It's almost a 'press your luck' mechanic. How many clues can be gathered, and suspects revealed before luck runs out and you are forced to guess who the thief is?

Outfoxed! is a parent friendly game very much aimed at children in the 5–8 age range. That difficult age where they are just about old enough to start to play with Mummy and Daddy’s toys but sadly lack the attention span needed for Sherlock Holmes Consulting Detective.

It ticks all the boxes a board gaming parent could ask for in a kids’ game. It’s not too long, meaning it can be played in the post bath, pre-bed period. The kids play on the same team as their grown-ups meaning the family all win or lose together. Best of all, there isn’t a single battery in sight.

Those of you who read the words ‘Clue Decoder’ and felt a shudder run down your spines can rejoice. This isn’t a cheap, noisy, battery eating machine. Instead it is a nifty manual gadget that allows cardboard clue tokens to be combined with a ‘thief card’ to reveal if a clue is relevant. Green for safe, red for thief. Simple and tremendous fun for the kids, who practically queue for the chance to slide the slider.

In addition to the Clue Decoder, there is a game board and a range of tokens, cards and pawns in Outfoxed! There is even a fox miniature wearing - presumably to accentuate its guilt - a top hat. All of these components are good quality and visually this is a very appealing game.

The rules are clear, concise and easy to understand. The box insert is clever and fits all the pieces perfectly. Really, everything about Outfoxed! adds up to a great, great, kids’ game.

If you really wanted, it is possible to, if not break the game completely, then at least hasten the play time of, Outfoxed! The game board has multiple locations that need to be searched for clues. Movement between these locations is determined by the number of paws shown in the dice roll. So far, so good.

Except there is nothing in the rules that says every location should be visited in order to find all the clues. There is also no mention of needing to move at all when revealing suspects.

With the minimum movement being three (one paw per die) it is possible for one player to bounce between two locations to find all the clues while another stays still to reveal all the suspects. Minimising movement on the part of the players and leaving only luck to determine how long until the game ends.

Now maybe this is being too picky. This is, after all, a children’s game and perhaps we shouldn't look for ways to crack it's mechanics. Perhaps we should let our kids take along for the ride as they do their best to solve this case. Depending on your point of view, perhaps being able to shorten the playtime is actually a good thing. But I will leave it up to you to decide whether that sixth consecutive game before bed needs finishing a little more quickly.

On a more serious note, depending on the age of your children, longevity may be an issue with Outfoxed! Being so squarely aimed at the younger age groups it will have a limited lifespan as the kids grow up.

For the specific age range it's aimed at, however, Outfoxed! has proved itself to be a genuine smash hit. Both charming and hugely re-playable, this is one children’s game that I will keep in the collection long after the kids themselves have grown.

A blast of fresh air in a niche dominated by branded mass market cash-ins. While it may lack the all ages appeal of some of Gamewright’s other family classics like Sushi Go and Forbidden Island, Outfoxed! opens the world of hobby board gaming to a younger age range.

Overall, this is an excellent children’s game and is heartily recommended.