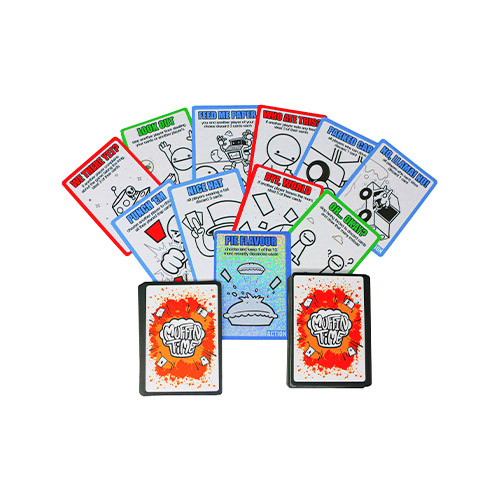 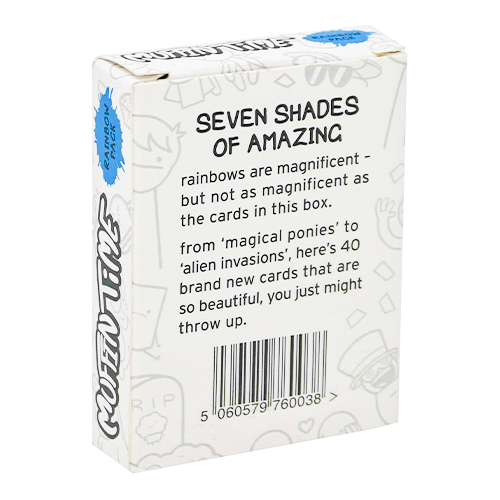 you could earn 529 victory points

you could earn 529 victory points

Muffin Time: Rainbow PackMuffin Time is a chaotic card game collaboration between asdfmovie creates TomSka and kings of the party game, Big Potato. It had a very successful campaign on Kickstarter, and it’s easy to see why. TomSka’s animations are popular on Youtube and his simple but lively art looks great on the cards.Despite the look of the art, the game does has some macabre…
Read More
Category Board Games Tags Best Sellers, Big Potato, Family, Party, Stunning Artwork, Zatu Gold Award SKU ZBP-RAINBOW Availability 3+ in stock
Share
Share this
81%

Muffin Time is a chaotic card game collaboration between asdfmovie creates TomSka and kings of the party game, Big Potato. It had a very successful campaign on Kickstarter, and it’s easy to see why. TomSka’s animations are popular on Youtube and his simple but lively art looks great on the cards.

Despite the look of the art, the game does has some macabre themes, with some dark humour, and of course farting and bottom humour, but it is not only that and certainly not overdone. To win the game you must get exactly 10 cards in your hand and announce ‘Muffin Time’, then if you still have 10 cards at the start of your next turn you win! Of course, you have just painted a big target on your back!

This is because Muffin Time is a game with a lot of player interaction, coming firmly under the ‘take that’ genre. It also is more chaotic and silly that a lot of modern board games. As such it’s one to enjoy during the sillier moments of game night or on a night with some gaming newcomers. The humour and madness all combining to create a memorable experience with many laugh out loud moments.

Some of the most interesting cards involve mini games where players will be thrust into a mini challenge with consequences for the losers. Learning the game is easy and the instructions for how the cards work are clearly written on the cards themselves.

Muffin Time offers a confident and fun alternative to chaotic party card games, like Exploding Kittens and Fluxx. It’s the kind of game that everyone needs at least one of in their collection and Muffin Time might just be the best.

This ‘Rainbow Pack’ adds more variety to the game with 40 more cards including 1 holo card and 3 blank cards for you to design your own content!

The routine and the chaotic are poles apart, and people prefer one or the other. Those for routine enjoy knowing when, where, and why. It gives stability and purpose to the little moments in life and ensures there's some control where possible. Removing any of these three questions' answers instantly throws some chaos into the mix. No control. No understanding. All madness. It makes things exciting, risky, unpredictable! And how better to demonstrate the chaos in board gaming than through a deck of cards. Specifically, Muffin Time! However! It only has so many cards as a core box. There's potential for prediction (not really but run with the drama here...) so inevitably you'll need the Rainbow Pack expansion. It adds 40 more cards and a truckload of ASDF references, too!

To add more Rainbows into Muffin Time, you simply shuffle the Rainbow Pack into the main deck. The original box has the scope to hold all the expansions currently available, so you won't be squashed for space. Once that's done, you're ready to rock and roll! Let's do this!

The Rainbow Pack gives you more punches to throw, catch and punish. And of course, more ASDF references for you to bask in. You'll be singing more jingles and chuckling to yourself as you draw cards all over again. We don't believe you'll ever manage to see all the Muffin Time cards, or remember them all, but the Rainbow Pack adds more variety and ups the spiciness just that needed notch! The Pie Flavour pack gives you another 40 slices of madness. It's more of what you adore, love, and thoroughly enjoy.

The Muffin Time Rainbow Pack throws in more traps that will ruin your opponents' days. What's interesting here is the varied balance of "you do" and "opponent does" triggered cards. There are almost equal numbers! The cards which rely on you doing something to catch someone out are wonderfully obscure and, in any other game, would make your family admit you to an asylum. However! Because of the nature of Muffin Time, everything and nothing has a purpose.

You can easily catch people out with the mundane, routine stuff, but here is where the more 'out there' actions will seem trustable. Plus! Cards like Just Friends will add on the bonus of either starting a loving relationship for you or punishing the heartbreaker. And, arguably the most powerful trap we've seen, Card Sick is in this pack. It's ridiculous! You have to start your turn with 10 cards. Card Sick triggers when you have more than 10, resulting in you discarding the excess. Suddenly, you're living the high life on the way to winnersville! These are easily some of our favourite traps in Muffin Time, and they add that extra bit of oomph to an already hard-hitting take-that game.

I'm Gonna Do An Internet!

Like in the Muffin Time core game and Pie Flavour expansion, Action cards are plentiful and diverse. Actions orient around manipulating the numbers of cards people have and result in multitudes of gaining and losing. Or, they are just evil and punish a single individual. Whichever flavour you're playing, you're going to upset someone. What's more, this expansion references the ASDF elements that weren't mentioned in the previous two components of Muffin Time. Not to say that this covers every base, but it will undeniably get you singing again!

The Rainbow Pack adds in a few more mini-game action cards to spice things up further (which, in Muffin Time, is like adding more ghost peppers to an already scorching vindaloo). Oh No! is my personal favourite, as it gives the most to gain. By simply guessing how many action cards someone has, you steal them all, reducing the risk of being punished by them, and enhancing your options! There's also a lot of reference to Magical Ponies here, whether you're playing it or taking it. And what Muffin Time experience would be complete without a holographic card? Named after its own expansion, Rainbows allows you to steal cards from players wearing a specific colour, enabling you to gain a lot of cards and judge people's fashion choices.

No, You're Getting Robbed!

This pack doesn't give as many Counter cards as the core game did. However, these cards are always the most coveted because of their universal application, the take-that to any take-that card you're hit with. Some are actively played, others trigger when greedy hands take them, and some are oddly specific. No two are the same, and all punish actions like a slap in the face.

The most notable of these are Chase Me and Shoot It Down. Chase Me is a group favourite for us because once it's been in play it'll be taken from the discard whenever possible. If you steal Chase Me, you lose your whole hand. We have had scenarios where someone has lost through their own greed. This is a beautiful moment where defeat is snatched from the jaws of victory! Meanwhile, Shoot It Down is tremendously specific but wonderful to use. Should someone be daring enough to whip out a Magical Pony, you not only stop it but also use its effect. And as everyone knows, shooting a flying pony out of the sky is an instant day ruiner. No one wants that.

Rainbow Pack adds more to what you love from Muffin Time. Is it essential to play? No. Do we think you need it? Yes, absolutely, 100%. More variety is never a bad thing, and with a game centred wholly on burning through cards until you have 10, it's wonderful to know that you may never see them all. Rainbow Pack adds to those numbers, and to the comedic and enjoyment factor available. The best part is that you can now purchase Rainbow Pack with both the base game and second expansion in Muffin Time - 2021 edition.

Editors note: This blog was originally published on June 23rd, 2021. Updated on September 21st, 2021 to improve the information available.