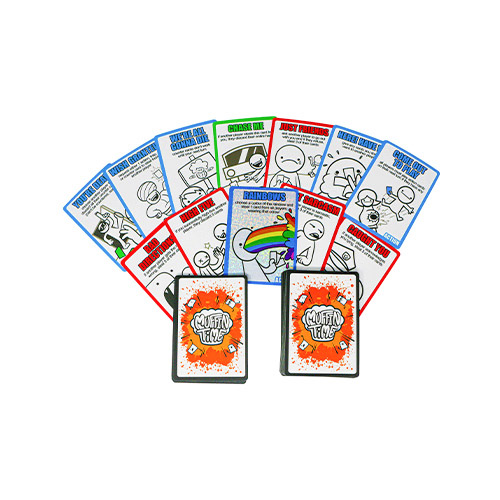 you could earn 699 victory points

you could earn 699 victory points

Muffin Time: Pie Flavour PackMuffin Time is a chaotic card game collaboration between asdfmovie creates TomSka and kings of the party game, Big Potato. It had a very successful campaign on Kickstarter, and it’s easy to see why. TomSka’s animations are popular on Youtube and his simple but lively art looks great on the cards.Despite the look of the art, the game does has some mac…
Read More
Category Board Games Tags Best Sellers, Big Potato, Family, Party, Zatu Gold Award SKU ZBP-PIE Availability 3+ in stock
Share
Share this
83%

Muffin Time is a chaotic card game collaboration between asdfmovie creates TomSka and kings of the party game, Big Potato. It had a very successful campaign on Kickstarter, and it’s easy to see why. TomSka’s animations are popular on Youtube and his simple but lively art looks great on the cards.

Despite the look of the art, the game does has some macabre themes, with some dark humour, and of course farting and bottom humour, but it is not only that and certainly not overdone. To win the game you must get exactly 10 cards in your hand and announce ‘Muffin Time’, then if you still have 10 cards at the start of your next turn you win! Of course, you have just painted a big target on your back!

This is because Muffin Time is a game with a lot of player interaction, coming firmly under the ‘take that’ genre. It also is more chaotic and silly that a lot of modern board games. As such it’s one to enjoy during the sillier moments of game night or on a night with some gaming newcomers. The humour and madness all combining to create a memorable experience with many laugh out loud moments.

Some of the most interesting cards involve mini games where players will be thrust into a mini challenge with consequences for the losers. Learning the game is easy and the instructions for how the cards work are clearly written on the cards themselves.

Muffin Time offers a confident and fun alternative to chaotic party card games, like Exploding Kittens and Fluxx. It’s the kind of game that everyone needs at least one of in their collection and Muffin Time might just be the best.

Add this Pie Flavour pack for more variety with 40 extra cards including a holo card and 3 blank cards for your own creativity to run wild and make your own cards!

Ready to delve back into the madness and insanities that is Muffin Time? No? Well too bad. It's about time you grew up and smelt the metaphorical coffee that is madness. And this particular blend of madness is Pie Flavoured! (As dictated by the expansion's name). Big Potato's Muffin Time is about to get a whole lot bigger when you add in the Pie Flavour expansion. 40 cards worth of bigger! It doesn't increase game time or player count, but adds in a whole lot more of what you love. ASDF goodness!

To get Muffin Time a bit more Pie Flavoured, you simple shuffle the Pie Flavour pack into the main deck. The original box has scope to hold all the expansions currently available, so you won't be scrambling for space. Once that's done, you're ready to play!

The Pie Flavour pack adds in a whole lot more of what you loved from Muffin Time. More cards, more ASDF, more madness! Because this expansion focuses wholly on more of the original content, we've broken this review down into the three types of cards. Traps, Actions and Counters.

You Activated My Trap Card!

The traps added from the Pie Flavour pack add more inanities and opportunities to catch you opponents out. Remembering that most the traps from the core game focussed on actions, happenings and people's choices, playing Muffin Time can feel quite the minefield. You can't sneeze comfortably, reference the rules safely... heck, you can't even breathe without someone flipping a card! So does the Pie Flavour offer some respite from this? Ha! No. Not even slightly!

The Pie Flavour pack has a heavy emphasis on discussion and movement based traps. And Big Potato are no amateurs at knowing what happens at a games night. Leave the room? Lose five cards. Mention cats! Lose three cards. Put your hand down? Get it stolen! There's a wonderful amount added into the core experience. Nothing that was missing, but everything is of course welcomed.

Take This! And That! And One Of Those!

The actions added here do have some uniqueness to them. Bear in mind that I haven't studied every card in the core game to the point I remember them all! The action cards provided in this expansion have a nice to and fro to them. If one card enables players sporting a hat to pick up cards, another will do the opposite! It may seem counterproductive to have two cards as such in the game, but with so many cards in the main deck you aren't going to see them both in succession. It makes for a far more eventful game (in an already eventful game) and impacts more of the players' choices.

The Pie Flavour pack's counters centre around the same as all over counters. Doing something in response. It's not always helpful, nor is it guaranteed to impact your progress positively, but it's a thing you can do! However! This game isn't always what you expect... With Muffin Time being wholly centred on the mechanic of take-that and a victory condition of having 10 cards, sometimes the bad counters are the best.

Counters don't just impact the player who played them. Take that goes hand in hand with the beautiful emotion of spite like a pie in a pie. You see someone casually sliding into the 10 card zone and naturally want to end them. If you see someone use an action for a guaranteed win, hit them with the old 'no one likes you card' to banish it away forever. Watching someone mug another player! Slap down that 'look out' card to seem like a real hero and ensure no one wins. Or prevent someone from losing cards and keep them way above 10 with the classic 'don't jump' card!

Is There Some Beauty In The Pie?

Muffin Time's whole theme is the ASDF movies. Ridiculous inanities, light (and sometimes dark) humour, and a charming aesthetic to it all. None of it is offensive, all of it is silly. And, being blunt, you don't need to have seen them to appreciate the game's visuals.

As someone who has seen the ASDFs, I get the references. They're quality and well executed when coupled with their card effects. Of course, I could spend a good few hundred words explaining the jokes, lore and hidden history of the characters from the ASDF movies... but it'd be easier for you to either watch them, or enjoy the art fun blissful ignorance. You'll still get a chuckle from the cow who says meow meow, so all's not lost.

The Pie Flavour Pack is more of what you need from the core of Muffin Time. More skateboard cow, more pie flavoured pies, more lightly darkened humour about knives and strangely behaving physics. The thing we loved the most was that it didn't complicate a game we loved. Muffin Time is still Muffin Time, even though these cards are now embedded in the deck. We don't dread knowing they're there, and, if anything, it guarantees more surprises and more cards we won't have seen before!

The game is already incredibly accessible, and this adds in cards that are as easy to access as those in the original. However, by diversifying those cards further with more hilarious references, more take that, and more pies, you can't go wrong!