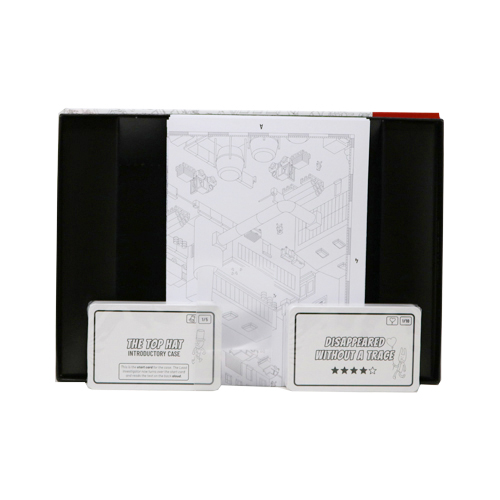 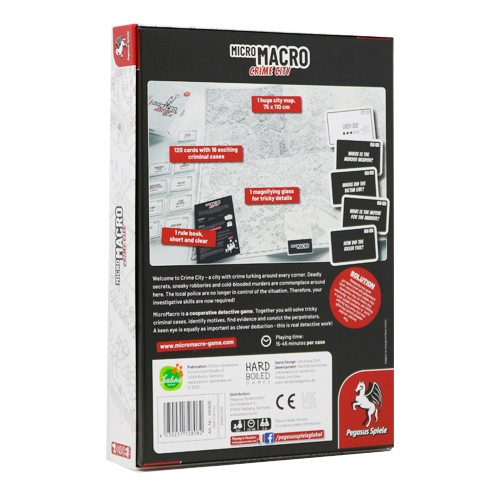 you could earn 1645 victory points

you could earn 1645 victory points

Crimes happen in the city! With the view for details you’ll be searching for facts: Look for the scenes that provide you with the correct facts to solve the crime cases! The giant city map (75 x 110 cm) is home to a myriad of hidden information. Different difficulty levels lead the players step by step into the game. Players must work closely together to find out what happened…
Read More
Category Board Games Tags Best Sellers, Co-operative, Family, Pegasus Spiele, Podcast Approved, Spiel des Jahres, Value For Money, Zatu Gold Award SKU ZBG-PEG59060E Availability 3+ in stock
Share
Share this
89%

Crimes have taken place all over the city! You want to figure out exactly what's happened, so look closely at the giant city map (75 x 110 cm / 29.5 x 43 inches) to find all the clues and trace the trails of those who had it in for their foes.

MicroMacro: Crime City includes 16 cases for you to solve. Each case includes a number of cards that ask you to find something on the map or uncover where someone has gone or otherwise reveal information relevant to a case. The city map serves as a map in time as well as space, so you'll typically find people in multiple locations throughout the streets and buildings, and you need to piece together what happened, whether by going through the case card by card or by reading only the starting card in the case and trying to figure out everything that happened for yourself. Will you be able to answer all questions about the case without fail?

MicroMacro Crime City designed by Johannes Sich and published by Pegasus Spiele is a cooperative detective game. Designed for one to four players, together or alone you'll be tasked with solving 16 tricky criminal cases by identifying motives, finding evidence and convicting perpetrators. A keen eye is equally as important as a clever deduction.

Inside you'll find a huge black and white city map, which folds out to a whopping 110cm width x 75cm height. The wonderfully brief rulebook advises putting it on a large surface with good lighting. Personally, I found sticking it to a wall was much easier and avoided blocking the view of others when leaning over a table. The map also has a grid reference around the edge, which makes things infinitely easier to keep track of.

There are 120 cards, which make up the 16 criminal cases you'll need to solve, each with varying difficulties (rated one to five stars). You'll also get 16 envelopes to sort the cases into, which obscure the text to avoid any spoilers. That said, they don't completely mask the text so you'll need someone with strong enough willpower to resist reading the answers.

The aforementioned short rulebook, which is a folded A4 piece of paper that covers everything you need to know clearly and concisely. A magnifying glass rounds off the contents, some of my group found it useful and some didn't.

You'll start off by unfolding the city map and ensuring there's plenty of space and lighting. Next, you'll assign a Lead Investigator. They still investigate the map with everyone else. But also have the task of reading out objectives, advancing the case and ensuring no spoilers are given.

The Lead Investigator then takes a case out of an envelope and reads aloud the top card, which gives an overview of the cases and, on occasion, subtle clues. The top card is then turned over and the team receives its first task. This will always start simply with locating a person or building... or a body. Once the team believes it has completed a task the Lead Investigator turns over the card. If they are correct the case continues, if they are incorrect the team goes back and tries again. But the Lead Investigator cannot continue as they now know the solution to that part of the case. They must wait for the rest of the team to get the task right before joining back in.

Each case follows this formula until their conclusions. More difficult cases have more steps with fewer hints. In earlier cases, you'll be giving an area to search, with hints like "between the market and the hardware store. As the difficulty of the cases increases the cards become vaguer. In one case my team had to identify all the things a couple did throughout their day. We weren't told how many things needed to be found or where to start. This led to faces almost touching the map as everyone scrutinised every footstep the couple took.

MicroMacro Crime City is a fantastic game with an art style that is simple yet striking. The map is extremely detailed without becoming muddled or confusing. A handy short mystery on the cover of the box is a great way to get people who may not usually play board games to have a quick go. Then you can bring out the giant map for a proper session.

Early cases serve as a way to orient players around the map. It allows them to familiarise themselves with the layout while remaining fun. The more difficult cases are an excellent challenge that give a great sense of satisfaction when solved. Especially the five-star cases.

The box states the game is for one to four players. My only gripe with this game is playing solo. It leaves no margin for error, if you get part of a case wrong you can't go back and try again as you'll have already read the answer. It can be fun going back and finding out where you went wrong, but it's not the best way to play.

Each case is estimated to take between 15 and 45 minutes to complete. This is true of laters cases, but me and my team managed to get through the first six in just under half an hour. On the plus side, once you complete all the cases you can visit the MicroMacro website and sign up for a newsletter. They'll then send you extra print and play cases to continue the fun. Or, you can pick up the shiny new sequel MicroMacro: Crime City - Full House.

Editors note: This blog was originally published on May 25th, 2021. Updated on October 7th, 2021 to improve the information available.