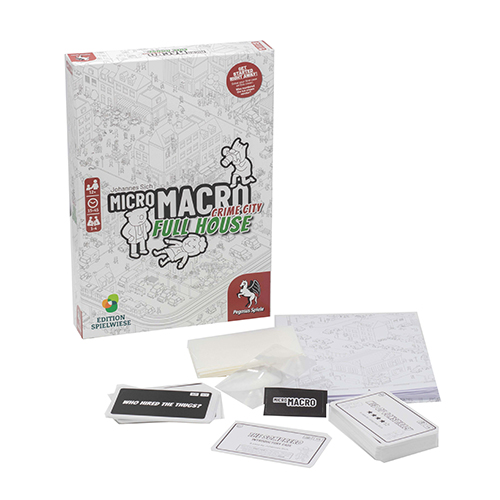 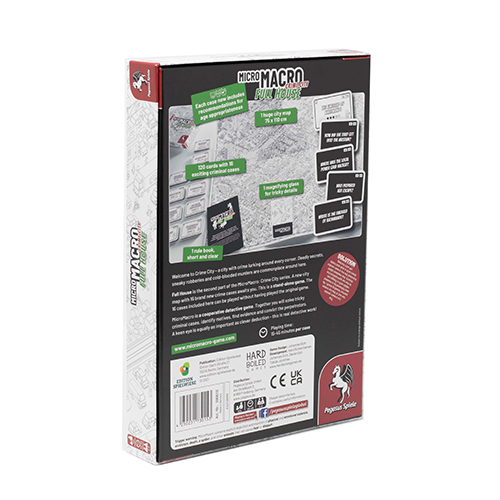 There’s been a murder in Crime City! Use the clues given to you and piece together what happened. Was it a poisoned hot dog? A stolen bag? It’s up to you to track the crime from end to… start? MicroMacro: Crime City is a hugely successful deduction game where you’re given a map and a series of clues. The map contains 15+ cases to complete, all hidden and trailing around the …
Read More
Category Board Games Tag Zatu Silver Award SKU ZPG-59061E Availability 3+ in stock
Share
Share this
79%

There’s been a murder in Crime City! Use the clues given to you and piece together what happened. Was it a poisoned hot dog? A stolen bag? It’s up to you to track the crime from end to… start?

MicroMacro: Crime City is a hugely successful deduction game where you’re given a map and a series of clues. The map contains 15+ cases to complete, all hidden and trailing around the city. MicroMacro: Crime City - Full House is more of the same, but with a brand new district of the city! The game works as both an expansion to the original, and as a separate experience.

Starting each case, you’re given something on the map to find, Where’s Wally style. This is your entry point. From here, you can read the rest of the cards to get clues, or piece together the entire case on your own! From a murder in a back alley, can you find the culprit’s house, as well as the murder weapon and the stashed loot? Almost every character in the map has a story, not just the criminals too! Is someone meeting up with some friends to play MicroMacro in the city, I wonder?

A very useful addition to MicroMacro: Crime City - Full House over the original are the symbols added to each case. This allows parents to decide what is suitable for the kids, and what is not.

MicroMacro: Crime City is back with its second instalment, MicroMacro Full House. Once again the city is rife with crime. From blackmail to affairs from murder to stealing all the footballs. It is up to you to solve the crimes taking place in the city. MicroMacro Full House is a one to four player deduction and crime solving game from designer Johannes Sich and published by Pegasus Spiele with a play time of 15-45 minutes per case.

Full House is a standalone game and features 16 brand new cases to solve. There is a 75 x 110 cm giant black and white map filled with buildings, people, cars, trucks and all sorts of things going on. Each case is broken down into a number of cards. Within this, you use to find clues, suspects and victims to help you solve the crime. The city map is a map in time and space. The same person will often feature in several locations so working out where they have been and what they have been up to could be vital to the case.

Once the players have worked through the case cards and discovered the clues the game ends and players can pack away the game or open another case and go again.

One addition in Full House which isn't present in the original game is the use of symbols to determine the type of content in each case. This can be used to see if it is suitable for younger players.

The core concept of MicroMacro is one that I really enjoy. I love the deduction and crime solving aspect of the case and the way you can follow the daily routine of the people in the city. People argue that this is an activity and not a game. Call it what you will, I enjoy it and I am going to talk about it.

The map is big, like, really big. Great for adding content and fun little pictures but good lighting and even better eye sight is needed. There is a magnifying glass (of a sorts) included but I didn't find this much help. Sometimes I found the detail hard to make out and spot but I found that once I had got "my eye in" things started to become clearer. The map is very well detailed though. There are a lot of city events happening and fun little things to look out for.

Key To The Case

MicroMacro Full House comes with 16 cases to solve. These range from the kids stealing a sombrero to a complicated blackmail plot and murder. One of the neat additions in Full House is a key to detail which cases may be more suitable to a younger player and which may have more sensitive content. This way, if you want to play with younger players, you can select the most appropriate cases. There will be some cases however that would not be appropriate.

The cases are pretty diverse, some are humorous, some not so. Some are fairly straight forward and some are more complex. I found several of the cases were easy to follow and track on the map to find the clues and solve the case. I found others where you had to find a clue with no obvious link to find the answer other than to scour every part of the map. For example, where a particular person lived. Now, it is feasible that I may have missed the trial of breadcrumbs that I was supposed to follow, but I did find these instances not as enjoyable.

Despite a few niggles I had a blast playing through MicroMacro Full House. It feels like you are playing a gigantic Where's Wally game in which Wally changes or moves with each card. Call this what you will; activity or game, I don't mind. I really enjoyed it. I had fun playing it and I would love to see more in this series and expand it out into other settings and locations. A Western maybe? Sci-fi setting or fantasy theme. Pick any theme/location and I am all for it.