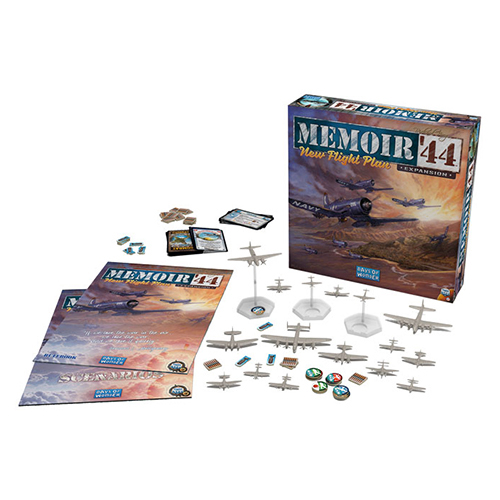 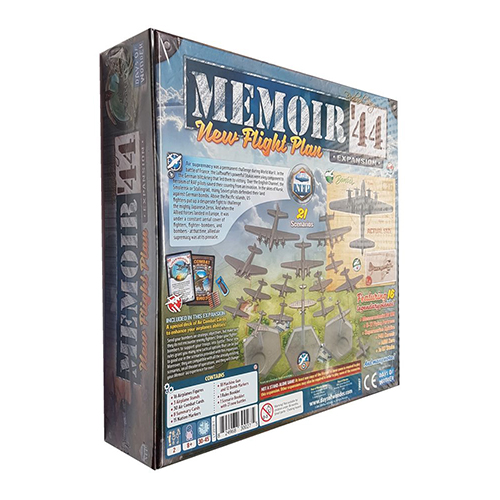 Memoir ’44 is a war game, designed to commemorate the efforts of the men and women who fought in the Second World War. The game makes use of the Commands & Colors (C&C) game system designed by Richard Borg.The system is recognisable for utilising battle dice and a shared deck of command cards. The battle dice enable combat to be resolved efficiently. The command cards …
Read More
Category Board Games Tags Days of Wonder, Memoir '44 SKU ZBG-DOW730027 Availability 1 in stock
Share
Share this
85%

Memoir '44 is a war game, designed to commemorate the efforts of the men and women who fought in the Second World War. The game makes use of the Commands & Colors (C&C) game system designed by Richard Borg.

The system is recognisable for utilising battle dice and a shared deck of command cards. The battle dice enable combat to be resolved efficiently. The command cards form the game engine, driving movement and providing orders for Units. They also serve to create a fog of war effect which add to the realism. Games utilising the C&C system also have a game board that is a hex grid. This grid is divided into three sections: Left flank, Centre, and Right flank.

The New Flight Plan is a major expansion that introduces aerial units to your Memoir '44 battles.

The new rules for air units allow this set to be used with any scenario included in other Memoir '44 products. Please note: A copy of the Memoir '44 base game is required to play with this expansion pack. Some new scenarios included in Flight Plan make use of components found in the army expansion packs: Eastern Front, Mediterranean Theater, and Pacific Theater.

Memoir '44 is renowned as a great military combat game, introducing many players to the genre and being a stand out game for myself. I have always enjoyed strategising and planning as well as learning a little more about history. The beauty of Memoir 44 being that it is historically accurate. New Flight Plan (designed by Richard Borg) aims to let players rain doom upon the enemy and push back troops from objectives, as well as commit to dogfights in the skies above the battlefield, all while including some beautifully designed miniatures!

This is not the first time that planes have been included into the Memoir '44 universe. However, New Flight Plan promises to streamline the existing rules used with the previous Air Pack, all while adding additional abilities and elements to make the game that little bit more interesting. The key thing that makes New Flight Plan interesting is the fact that it can be implemented across any existing Memoir '44 scenario with little to no admin required during set-up.

If that wasn’t enough, the expansion comes packed with 21 new scenarios. However, it is important to note that these will require some additional expansions, such as the terrain pack, but this is, of course, detailed in the rulebook.

The planes included in this expansion (16 in total) fall into three main groups; fighters, bombers, and fighter bombers. There is a nice variety of options to be used in the game. For example, you may use the Supermarine Spitfire alongside the B17 Flying Fortress.

In terms of using planes within the game, the rules have been kept as simple as possible. The planes all move in the same way, however, difference can be found when attacking. Each type of plane will have to roll a certain symbol on the dice to successfully attack ground units. The amount you role depends on if you are attacking ground troops or in a dogfight. The air combat cards also give players unique abilities to be utilised during battle.

In terms of using the planes during a battle, it can initially be seen as an overwhelming force, having an enemy player blast over you in Spitfire. To balance the power of the fighters and bombers, each plane will have a certain amount of ammunition aboard, dictated by tokens. If this runs out, they must navigate off the map, reload and refuel before flying back into the fray. This element of balancing, in my opinion, works really nicely. It brings a sense of realism into the mix as well!

I've used the expansion in a few of the original scenarios already. I'm pleased to confirm that the inclusion of New Flight Plan is fairly seamless. It appears to alongside the other features of the game perfectly. Admittedly, the first game did take some time to get used to. However, as soon as you understand the core additions,you'll be able to switch the expansion in and out with ease.

The new scenarios are also quite interesting. One of the scenarios sees the German player use only planes to halt an allied convoy. There is a nice mix of content in the new scenarios and enough to keep regular players busy for a good while!

I guess the standout feature for this expansion is the actual planes. Unboxing them revealed my inner child and rekindled my love for Airfix. Those familiar with such model kits will get a sense of the plastic models from these, albeit a lot smaller and with no assembly required. Days of Wonder have done a fantastic job in modelling these planes and have gone as far as to make each unique, rather than having generic plane models.

During games, the planes are fitted to clear bases and these are sturdy and fit for purpose. Overall, the quality of the models, especially considering the size of them, is fantastic and gets top marks from me.

My one concern was that many of the scenarios required other expansions in order to play them. However, while this is mostly the case, the fact you can add the air combat into ANY scenario from Memoir '44 completely mitigates this concern. It has been designed in such a way to allow this to happen. So, while the 21 new scenarios have a focus on air combat, you actually open up a whole new treasure trove of scenarios, as adding the plans in can certainly change the tides of war.

Overall, New Flight Plan definitely adds a nice new dimension to an already fantastic war game. It's not revolutionary, however it does its best to switch up player's strategies and to keep the game fresh.

While the price tag is on the higher end of scale, the miniatures included justify the cost. In fact, you get 21 brand-new scenarios, so you do get a fair amount of content for your money!