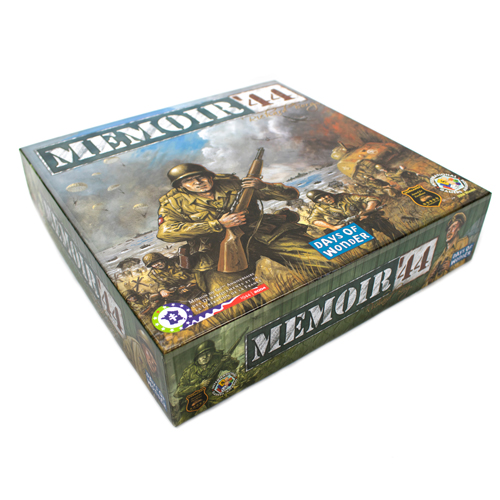 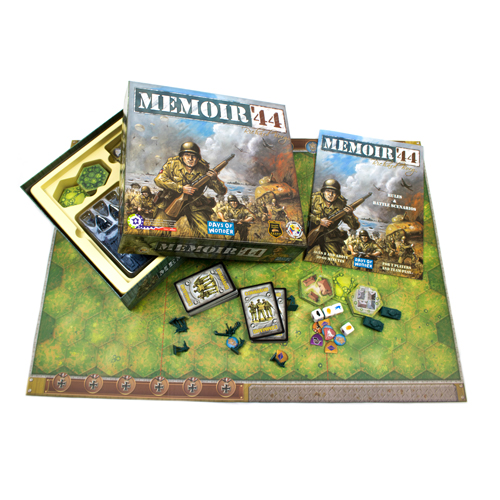 Memoir 44, suitable for two players (but easily expanded to allow team-play), sees you transported back in history to the time of the Second World War. You will take command of either the Axis or Allied army, fighting through stylised battles themed around actual historical battles, such as Pegasus Bridge, Omaha Beach and Operation Cobra. With over 15 different scenarios, each map i…
Read More
Category Board Games Tags Best Sellers, Days of Wonder, Dice Tower, Golden Pear, Memoir '44, Richard Borg, Zatu Gold Award SKU ZBG-DOW7301 Availability 3+ in stock
Share
Share this
80%

Memoir '44, suitable for two players (but easily expanded to allow team-play), sees you transported back in history to the time of the Second World War. You will take command of either the Axis or Allied army, fighting through stylised battles themed around actual historical battles, such as Pegasus Bridge, Omaha Beach and Operation Cobra.

With over 15 different scenarios, each map is laid out using the double-sided game board along with various terrain hexes to simulate the combat area that these armies had to contend with back in WW2.

Memoir '44, from Days of Wonder, has players utilising a deck of cards, with each player having a hand cards which they can use to command their respective armies and deploy their troops. The Command and Tactic cards all have unique uses and skills that can be used by the players, from flanking the enemy, to dropping in paratroopers and calling on the artillery to rain down on an enemy position.

Each move must be considered and it is up to the players whether go on the offensive, and aim to clear out the enemy units, or take a more defensive approach, using the terrain and obstacles to their advantage. Memoir 44 encourages players to employ elaborate strategies to outwit their opponents, while also attempting to gain ground and overcome the enemy force. Each unit is signified by a small plastic figurine and units vary from foot soldiers to tanks.

Each player must also contend with barbed wire and sandbags, something that can allow units to take shelter and hunker down, making the opponent's life very difficult indeed.

Memoir '44 really allows players to engage with these historical battles and operations that took place during World War Two and it does a good job of replicating this. If you are after a historical game with combat at its heart, then this game is for you!

At first glance, the wargaming genre can look like a bit of a minefield (sic); more complex than the Schlieffen Plan, dryer than the sands of the Desert Rats; chits, unit stats, combat-tables, cross-referenced Morale checks, a zillion dice and more flat cardboard squares than you can shake a General's pointing stick at… oh and a pair of bent-end tweezers usually don't go amiss either.

Then there's Memoir 44! Published by Days of Wonder way back in 2004, this is one of the many board game creations using the Commands & Colors system devised by Richard Borg.

This is wargaming light if you like, dispensing with the myriad of complex stuff so beloved of the hardcore numbered-hex monkeys, and distilling everything down to a few simple, easy-to-remember rules, presented in a colourful package of game boards, terrain tiles and plastic miniatures.

The Memoir 44 rule book, coming in at 17 pages, followed by pages of scenarios to play, is beautifully laid out with clear rule and component explanations and nice graphics. It isn't too wordy and hits all the right notes for even the greenest of recruits to the game.

Next, I give you two words: Plastic miniatures! Who doesn't love a plastic miniature? The base game includes Soldiers, Tanks, Guns, Hedgehogs, Barbed-wire and Sand-bags, in American-green and Axis-grey colours. This is the stuff of childhoods (well, my childhood at least)…and no danger of hand-controller RSI or square eyes to be found anywhere in the box.

There's a 70cm x 47cm double-sided game board, featuring the ubiquitous hexes (13 x 9); one side is all countryside-green, while the other features sea, beach and countryside for beach-landing scenarios.

What gives the game replayability are the 44 double-sided terrain tiles, which are laid onto the hexes on the board. Depending on the scenario, they offer an ever-changing landscape of hills, hedgerows, forests, buildings, rivers, beaches and oceans, supplemented by rectangular tiles featuring bridges and bunkers.

There are also a deck of 60 standard-sized 'Command' cards and five custom dice, both of which drive the gameplay and affect movement and the achieving of a given scenario's objectives.

Everything in the Memoir 44 box is beautifully produced. The game board is sturdy and vividly coloured, the terrain tiles are of good thickness and quality, with the miniatures have a good amount of detail. I haven't lost one to a dog or snapped one off its stand yet, and there's a definite satisfaction when you line up a big wedge of tiny tanks ready for a huge assault on a beachhead.

A really nice touch is the cards, which can be laid beside the board for both players to view. They detail each unit type with its movement and attack values, and also hex types, and the restrictions to movement, which means you don't have to hunt through the rule book every time you need to check your next strategic advance… or retreat.

Now, I don't know how you feel about setting games up, but for me it's all part of the journey and Memoir 44 can be a bit of a journey.

The battle scenario maps are well laid out and easy to understand, but there is sometimes (OK, always!) a bit of a time investment required to sort through the double-sided terrain tiles in order to find the ones you need.

If you're super organised (unlike me), I am sure there's a system for sorting and storing the tiles in a way that makes the whole process easier. It's always been my intention to do this, but as of this review, I haven't bothered yet. So every game set-up follows the usual format of shuffling through the tiles to find that last elusive hedgerow or beach tile to complete the map. Then you go through the same process with the units, tanks, guns, barbed wire, hedgehogs and sandbags, though not all are used in every game.

As I said, it is time-consuming, but the sense of satisfaction at the end of it, when you're ready for the off, is worth it. The Command cards are shuffled, the battle dice are placed within easy reach and you're off.

The various scenarios in Memoir 44 have the American army pitted against the Axis army, each side with its own goals over and above simply destroying the opposing forces; perhaps capturing a bridgehead, or moving units off the board at a particular exit hex, with each goal providing that player with a Victory medal.

Each scenario details the mission objectives, the number of Victory medals required, the starting hand of Command cards and who plays first. Play alternates between players and involve the playing of command cards, which dictate which area(s) of the board units can be moved in and how many units can be moved.

The board is divided into 3 'sectors' - Left, Centre and Right, where Left for one player is Right for the other, and both players draw and refresh their command cards from the common deck.

Command cards come in two types. Section cards allow movement of units in one (or more) of the three sectors and Tactic cards provide more powerful options which can benefit the player in any number of ways - terrain restrictions can be ignored; more dice are available during attacks or extra movement for multiple units etc.

Movement is easy, with each unit type having specific movement limits and abilities before, during and after movement. So you could choose to move an Infantry unit (four Soldiers) one hex, then battle against the enemy, or move two hexes and do nothing, whereas Tanks can move up to three hexes and still a battle.

Movement is modified by terrain tiles; either restricting movement, stopping movement altogether or certain hexes being totally inaccessible to certain types of units.

Battles are resolved by the throwing of dice. The number of dice is affected by a number of factors including unit type, unit firing range and terrain, meaning that you always have to consider where you're going and what you want to achieve when you get there - it's all very well making an impressive sweep with all of your tanks on the left flank, only to find that the enemy is in the forest, or a bunker, and you can't actually fire at them because you can't see them.

The symbols make it easy to see the damage you've done (or NOT!) during an attack, meaning there is no head-scratching or table-checking to easily calculate battle outcomes.

I came to war games late on my road to board game enlightenment, but Memoir 44 was my first foray into the genre and is still one of my favourites if I'm looking for something light yet still challenging.

Memoir 44 comes with enough base game scenarios to keep you happy for a long time. It is suggested that after playing a scenario, you set it up again and play the same battle as the opposite army, and with a game running at between 60-90 minutes, it's a good shout for a full evening of entertainment.

You can also play it solo! Check out Board Game Geek for any number of suggestions for how to do it, from simply playing as both sides, to choosing a side and doing some dice decisions or blind card draws for the other army. Of course you could cook up your own house-rules.... Remember: you paid, so you play it how you like.

Whichever way, if someone offers you the opportunity to spend the night trying to rewrite history and change the outcome of Operation Market Garden, don't pass it up.

What's the worst that could happen…?

This blog was originally published on Aug 22nd, 2017. Updated on May 18th, 2022 to improve the information available.