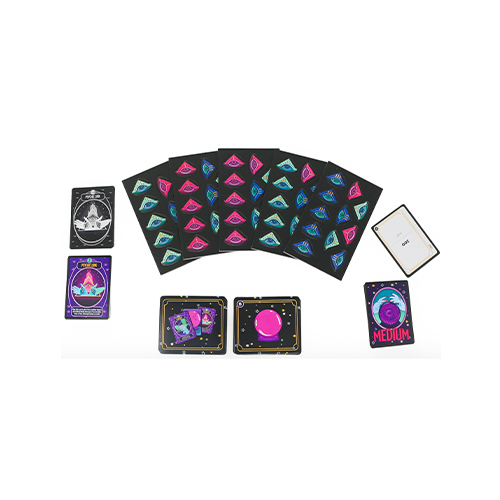 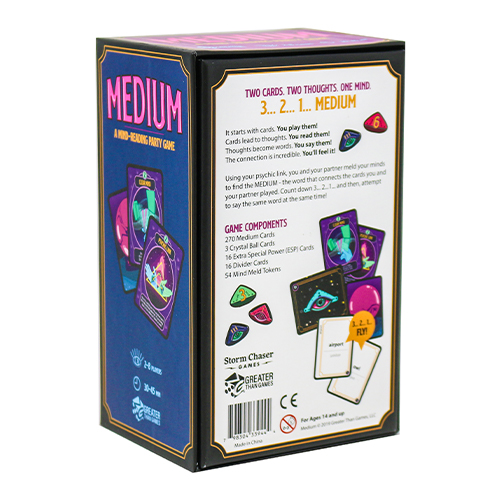 you could earn 1650 victory points

you could earn 1650 victory points

“Medium At one of the Tabletop Gaming Live conventions a game became legend among the Zatu bloggers. A game that created laughter and memories. That game was medium. Many party games play on the ‘psychic’ connect between people and Medium might just be the best one yet. Medium is a big box of words on card. They are split into various decks that are put together using some…
Read More
Category Board Games Tags Best Sellers, Girls Night In, Greater Than Games, Medium SKU ZBG-GTGMEDM-CORE Availability 3+ in stock
Share
Share this
85%

"Medium At one of the Tabletop Gaming Live conventions a game became legend among the Zatu bloggers. A game that created laughter and memories. That game was medium. Many party games play on the ‘psychic’ connect between people and Medium might just be the best one yet. Medium is a big box of words on card. They are split into various decks that are put together using some sort of lexical voodoo. Depending on the player count you will combine a certain number of decks and shuffle them together, before dealing each player six cards. Two players start and when they are done play moves on to the next pair in a clockwise fashion. It only moves one spot though so the player on the left will play next with the player to their right and it continues this way until the required amount are scored by one player of the cards run out. Each of the two players choose a word card from their hand, either randomly or not. Both players then look at the two words and try to think of a word that connects them to each other. For example if the two cards say ‘Hole’ and ‘Cake’ the connecting word could be ‘Donut’. Once both players have thought of a word they count to three and say it together. If they say the same word they score maximum points. If they say different words they play again but this time the base words are the words they said as answers. So in the example above if the players had said ‘donut’ and ‘Jam’ these would be the new words they must try to connect. If they fail again they get one more chance with the next two words they guess. It’s a clever system that more often than not creates laugh out loud moments. Whether that is peoples weird brains or watching a pair get frustrated by their inability to sync up! There is also an expansion to add even more variation! Player count: 2-8 Time: 30-45 minutes Age rating: 14+"

Party games that require silliness are always hit and miss, and so many can be reviewed with the simple sentence - 'It depends on who you play with'. Play with the cast of a pantomime and the game shines, but with shyer folk the game can hang, especially with the lack of theme they usually have. Every so often a party game transcends this one sentence review by being engaging without making people feel stupid. Just One almost manages this perfectly. When you are guessing there is a risk you will draw a blank which can be embarrassing or awkward. But generally people will understand. Unlike the time I was the spy in Spyfall and sat there trying to work out a question for ten minutes...

Medium was a surprise hit seller for Zatu at Tabletop Gaming Live this year in London, let's consult the crystal ball and see if it will break the mould...

In Medium each player is dealt six word cards. Then on your turn the player to the left will play one of their cards face up. (although we like the unofficial variant where cards are initially played face down.) Then you will play one of your cards face up too. This creates your first word pairing. When you are both ready you will count to three and then say out loud a word that links the two words on the cards.

If you both say the same word - voila! Mind meld - take some points! If, however you both say different words, then you will attempt to meld these next two words for less points. Should you fail again, you'll have one more try for even less points. To make things more difficult each time you are banned from saying any of the previous words from your cards or guesses.

The cards played read: Owl and Aeroplane. After some thought both players count to three and shout out their word 'Wings' 'Flight'. So no meld here and now these players have to uses 'wings' and 'flight' as their new words, remembering that 'owl' and 'aeroplane' are not legal guesses. Fail three times and it moves round one player for the next turn. After three crystal ball cards are drawn all players count their points with the player on the left and the player on the right and the winners will be one of the pairings around the table.

Medium is a simple idea that is incredibly well done with a couple of caveats. Firstly set up and tear down is a little fiddly. To create a smooth running game the cards are separated into smaller decks loosely (very loosely) themed together. You create your game deck by randomly drawing a number of these decks and shuffling them together and then separating them back out again after the end of the game. While great for variety this does mean that there is some book keeping the the end - especially with more players as you use more decks.

This leads to a second misdemeanour - these cards will be shuffled and handled a lot. This means that those sleevers among you will want to sleeve up and I'm not sure there's adequate box space - particularly if you add in the expansion...

Lastly with higher player counts the game can drag a little as you wait longer to be involved.

Speaking of the expansion what does it add? Well obviously more decks taking the total to the mid 20's. The other thing it adds is more special power cards. I haven't mentioned these yet because honestly - I haven't felt the need to use them! These let you do things like join a mind meld attempt in your off turn but honestly aren't really needed.

Medium is a great game because there it has worked with every group I have tried it with. The premise is simple and compelling and the 'discussions' about what was or was not a good answer are amazing.