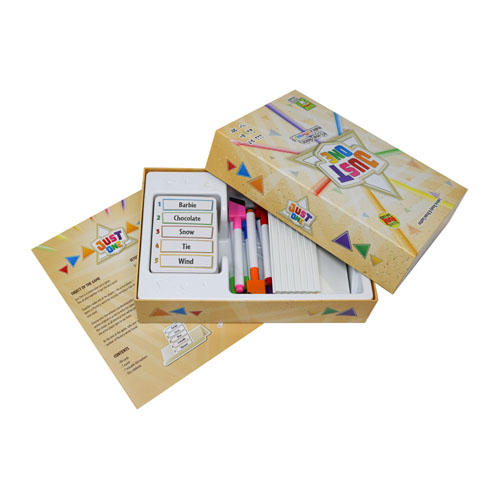 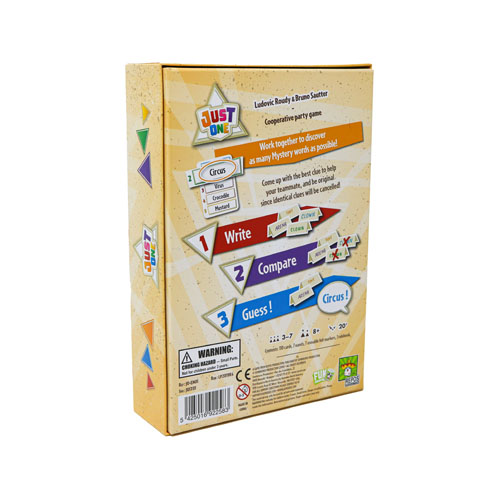 Just One is a party game that is great fun for families and game groups alike. Taking a simple premise and running with it, Just One creates moments of fun and tension as you work together to correctly identify up to 13 words. It is unusually hard to find a co-op party game, but rather than splitting you into teams as per the norm in these games, Just One has a group of up to seven …
Read More
Category Board Games Tags Asmodee, Best Sellers, Dice Tower, Fun For All the Family, Great Gifts, Pick Up and Play, Podcast Approved, Spiel des Jahres, Top 20 Party Games, Value For Money SKU ZBG-ASMJO-EN01 Availability 3+ in stock
Share
Share this
85%

Just One is a party game that is great fun for families and game groups alike. Taking a simple premise and running with it, Just One creates moments of fun and tension as you work together to correctly identify up to 13 words.

It is surprisingly hard to find a co-op party game. Rather than splitting you into teams as most party games do, Just One has a group of up to 7 players working together to score the best you can. I’ll be honest - I didn’t think this would work, but it does and it works well.

In the box, you will find a large deck of cards, seven drywipe pens of different colours, and seven white cardholders. 13 cards are dealt face-down and the starting player picks one and places it on their holder, so it is facing away from them and towards the other players.

Each card has five words on it, numbered 1-5. The player will choose one of these numbers. The other players will look at this number and then write down a one-word clue on their cardholder. Before showing these to the guessing player (who might want to close their eyes), they will check that no one else has written the same clue. If they have, neither clue will be used. The clues are then revealed to the guesser, who tries to guess the word they selected

This is repeated with different guessers for all 13 cards and the rulebook gives you a rating for how many cards you guessed correctly. Some game purists may describe this as more of an activity rather than a game, or quibble on the minimal rules, but that is to miss the point of Just One.

Just One is meant to be simply played and enjoyed with a group of friends. The co-op concept eliminates the competitive nature of a lot of games. As a result, Just One is a rewarding journey to take together and is great for showing off something of what the world of modern board games can offer.

Just One is the winner of the prestigious 2019 Spiel des Jahres award.

Party games are often held to a different level of judgement than other games. Perhaps they are not seen as serious endeavours for 'proper' gamers. I understand, really, I do. A party game getting the same score as your beloved heavy Euro is slightly unsettling. But, here's the thing - party games can tap into fun in a way that most other games can't. A good party game is not about the score, but about a shared journey with plenty of laughs along the way. Rarely will we remember who won a party game, but we will remember laughing until we cried about... something!

Just One is a co-operative party game from Repos Production. They purchased the rights from the Fun Consortium in 2018, changing the name from We Are The World. Repos made several adaptations and it's now nominated for the 2019 Spiel des Jahres. It's designed by Ludovic Roudy and Bruno Sautter.

Inside the Just One box you will find:

The gameplay is simple. You deal out 13 cards from the deck and one player takes one of these and places it on their stand facing away from them. On the card are five words helpfully numbered 1-5, the player chooses a number and everyone else looks to see what the word is. Next, they will write a one-word hint that points towards the word on the card. For example, if the word is Elephant I might write 'Ears'. The words are written directly on to the card stands, which is a nice touch.

After everyone has written a hint the guessing player closes their eyes while the other players check their words against each other. If any have written the same word all examples of the word are erased. This is the crux of the game, choosing a word that will lead to the answer but not be so obvious that everyone else chooses it. Of course, maybe everyone will be doing that, so the obvious word is the right word?

There are the usual word game rules in effect about derivatives of words and all that jazz, but Just One is best played loose and fast. Remember you are working together! The guessing player then looks at the remaining clues and attempts to guess the word.

If they are right - hurrah! One point for the team, if they are wrong they have to discard two cards. The safer option is to pass thereby only discarding the current card. Depending on the group I sometimes ignore this slightly 'gamery' rule in favour of just losing one card when you pass. The rulebook provides a ranking depending on how many of the 13 cards you successfully identified!

You could argue there is not much 'game' here. However, I have found this to be a hit in multiple groups due to the approachability, and fun. Thinking you have nailed a great clue only to have someone else come up with the same word is as amusing as it is frustrating. It is also quite unique to have a party game that plays like a cooperative experience, and it works to create a great experience.

Final Thoughts on Just One

It is hard not to recommend Just One. It's a cheap fun, party game with just the right amount of that something special. Of course, if you aren't a fan of party games already then you won't find anything here to convince you otherwise.

Bottom Line - 'Just One provides a simple word guessing game in a clever co-op package that will have you playing just one more time for most of the night!'

Editors note: This Board Gaming Guide was originally published on July 18th, 2019. Updated on April 21st, 2021 to improve the information available.