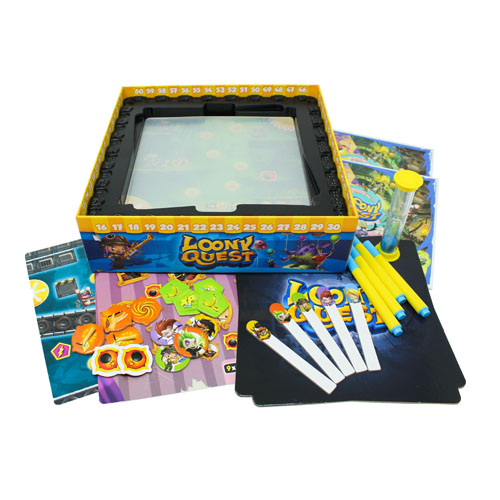 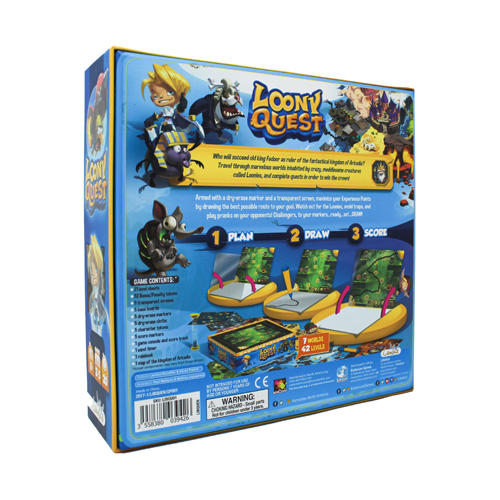 Pay in 3 interest-free payments on eligible purchases. Learn more
Success! We will let you know when this product is available again.
Your email address has been unsubscribed!
Your email address has been unsubscribed!
Notify me when this product is available to purchase!
This email address is already subscribed to this product!
Loony Quest is a drawing game from Libellud, where players try to meet the challenges of a set of world cards in order to obtain gold. Each world is represented on a card that might contain obstacles, enemies and gold, as well as a special objective to earn bonuses. Each player has a transparent sheet and a dry erase marker and by looking at the world in the centre of the table, th…
Read More
Category Board Games Tags 6-8 Years, 9+, Dice Tower, Golden Pear, Libellud SKU ZBG-LIBQUML4 Availability Out of stock
Share
Share this
80%

Loony Quest is a drawing game from Libellud, where players try to meet the challenges of a set of world cards in order to obtain gold.

Each world is represented on a card that might contain obstacles, enemies and gold, as well as a special objective to earn bonuses. Each player has a transparent sheet and a dry erase marker and by looking at the world in the centre of the table, they will draw a single line to show a route through the obstacles. When the timer runs out, players take turns to overlay their transparent sheet on the world map and see what points they’ve gained or what traps have befallen them!

To add some extra chaos to the game, bonus tokens act as attacks that you can make on other players. If someone’s too far in the lead you might want to make them draw with their opposite hand or maybe you can add an extra obstacle to their board.

Loony Quest is set in the colourful land of Arkadia, full of zany creatures and crazy traps. It might look like a kids game, but don’t be fooled – Loony Quest works for kids families and adults, and the drawing and spatial aspects can be a great leveller for all different age groups.

There are a huge number of maps, set in seven different worlds, in the box, so it’s unlikely that you’ll ever practice so hard that you become a master of the game, but if you do then there’s always The Lost City Expansion which adds extra maps and mechanisms.

Grab a pen and your greatest spatial perception skills and enjoy some fun with Loony Quest!

There are some fictional worlds where the build up to adventure is slow. A dash of colour here, a touch of darkness there, a sense of foreboding feeding into a slowly building tension that eventually erupts into an exhilarating ride as we follow our heroes into battles against the forces of darkness, against the elements, against each other and ultimately, inevitably, against themselves…

…and then there is Loony Quest.

After a brief paragraph explaining the Kingdom of Arkadia's succession issues, we are off on an ever more complex series of adventures. Battling against the elements, each other and indeed, ourselves, armed with nought but a dry erase marker pen and piece of transparent plastic.

Loony Quest, designed by Laurent Escoffier and David Franck and published by Libellud, is a 2-5 player real time, dexterity game.

Players view a series of up to six pictures or “levels” and draw on their personal plastic sheet a route through the various hazards to the objective for each level. Once a level is completed, the plastic is overlain on the picture and points scored based on how successfully or otherwise the route has been drawn. The winner is the player with the highest score after all levels have been completed.

Completing each level requires drawing lines, circles and dots, in, through and around busy landscapes stuffed with rocket propelled penguins, sharp toothed tribal teddy bears and spiked rocks using your own sense of spatial awareness and hand-eye co-ordination as guides.

Add to that the time pressure of an egg timer counting down, the increasing difficulty of each successive level, the hazards, bonuses and penalties…

If your marker pen strays off the path and into one of the many obstacles you will lose points, for sure, however, you may also pick up bonuses and penalties. Bonuses that help you mainly by hindering others; penalties that increase your challenge.

Your spatial awareness and hand-eye co-ordination are up to the challenge – well, why not try again? Only this time close one eye, keep your arm locked rigid with the pen held between your thumb and little finger. Oh, and if you could just balance a token on top of the pen while you draw…

It’s this mix of self-inflicted penalties and playful 'take that' that provides the highlight of a game of Loony Quest. They turn a reasonably challenging solo activity into a very funny exercise in group silliness.

Platform based video games are a clear inspiration for Loony Quest. There are 42 levels, grouped into seven “worlds”. Each level in each world is more challenging than the last, building up to a boss-level of sorts. The worlds are also progressively difficult with the later worlds substantially more taxing than earlier ones. Some levels have hidden ‘Easter Egg’s’ that allow access to special bonus stages. This is a very nice feature, if you can find them.

The components are generally excellent with colourful and amusing art. The box cleverly acts as both a display unit for each level and as a scoring track. The only component related niggle being that the transparent plastic sheets do start to smudge and become difficult to clean over time.

A surprising number of rules oversee what does and doesn’t count as a line, dot or circle. The rulebook clearly describes these. However, the best way to play is with a very relaxed approach; playing to the spirit of the rules rather than to the letter.

The artistic among you will have an advantage over the less artistic. In fact, one particularly artistic person in my group no longer plays as she wins so often. Me, while I will happily play, I am a bit fed up of losing to the children. Every. Single. Game.

For the less artistic, it is frustratingly easy to end every level with negative points. Particularly if, like me, your dots, lines and circles invariably suggest you are impersonating an inebriated earthworm crawling on an ink pad.

At around 20-25 minutes to complete a “world”, Loony Quest doesn’t outstay its welcome and is well suited to non-gamers and children. Whether you would play two games consecutively is debatable. Although the levels are nicely varied, each is essentially a variation on a theme and prone to repetitiveness despite the large number of levels.

Loony Quest works well with both families and groups of adults. It's a game for kids wanting to gang up on their parents and those after a quick filler at the end of an evening of heavy strategy. It may not see regular table time, however, the time it does see will be fast, fun and light-hearted - a good giggle at Christmas rather than a family game night staple.