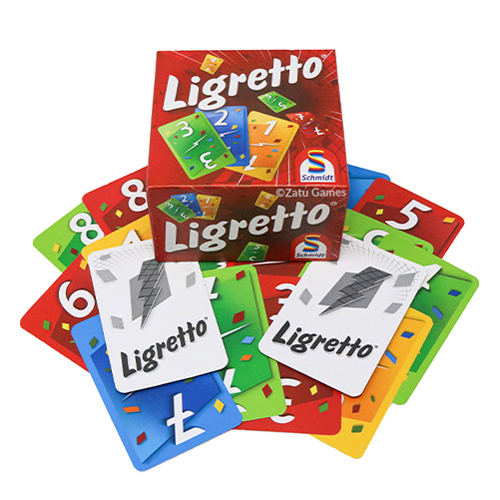 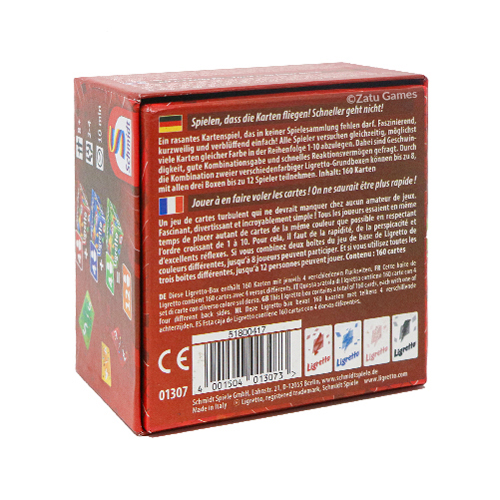 you could earn 779 victory points

you could earn 779 victory points

Ligretto Red, from the German company Schmidt Spiele, is a fast-paced, action-packed, easy to learn solitaire style card game. 2-4 players aim to be the first to clear out their ligretto stack. The box comes with four packs of 40 cards, each pack contains four colour suits numbered 1-10. Players deal their ligretto stack of 10 cards face up onto the table and then between 3-5 cards …
Read More
Category Board Games Tag CoiledSpring SKU TCS-1307 Availability 3+ in stock
Share
Share this
80%

Ligretto Red, from the German company Schmidt Spiele, is a fast-paced, action-packed, easy to learn solitaire style card game. 2-4 players aim to be the first to clear out their ligretto stack. The box comes with four packs of 40 cards, each pack contains four colour suits numbered 1-10. Players deal their ligretto stack of 10 cards face up onto the table and then between 3-5 cards (depending on player count) face up into their row. The rest of the cards make up their hand.
Once ready to play, the round starts by someone shouting ligretto. The race to clear out the ligretto stack starts. Players create shared piles of cards from 1-10 in the centre of the table in any of the four coloured suits. Players can play cards from their row, the top of the ligretto stack or dealt from their hand, in sets of three. The game is frenetic as players play their cards simultaneously. As cards are discarded from their row, players restock from their ligretto stack. If at any point in play, players cannot play a card they can shuffle their hand.
The round continues with new piles being started as players play any one card. Players need to pay attention to all cards being played and Ligretto requires fast reactions to get your cards out before your opponent. This is what makes the game so much fun as the game changes so quickly and it is almost impossible to keep up. This causes hearts to beat faster and many laughs and done healthy competition.
The round ends as soon as one player's ligretto stack is emptied and the player shouts "ligretto stop!". Players score one point for each card played from their deck and subtract two points for each card left in their ligretto stack. The winner is the player who achieves the highest although you may choose to play a set number of rounds or first to a specific score.
Ligretto Red is a fast, exciting and fun party game. It is easy to learn, quick and with no down time, is very family friendly. The red box allows for four players but add the green or blue box to increase the player count to eight or even 12. Suggested age range is 8+ but younger players could pick this up easily.
Player Count: 2-4
Time: 10 Minutes
Age: 8+

Ligretto is a family and party game that could be playable for up to 12 people. It is a fast-paced card-laying game that is suitable for all ages. Each player has their own set of 40 cards, of four colours numbered one to 10. Each deck is recognised by its own distinctive symbol on the reverse side; pyramids, cubes, crystals and spheres.

The Aim of the Game

The aim in Ligretto is to place as many of your own cards in sequence into the middle of the table. Cards are laid in numerical order. Play continues at the same time with each player frantically building on the cards that have been laid and to lose all of their cards from their deck. A deck is divided into three sets; a stack of 10, a row (of three to five cards depending on player number) and the remaining cards in the hand.

The stack of cards is placed face-down with the top card and number revealed. The row of three (or more) cards are laid face-up alongside the stack. The game commences with a shout of “Ligretto!” Starting with a number “1”, all players place cards in the middle of the table. Simultaneously, players build piles in the middle. Cards may be played from the stack, the row or the hand. Cards in the hand are examined in groups of three, in a style akin to patience.

As cards are placed from the row, this will leave spaces to allow players to move cards off their stack. It is possible to build on cards within a player's “row”. However, these cards must be in descending order and sequential cards must be of a different colour.

The round ends when one player has emptied their stack and shouts “Ligretto!” All the cards played in the middle of the table are sorted by their symbol. Individual player’s cards are counted and added to their tally. Players who have non-played cards lose two points for each card still in their “stack”. The game finishes after an agreed number of rounds or when the first player reaches and agreed score.

Ligretto is a fast and frantic game. Players who play quickly will do well. This game is all about playing your hand as fast as possible. Sometimes you might have chance to glance at other's cards. As they play their cards this can open the possibility of moving cards from your deck - but only if you beat others to the play. This can bring some sharp words and argument about who played a card first so house rules might be needed for clarity.

A typical round can be finished in three or four minutes, so a Ligretto game could be completed in 20 minutes depending on the agreed goals. If you are fortunate to clear your stack quickly it often will pay to call “Ligretto” immediately in the hope that others will lose double points for their remaining cards. An alternative tactic could be to continue to play cards into the middle to rack up as many scoring points as possible, in order to achieve a target score.

Ligretto is a super family game. Young children will find the colour matching and number sequencing easy to follow. With time the children will get quite quick and certainly give the adults a run for their money.

A box of Ligretto contains enough cards for four players. Schmidt Games have produced three different boxes (coloured red, blue and green). Each Ligretto deck has a unique back. Therefore, with three boxes, up to 12 people can play simultaneously.

Ligretto is a fun way to play games. There is no “down time”. As things become more competitive, or with large numbers of players, inevitably players will stand and jostle for position to access the played cards in the middle of the table. This is a card game that can almost become physical. In many ways - the more the merrier, and certainly the louder.

Ligretto can be played by two or three. However, due to limited options of cards in the stack, row or hand this can make gameplay more sedate. Whilst playing Ligretto there is a pressure and tension to get cards played as quickly as possible. At the end of each round (especially in larger groups) there can be some frustration. Inevitably you will notice places where cards could have been laid and you have missed it. The need to get the stack emptied, the fear of double negative points and the frenetic simultaneous play ensures players feel under pressure to do well.

A few boxes of Ligretto, played at any party, can break the ice. It is a great leveller. You do not need to be smart or clever, only observant and quick. It is the sort of game that all ages would love especially at family gathering.

Be warned, in playing Ligretto sibling rivalry can come to the fore and the older generation are often out-witted by the younger ones. Although a single box plays well with four, it is not really enough to bring the frantic pressure to bear. This game is best with six or more players and therefore two or three boxes of different colours are best purchased.