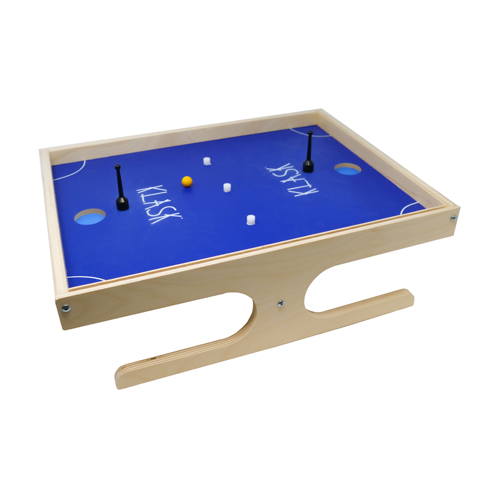 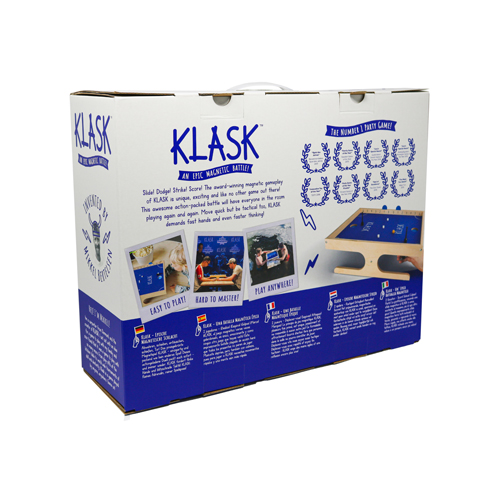 you could earn 5329 victory points

you could earn 5329 victory points

KLASK is a magnetic dexterity game from Mikkel Bertelsen. Air hockey meets ping pong in this tabletop test of skill and control. Fun for all ages, KLASK is easy to learn and fast to play. It will keep you coming back for more. The magic of KLASK is in the magnets. Each player slides their hand under their half of the raised playing surface and holds on to a large magnet. This magnet…
Read More
Category Board Games Tags Best Sellers, Competo, Fun For All the Family, Fun for Kids, Klask, Pick Up and Play, Podcast Approved, Zatu Platinum Award SKU ZBG-KL01 Availability 3+ in stock
Share
Share this
95%

KLASK is a magnetic dexterity game from Mikkel Bertelsen. Air hockey meets ping pong in this tabletop test of skill and control. Fun for all ages, KLASK is easy to learn and fast to play. It will keep you coming back for more.

The magic of KLASK is in the magnets. Each player slides their hand under their half of the raised playing surface and holds on to a large magnet. This magnet sticks to a smaller, upright magnet on the top of the board that the players will use to move the small ball around. At each end of the board is a goal hole. In between the two players there are three small, magnetic obstacles that can move around.

The aim of the game is to be the first to score five points. These points can be scored in four different ways:

Every time a point is scored, the player who conceded it will restart the game from the designated corner of the game board.

And that’s all there is to it! KLASK falls into a long tradition of tabletop dexterity games that have been inspired by sports. Unlike some others, it isn’t too bulky. The beautifully made wooden set can be set up on just about any playing surface, as long as both players can comfortably place their hand below the board.

KLASK can be enjoyed by just about anyone. The rules are simple and intuitive - they can be grasped by anyone, from primary school children right through to your grandparents. Anyone who has played a game of air hockey will be familiar with the pace and flow of the game. Start challenging your friends and family and pick up KLASK today!

KLASK is an award-winning mix between Table Football and Air Hockey for two people that fits on a tabletop. It takes seconds to learn, minutes to play but will have you hooked for hours and returning time and time again!

The box for KLASK may be big but inside you’ll discover only a few things. The beautifully crafted wooden KLASK playing board, a folded A4 sheet of paper rulebook (like I said… seconds to learn), and a cloth bag containing two (very) strong magnetic strikers, three small white cylinder magnets (with a fourth spare) and two yellow balls (again one is a spare).

Checkout my unboxing video below for a closer look at these components:

Created by carpenter Mikkel Bertelsen, from Denmark, this is a highly competitive two-player head-to-head that always draws a crowd. By controlling one’s magnetic striker under the playing board, players have to be the first to get to six points by hitting the ball into their opponent's goal.

However, points are also award for mistakes made, like falling into your own goal, picking up two or more white magnets or losing control of your striker and letting it fall over, will all give those crucial points needed to your opponent.

KLASK is very fun and very frantic with a good balance of skill in hitting the ball into the goal and defending your own. It’s so satisfying when you shoot the ball into one of the white magnets causing it fly into your opponents side or even better, flicking it on to them. It’s equally frustrating when you fall into your goal or lose control totally of your striker when going for the ball too quickly.

This is a game for all ages from young players of eight all the way to… well whenever! And for all stages of gamer. I’ve played with newbies and not and all have enjoyed playing and wanted to get a copy for themselves.

You can play this game sat at a table or laid on the floor, inside or out, and after playing it you can understand why this works well in tournaments and leagues around the world. I for one will be introducing it to many more people and playing it over and over again without it growing boring or tiresome.

Now to find a team and league to join. I’m hooked.