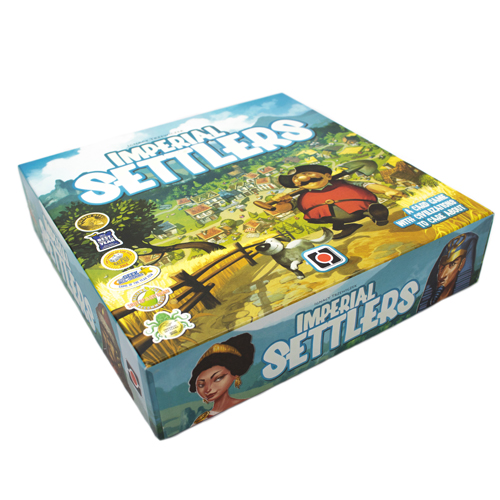 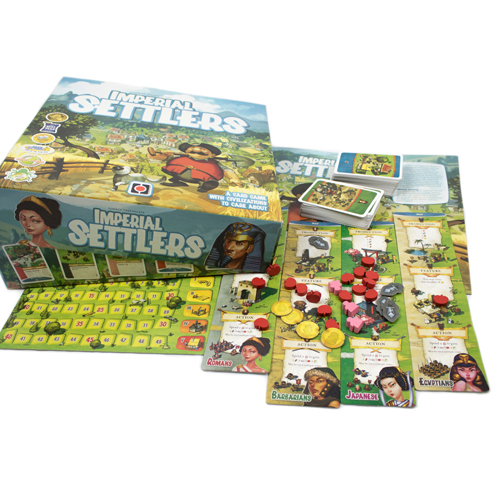 you could earn 2779 victory points

you could earn 2779 victory points

In Imperial Settlers, four factions look out beyond the border of their lands to an uncharted new realm rich in opportunity. Each of them begins to expand their empire, however, it soon becomes clear that this new land is not going to be big enough for all of them. Designed by Ignacy Trzewiczek and published by Portal Games, Imperial Settlers is a 1–4 player, empire creating, engi…
Read More
Category Board Games Tags BGG Golden Geek, Imperial Settlers, Portal Games SKU ZBG-POG001 Availability 3 in stock
Share this
90%

In Imperial Settlers, four factions look out beyond the border of their lands to an uncharted new realm rich in opportunity. Each of them begins to expand their empire, however, it soon becomes clear that this new land is not going to be big enough for all of them.

Taking place over the course of five rounds, players will lead one of the Barbarian, Egyptian, Japanese and Roman factions in their quest for empire. Over the course of the game players will see a tableau of faction specific cards and shared ‘common’ cards grow from their player board as the empire expands.

The factions themselves are unique, each with their own play style. The barbarians are aggressive, the Japanese value trade, the Egyptians have plentiful gold and the Romans are builders extraordinaire.

Using a single action per turn, players will gather resources from their empire to fund new locations, make deals, activate the special abilities of existing locations and raise an army that they use against other empires or to defend their own.

At the end of five rounds the player with the most victory points wins.

Imperial Settlers includes 120 faction specific cards (30 per faction) and 84 shared ‘Common’ cards. There are tokens representing wood, stone, food and gold. There are also 40 workers plus raze and defend tokens.

There have been several expansions released for Imperial Settlers that introduce new factions (Atlanteans, Aztecs and Amazons) and new mechanics to the base game. There has also been an official campaign variant for the solo game published by the designer via Portal Games.

Imperial Settlers, a re-implementation of 51st State by Ignacy Trzewiczek, is a perfect gateway game to introduce someone to civilisation building games, with enough meat to tempt the more seasoned players alike.

A card game with card drafting and hand management at its core, that will have you take a command of one of the four nations – Romans, Barbarians, Egyptians and Japanese – and compete for the available resources to build the most powerful empire.

Over a total number of five rounds each player will take a turn to perform any of the available actions until every player has run out of possible moves. These encompass building settlements, exchanging resources, making deals, placing workers to activate the settlements’ special abilities, and razing other players’ settlements in their empires. Despite the streamlined number of actions, the game is full of difficult choices and will have you scratch your head on more than one occasion.

On top of that, each of the four factions has its own distinctive play style and starting perks. This makes for a very fun, albeit often frustrating and mean experience where you’ll need to determine how to best manage the available resources and abilities to maximise your pool of Victory Points, ultimately determining the winner.

If the above sounds complicated, you need not worry, because Imperial Settlers revolves around a large centre piece, unique to each player, which clearly labels the starting items and possible moves, and serves as the base of the empire. It also separates all of the buildings in the empire into three categories – Production, Feature and Action – and gives you specific rows within which to lay them.

The cards themselves have text on them explaining what each place does and in the top corners it provides the cost to build it and the benefit that can be gained from razing it, respectively. Our settlements usually produce a type of resource, let us swap resources for Victory Points, provide a special action, or a combination of those.

While on the topic of resources, there are three main types. Wood and stone are the main resources with which to construct our settlements, whereas food is used to make deals. The remaining tokens include gold, raze and defence. Gold can be used as a substitute for any of the resource, while raze and defence tokens allow to attack other players’ structures with the former and protect our own against other’s attacks with the latter. And last but not least are workers which can activate the settlements’ bonuses or exchange two workers for any of the aforementioned resource or new card.

You’d be forgiven to think that this game does not provide a lot of depth or choice at the beginning of your first play through, as the first two to three rounds are a brief affair, where players do not have a lot of resources and the empires are not yet at the height of their glory. It is in rounds four and five however, where the game is lost and won, where every choice matters, where other players can ruin your meticulously conceived plans in seconds by razing the building you were just about to use, and where the engine you’ve built over the first few rounds finally gets to shine as you pull combos and climb up the Victory Points track.

Rounds four and five can often take as long as the previous rounds put together, but at the same time the game does not outstay its welcome. It can be easily played in under one hour for the experienced players and under two hours for the beginners, and the slow beginning to the game ensures that it is accessible to the latter right off the bat.

It is worth adding that Imperial Settlers scales very well, with all player counts being equally enjoyable. Naturally, the four-player game will take longer than a two-player one, but owing to the fact that players take each action in turns, it keeps them engaged and the downtime is minimal.

The game also includes alternative variants of gameplay, where the difficulty and the starting hand can be adjusted, as well as a solo variant, in which you need to finish the game with more faction locations in your empire than cards in the virtual player’s stack.

The quality of the components in Imperial Settlers is also at a very high level. The three resources and workers (pink meeples!) are made out of wood (shaped, not simply cubes) and they are a pleasure to look at – especially the apples, with their vivid red colour – and are clear to distinguish between. The cards and the remaining cardboard pieces are also sturdy and colourful, and are greatly complimented by the text on the cards, alongside a well written rule book, with a further explanation of the faction specific cards and abilities in an FAQ section.

The main treat however, is the graphics on the cards, which are full of intricate details and funny stories, which are not immediately visible at first sight. Look closely and you will see the titular settlers going about their business, Roman soldier occasionally tripping, or Barbarian warriors setting a trap for the unsuspecting passersby.

The art also serves a functional role. The roads leading to our settlements, for example, serve as a clever hint as to the type of place they are depicting – so that the settlements in the bottom row will have roads only go up, roads on the top row only go down, and if you see a card with roads going in both directions you’ll know that it needs to go in the middle row.

Furthermore, each of the faction decks has a unique art related to the nation it represents, so that the land of the Egyptians mainly features deserts, whereas the Japanese faction cards are full of blossoming cherry trees. Clearly a lot of work and thought went into their creation, giving Imperial Settlers a unique, tongue in cheek art style.

Nevertheless, the art may not be to everyone’s liking. The colourful, childish drawings can easily be mistaken for a kids’ game and may deter some of the older players away. At the same time, despite its suggested age of 10+ Imperial Settlers can be really mean and the number of available options towards the end of the game may prove difficult to grasp for the younger players.

Moreover, the swords, shields and gold coins are made out of cardboard, and one would only wish they were the same high quality wooden pieces like the rest of the resources. None of the above criticisms detract from the gameplay however, or the enjoyment from playing the game and are strictly personal preference.

As far as the gameplay goes, there is a certain amount of luck involved when drawing cards. Although the card drafting phase at the beginning of each round greatly helps to reduce it, there is a chance that players may prematurely run out of options if they don’t have any production locations, and have to pass early in their turn until the next round. Yet, this happens extremely rarely and can be countered by making deals or razing settlements.

Imperial Settlers has to be commended on the simplicity and clarity of the gameplay, compared to the depth and challenge it offers. This is a must have for any new board gamers, as well as anyone looking for a fun, yet stimulating strategy game that can be wrapped up in under an hour.

The theme, the art and the mechanics of the game tie together very well and form an elegant game that may not necessarily be the main dish, but it is one juicy and delicious starter!