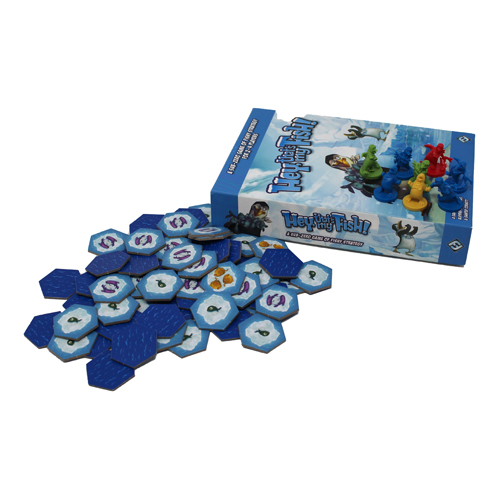 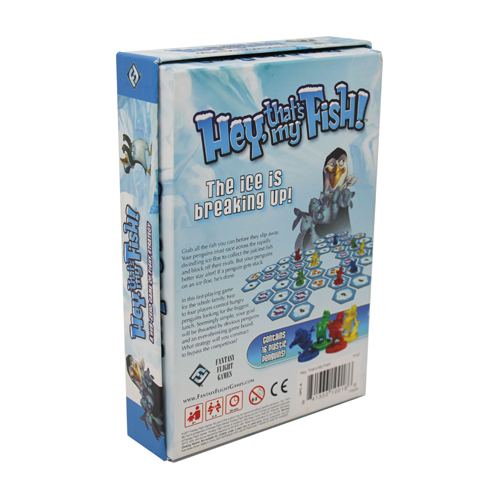 In Hey, That?s My Fish!, players want to catch as many fish as possible with their waddle of penguins. Each turn, a player moves one penguin in a straight line over hex-shaped ice tiles with 1, 2 or 3 fish on them. The player then collects the hex from where the penguin started its movement from the table, thereby creating a gap which penguins can?t cross on future turns. When a pen…
Read More
Category Board Games Tag Fantasy Flight Games SKU ZBG-FFGTY07 Availability 3+ in stock
Share
Share this
85%

In Hey Thats My Fish, each player takes control of a family of hungry penguins out to catch some fish. Each turn, players will move their penguins in a straight line over hex-shaped ice tiles with 1, 2 or 3 fish on them. The hex they finish on will be the one that they collect the next turn, but by taking that tile they are also creating a gap in the ice flow that cannot be crossed! And when a penguin can't move, it's removed from play with its owner claiming the tile on which it stands. The player who collects the most fish wins.

Hey, That’s My Fish! is a game for 2-4 players from Fantasy Flight Games (FFG). Players take turns using their waddle of penguins to outmanoeuvre their opponents and catch as many fish as they can without being trapped on an ice floe!

The game is designed by Alvydas Jakeliunas and Günter Cornett, and was originally released in 2003. FFG are known for their bigger brand games such as Star Wars: X-Wing and LOTR: Journey to Middle-earth, so it’s not the kind of game you would expect them to publish.

FFG have repackaged the box and the components to be more inline with the more detailed items you would get nowadays. As a result, the penguins were upgraded from wood to plastic and the art of the tiles is bolder.

Ready to Brave the Antarctic?

To start, shuffle the hexagonal ice floe tiles face-down. Then, place them face-up in a rough square shape, alternating the rows between seven and eight until you have placed all the tiles. The top row must have seven tiles. The players must choose if they are happy with the layout. If they're not, they can choose to switch the tiles to make it more evenly distributed.

The youngest player places their penguin first. All players then proceed in a clockwise order to place their penguins one at a time. To complete the game set-up, all players penguins must be placed on an unoccupied one fish tile.

The youngest player goes first and it continues in a clockwise order. Each player’s turn consists of two actions. Firstly, the player can move any of their penguins. Secondly, they collect the ice floe tile that their penguin started movement from.

The chosen penguin can move in any of the six directions of its ice floe tile and must move in a straight line. It cannot change direction during that move, but it can move as many tiles as the player wishes. The penguin can only move to an unoccupied ice floe tile. Penguins also block other penguins, even if it is the same colour.

Once the player has moved their penguin they are then able to pick up the tile where they started their turn from and place it face-up in front of them. Once the player has taken their ice floe tile it’s the next player’s turn. See video below for a movement guide.

Players must move their penguins every turn, unless they cannot move to a tile adjacent to the ice floe tile they are currently on. If this is the case they must remove that tile and their penguin back to their collection. This penguin is now out of the game.

Hey, That's My Fish! continues until all penguins can no longer legally move or they have been removed from the board. Any remaining tiles are returned to the box.

Hey, That's My Fish! is such a simple yet elegant game to play. The rules are detailed and easy to understand. During set-up you can explain what the rules are, so that you can play in minutes! Who doesn’t want to start a game night with something that can be explained in less than a minute!

Even though it is a simple game there is still an air of strategy to it for more experienced board gamers. You do have to think ahead a few turns and hope that your opponents aren’t going for the same tile you are!

I admit that it can be a bit fiddly trying to get the ice floe tiles from the centre of the board, however it’s easy to fix if you mess it up a little whilst taking your starting tile.

The components are well made, as you would expect from FFG. The tiles and plastic penguins are of a high quality. The gameplay time depends on the number of players you have. A game can last anywhere from 5-10 minutes, so after a couple of rounds your ready to start a more medium/heavy game.

Overall, I found Hey, That’s My Fish! to be a really enjoyable and engaging gateway game. It’s a great warm up game for a board game night. I would say it’s a great game for new or experienced players of any age. However, I can see that more experienced players would probably not find this to their taste as it’s too quick and not as strategic as some may enjoy.