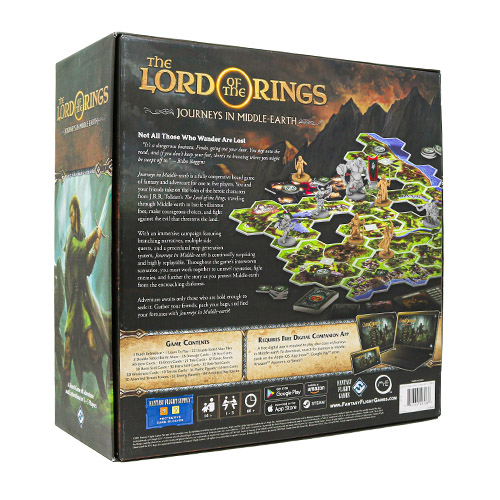 The Lord of the Rings: Journeys in Middle Earth

you could earn 7945 victory points

you could earn 7945 victory points

Embark on your own adventures in J.R.R. Tolkien’s iconic world with The Lord of the Rings: Journeys in Middle-earth, a fully co-operative, app-supported board game for one to five players! You’ll battle villainous foes, make courageous choices, and strike a blow against the evil that threatens the land – all as part of a thrilling campaign that leads you across the…
Read More
Category Board Games Tags Best Sellers, BGG Top 100, Fantasy Flight Games, Gifts Over £60, Great Gifts, Lord of the Rings, Nathan I. Hajek, Podcast Approved, The Lord of the Rings: Journeys in Middle Earth SKU ZBG-FFGJME01 Availability 3+ in stock
Share
Share this
95%

Embark on your own adventures in J.R.R. Tolkien's iconic world with The Lord of the Rings: Journeys in Middle-earth, a fully co-operative, app-supported board game for one to five players! You'll battle villainous foes, make courageous choices, and strike a blow against the evil that threatens the land - all as part of a thrilling campaign that leads you across the storied hills and dales of Middle-earth.

Each individual game of Journeys in Middle-earth is a single adventure in a larger campaign. You'll explore the vast and dynamic landscapes of Middle-earth, using your skills to survive the challenges that you encounter on these perilous quests. As you and your fellow heroes explore the wilderness and battle the dark forces arrayed against you, the game's companion app guides you to reveal the looming forests, quiet clearings, and ancient halls of Middle-earth, while also controlling the enemies you encounter. Whether you're venturing into the wild on your own or with close companions by your side, you can write your own legend in the history of Middle-earth.

Lord of the Rings: Journeys in Middle-earth aims to replicate the success of the dungeon crawler, app driven, horror game Mansions of Madness with a rather exciting LOTR theme. The game itself is app driven and much like the aforementioned game, players discover areas of the map as they journey through, in this case, Middle-earth. As this game has various aspects, I feel it suitable to break this review down into three sections, the app, the game and the miniatures (you’ll see why I want to mention these later).

One thing FFG do well is apps, specifically those that link into board games and take on the role of the “DM”. Mansions of Madness saw a well-polished, superbly themed app that drove the gameplay and freed up a player to allow all players to get involved in the investigations. The same is evident here, if not more so.

The app is beautifully designed, with every little aspect being thought of. The theme runs throughout, with atmospheric music being used to provide theme to the actual game itself, while the UI and use of the app was easy and pleasant to get along with. I would go as far to say that this app smashes the Mansions of Madness (MoM) app out the water. The MoM app is good, but this takes all the bad bits and spits them out, leaving a superb app and one that most will get on fairly easily with.

Do take this as a warning though; you CANNOT play this game without the app. If you dislike the idea of having an app run the enemy element of the game or just don’t want an app interfering with your gameplay, then this game is seriously not for you.

I will be honest; I was just like that a year ago. I did not want an electrical device dictating outcomes and running the game. MoM changed my opinion and this game, more so.

The app is so seamlessly integrated into the game itself that you sometimes forget that it is even there, or is even an app. It works incredibly well so I would say, if you are at all unsure, just take the plunge, it will be worth it. Anyway, enough about the app, let’s talk about the game!

In Lord of the Rings: Journeys in Middle-earth (designed by Nathan Hajek and Grace Holdinghaus), you will take on the role of one of the heroes from the books/films. If you have always wanted to be Gimli, now is your chance to become that angry dwarf! Each character will have a set of stats that will essentially dictate how likely they are to pass a skill check or succeed in combat. You will have various campaigns that you will play through as a “team” and more of these will be added in due course through the app. This is the advantage of having an app in this case, as it is simply a case of downloading the new campaigns and you’re ready to go!

Once you have selected your character, you will have to work as a team to explore an expanding map of tiles which are placed onto the table as dictated by the app. The app will provide you with goals and checkpoints, with a great assortment of options available. You can go hunting for treasure, hunt down some orcs or simply explore the expansive landscape.

One neat feature is when the game “zooms” into the action and players must play out battles on larger tiles that allow you to employ strategy and thought into your next moves. As mentioned previously, you will be conducting skill checks throughout the game, whether you want to cast a spell, swing an axe or attempt to solve a puzzle. Instead of rolling dice however, you will use cards to undertake these skill checks.

These cards will have symbols that you need to use to dictate wither a success or a failure. The skill number on your character card dictates how many cards you draw during a skill check; the higher the skill number, the more likely you are to succeed in the skill check. These cards are also used at the beginning of the turn, with players having the option to equip a card to their character and start using the effect detailed on the card.

While I like this feature of the cards, I am not a fan of the cards being used for skill checks. Be it that I am used to rolling dice for skill checks, or that it just seems a bit fiddly and clunky, I just don’t feel it sits right. It slows gameplay slightly and that’s my biggest complaint of this game, but perhaps the only one. I think it was the wrong move to remove the dice and replace them with cards and I don’t think I’m alone with that opinion.

That is just one small aspect though and by no means draws away from how damn awesome this Lord of the Rings game is! The way in which players use items and discover tiles is a mechanic seen in plenty of other games, but again, the theme shines through with players being able to discover the Tolkien universe and come across familiar aspects of the LOTR world.

That takes me onto the artwork of the game. IT. IS. BEAUTIFUL! You can guarantee that being an FFG game that the artwork will at least be of a pleasant standard, but this game blows me away. The artwork found across the cards, the tiles and on other elements of the game is simply stunning. So much work has gone into this game to give players a little bit of eye-candy and the artists certainly haven’t disappointed in that department.

Normally, I brush over the minis included with games, only noting them if they are atrociously bad or are the complete opposite and look fantastic. In this case however, while the miniatures are standard and look great, it’s the bases of the minis that caught my attention!

Veteran players of MoM will sympathise with me when I mention the continuous chore of organising the minis and the bases provided by the game. Unfortunately, for whatever reason still unknown to this day, it is an ongoing struggle to keep the minis served in their bases, so much so, many resort to gluing the minis in. It appears FFG have finally fixed this by providing minis that have the bases moulded to the figure, meaning gone are the days of fiddling abut trying to get a little spur of plastic into an obnoxiously small hole on a base! In my eyes, this is a massive win, so thought it noteworthy for this review.

Final Thoughts - Lord of the Rings: Journeys in Middle-earth

Either way, it is safe to say that Lord of the Rings: Journeys in Middle-earth has impressed me; with its app integration, its familiar yet upgraded gameplay and, of course, the brilliant theme! FFG have pulled out all the stops to make this game a winner, pulling off a fantastic use of their IP while creating a game that seamlessly fits into the realm of app-driven games.

I implore you to try this game, especially if you are yet to experience an app-driven experience. Many games with a companion app have been released that have stunned me in terms of their gameplay and their enjoyment, MoM and Detective to name just a couple. These games still manage to retain their board game-esque stature while providing an updated experience with the app, something Lord of the Rings: Journeys in Middle-earth also manages to pull off.

I am massively impressed with this game, the app being a standout feature, having been deigned from the ground up and integrated seamlessly with the game. Without this app, you would have a very different experience and one that I can happily say, I would not enjoy near as much.