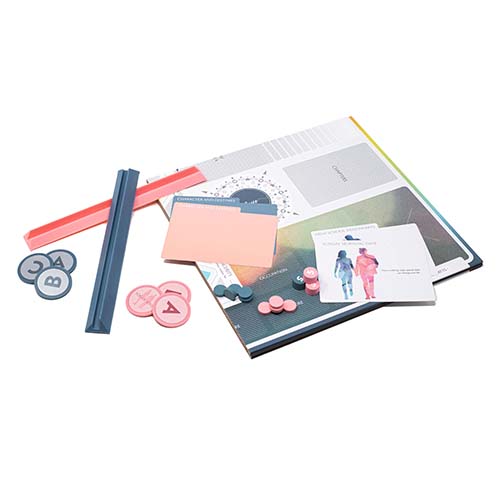 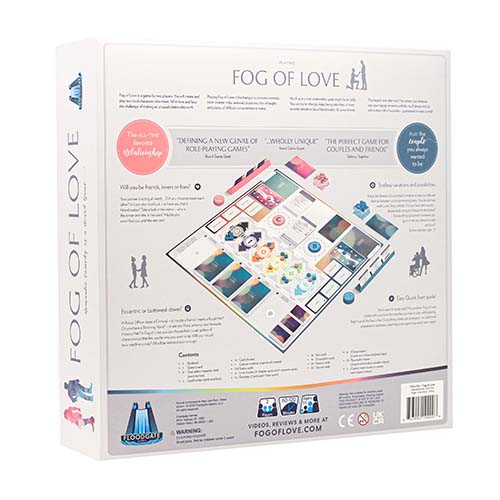 Fog of Love is a game for two players. You will create and play two vivid characters who meet, fall in love and face the challenge of making an unusual relationship work. Playing Fog of Love is like being in a romantic comedy: roller-coaster rides, awkward situations, lots of laughs and plenty of difficult compromises to make. Much as in a real relationship, goals might be at odds. …
Read More
Category Board Games Tags Best Sellers, Fog of Love, Golden Pear, Hush Hush Projects, Podcast Approved SKU ZBG-HHP0000 Availability 3+ in stock
Share
Share this
80%

Fog of Love is a game for two players. You will create and play two vivid characters who meet, fall in love and face the challenge of making an unusual relationship work.

Playing Fog of Love is like being in a romantic comedy: roller-coaster rides, awkward situations, lots of laughs and plenty of difficult compromises to make.

Much as in a real relationship, goals might be at odds. You can try to change, keep being relentless or even secretly decide to be a Heartbreaker. It's your choice.

The happily ever after won't be certain, but whatever way your zigzag romance unfolds, you'll always end up with a story full of surprises guaranteed to raise a smile!

Fog of Love casts two players as two halves of a couple, living out a romantic comedy through a series of short snippets or scenes within their lives. When you first meet you will know very little about each other, but over the course of the game, the way you each deal with different situations will start to give you insights into each other’s personality, until ultimately you decide if you should stay together or break up.

Fog of Love, was a Kickstarter campaign, designed by one man for his wife, with the goal of designing a board game his wife would actually like to play. His wife, who did some of the art and graphic design for the game, explains that she loves romantic comedies, so that was the theme that Jacob Jaskov chose.

Since the Kickstarter, the design of the game has improved massively and the final production is a beautiful game, with a similar stark white style to T.I.M.E Stories. The base game contains an introductory scenario and three further scenarios, and expansions are planned to provide more content.

Fog of Love is a semi-co-operative game which straddles the blurry line between board game and role-playing game. Before you start playing a game of Fog of Love you have to create your characters. You each choose a gender, then three trait objectives, these can be individual, or group goals, but you can't tell your partner what they are.

Next you decide upon your job, and then you choose three features about your partner that you noticed upon first meeting them. These are typically things like “muscular” or “tattoos.” Finally, you invent a name for your character and role-play a brief introduction to each other.

Once your characters are created, you are ready to start the game. There are several different stories to choose from, each consisting of a number of chapters. A chapter card gives you a quick event to play, but also dictates how many events will occur in this chapter and what event deck you should be drawing from. After you have resolved the chapter event you take turns playing cards from your hand, most of which are events in their own right, though some are secrets, reactions and other more advanced cards.

Most events will have one or both players decide on one of up to four actions. This is done by placing one of your four poker chips down and then flipping them to reveal the choice you took. The event card will then dictate the effect of the chosen actions.

Almost all of the events either affect “love” or “traits.” Traits each come in opposing pairs, for example introverted and extroverted. At the end of the game what you care about is the balance, if you had four tokens on extroverted, but two on introverted then your final score would be two extroverted. Compare your total with your trait goals and see if you achieved them, if you did then you'll gain some additional love, but failure is penalised too!

Love is tracked individually for each player; it's possible to be head over heels in love with someone who barely tolerates your existence. In fact, depending on the objective you aimed for this might be a win condition for both players!

At the end of the game each player will be committed to an end objective, these may be complementary, allowing you both to win together. Though it's quite possible that even then only one, or neither of you managed to reach your goal. As you get further into the game new objectives are added which can make the game competitive, though you don't know if your partner is going for these objectives or not!

Fog of Love is a fascinating game. It's extremely well produced and a very novel idea, but it does leave you questioning what you just played. There are definitely going to be people who hate this game for the role-playing aspect of it. If you go into Fog of Love simply trying to win at all costs then your characters will act schizophrenic, which can actually make the game harder to play as your partner doesn't have any idea how you will reach to an event.

I can also see some people simply not wanting to play a game about role-playing a relationship with someone across the table. That can be awkward, especially if there is unrequited love involved between people in real life! However for friends who are comfortable enough with each other, or for gaming couples, Fog of Love is a very enjoyable experience and a truly unique game.

Fog of Love actually introduced a very interesting concept to board gaming, we are used to very clear co-op games or competitive games. We are even used to games which have, or merely have the potential to have traitors. Fog of Love is well named, because it's far less clear than other games, you might be trying to work cooperatively, but then accidentally have ruined your partner's plan. Even when you try your best to be helpful sometimes things don't work out quite as well as you imagined and that... is actually a very good feeling to get from a game about love!

Fog of Love is unlike any other game I’ve played. Categorising it as a game, an RPG experience or couple’s therapy in a box is difficult, but what I do know is that I'm enjoying playing it. I'm pretty surprised that it's enjoyable for me, because I really don't get along with role-playing games and story-telling.

I think the strength of Fog of Love is that you're playing completely as relatable people, rather than fantasy characters and you don't have to invent any situations, unless you want to elaborate on what the cards give you. It's really enjoyable to play as a couple, so long as you make sure you create characters who don't too closely reflect yourselves! I particularly enjoy trying to distil down some of the goals into the concept of 'getting away with being a horrible person' and ensuring that I select some personality traits to match.

There are certainly some drawbacks with Fog of Love. At times I find myself trying to decide whether to follow the story of the game or simply select a card because mechanically it gives me the best options to satisfy my end game goals. I also find that you very quickly start to see the same events in each game you play, so the surprise value diminishes. Each new scenario you open adds a few new cards, but not enough to overcome the frequency of repeats. For this reason, in spite of the fact that Fog of Love is definitely re-playable, I imagine that personally I'll only want to play each scenario once.

My final thought is about who I would recommend the game to. Because of its themes, Fog of Love is definitely for adults only. I think that couples are definitely the right audience, or perhaps close friends. In both categories it needs to be for people who aren't going to take themselves too seriously. It's definitely not a game for gamers who want to play something mentally challenging, it's more of a memorable experience and an interesting way to pass an evening.

Knowing all of this, I can think of lots of my friends, particularly those not heavily into the hobby, who would really get a kick out of this game and I'm hoping I can lend it to some of them whilst I wait for expansion content in 2018.