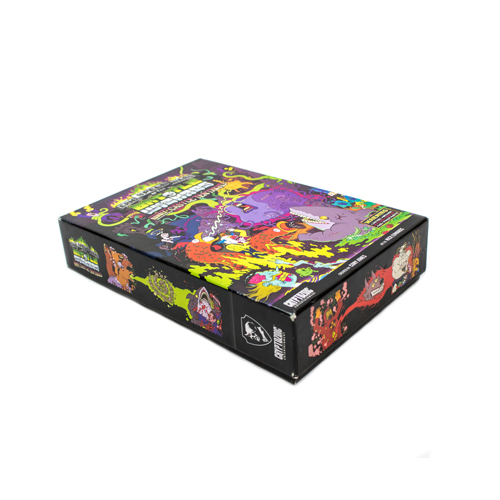 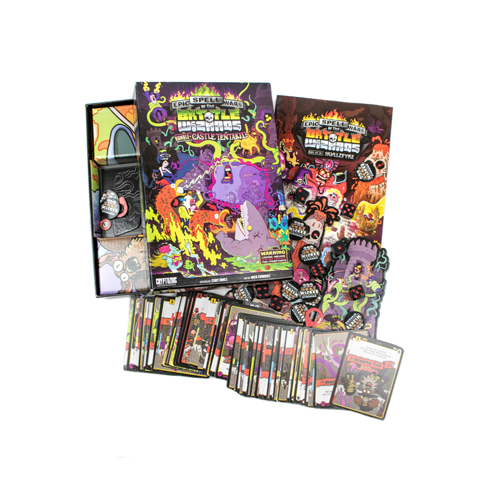 you could earn 2349 victory points

you could earn 2349 victory points

The sleeper hit has awakened! Epic Spell Wars of the Battle Wizards 2: Rumble at Castle Tentakill is finally here and it’s loaded with all-new ways to deliver a smoking death to all who oppose you. This stand-alone game is also 100% compatible with the original game, which allows players to turn an already epic game into an EPIC game. Epic Spell Wars continues its epic quest after airing on TableTop on Geek and Sundry! Featuring game design and all-new art from the original creative team of Cory Jones, Rob Heinsoo, and Nick Edwards.

New Addition: Creatures! Delivery cards in this set can also become your pets if you roll well enough. With a familiar by your side for a few rounds, you’ll be unstoppable. But if a big splash of damage is heading your way, why not have your little buddy jump in the way and take that blast instead of you?

New Addition: Blood! Collect Blood as you slay your opponents and tempt fate with powerful magiks and treasures. Use your Blood points to make some spells even more powerful than before.

New Addition: Reactions! A few spells will partially resolve even if you die too soon. Now you can play a full-strength spell without fretting about dying before it resolves. With a Reaction in there, you’ll get your revenge…

New Addition: The Standee matters! That crazy stand-up piece is now a coveted heirloom in the game. If you control it, several of your spells will increase in strength. It can also earn you some extra Blood.

Whether you have played the original or not, this new set will provide everything you need to start blasting your opponents into tiny bits of goo. Experienced players will find new challenges and they’ll marvel at the all-new Treasures and Dead Wizard cards as well. Mix the two sets together for the ultimate carnage-fest!

Epic Spell Wars of the Battle Wizards, the name should tell you everything you need to know, and it does. This game is epic. This game has wars. This game has battle wizards flinging deadly spells in attempt to melt their opponents faces off. All of these combined cause Rumble at Castle Tentakill to slowly change from a deep low growl to a full blown eruption.

When the dust settles you are hoping to be the last wizard standing. Achieve this twice and you will be the victor of this war, just in time for it all to start again.

Warning - Epic Spell Wars is not for children. This game is not even for adults with a weak constitution. Play it if you dare! 15+ age restriction.

The game, components and set-up

Once you have read the first two pages of the Epic Spell Wars rule book (these pages contain no rules) the scene is set. You are a wizard trapped in a never-ending cycle of murder and rebirth, not much has changed since the Duel at mount Skullzfyre. There is constant fighting but the addition of monsters assist in keeping some of the blood from your hands, but not in your adversaries' bodies.

This Epic Spell Wars game consists of the following components:

These components do not make it very clear what the the object of the game is, which is to blast your opponents into tiny bits, or large flaming bits, or just a puddle of goo. The end state of your opponents do not matter, only that there is an end. Once you have caused enough ends to be the last wizard standing, you receive a Last Wizard Standing token, receive two of these and you will be crowned the victor.

To set-up up this Epic Spell Wars game, combine and shuffle all of the spell cards into a single large deck, and shuffle the Treasure and Dead Wizard cards into their own decks. Each player chooses a Hero Card, which are used to keep track of life (HP) and blood (Special Resource). Place the blood counter to one side of the hero card, and the life counter at 20. Place the standee with the decks cards, which should be in reach of all players.

At the start of each round, players draw up to eight cards from the main deck (this happens each round, unused cards from previous round stay in your hand). Once you have your cards you will need to identify the types of cards that make up your spell:

Each spell has a maximum of three components, but can contain fewer if the required components were not drawn. The more components, the more flare, death and destruction you will have. Spells are always source, then quality then delivery, but cannot contain more than one type of component.

Playing a spell is completed by placing the components of the spell face down in front of you. Reveal and announce your spell. Use your best epic wizard voice and read from your spell (or memorize for better dramatic effect), Source then Quality then Delivery. Define house rules for any wizard that fails to announce the spell before starting to resolving it.

Resolve the spell by completing the actions indicated on each component, starting with Source then Quality then Delivery. Each spell component has a magic type, represented by a word and glyph on each card. These types are as follows:

Power rolls are performed by counting the number of elements that match the deliver component of the spell, matching the same type is usually better. Blood markers are a special resource gained for completing certain actions and can be spent when a card allows you to do so.

Wild magic cards can be added to replace components of a spell that you might not have and, upon announcing, the spell cards are drawn from the main deck until a matching component is located, then added to the spell. Only read the name of your spell once wild magic has been resolved.

Treasures are gained for various interactions on the cards and can be used as each treasure card indicates.

Armed with all of this information you are ready unleash your fury and wrath upon you foes! Bathe in the blood of all who oppose you!

Epic Spell Wars is a fun game that initially feels a little bit rule-heavy. As you gain an understanding of the general game flow it becomes significantly more fun and you can start to appreciate the flavour of the game. You will feel like a five-year-old with your hand in the cookie jar, as if you are doing something wrong, but the result feels fantastic.

This is always a great start to a game evening, some fun without too much thinking. If time is limited, quick match variants can reduce the time required to complete games, and additional house rules can increase or reduce the time it takes to play.

The cards are excellent quality but some of the additional components feel a like they could be improved.