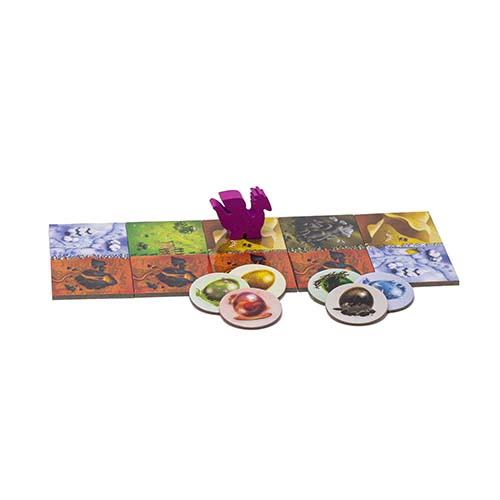 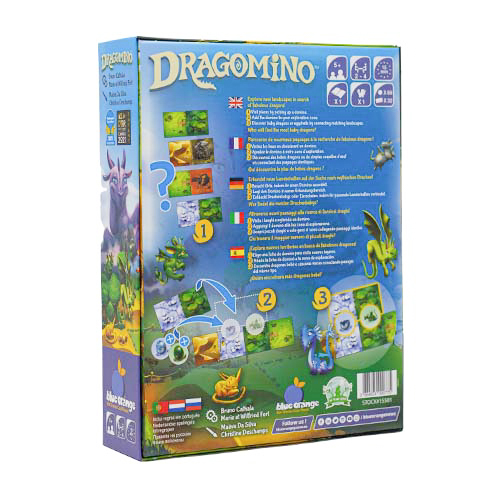 you could earn 1429 victory points

you could earn 1429 victory points

Dragomino? You might think that sounds like dragons and Dominoes… and hey! You’d be right! No doubt you’ve heard of Kingdomino, the smash hit from designer Bruno Cathala and Blue Orange Games. That particular portmanteau saw you building a kingdom out of domino-esque tiles. Due to it’s supreme popularity, Kingdomino has spawned a number of sequels and expansions. Dragomino i…
Read More
Category Board Games Tags Blue Orange, Family, Party, Spiel des Jahres SKU TCS-DRAGOMINO Availability 3+ in stock
Share
Share this
80%

Dragomino? You might think that sounds like dragons and Dominoes… and hey! You’d be right! No doubt you’ve heard of Kingdomino, the smash hit from designer Bruno Cathala and Blue Orange Games. That particular portmanteau saw you building a kingdom out of domino-esque tiles. Due to it’s supreme popularity, Kingdomino has spawned a number of sequels and expansions. Dragomino is part of the family, but it is a standalone game. You don’t need Kingdomino to play this.

Dragomino is a game for children, leaning on the core basics of what you get in Kingdomino. There’s a bunch of different 2x1 rectangular tiles, consisting of two squares. Each square is a terrain, like ice or sand, and so on. Unlike regular Dominoes, some terrains are less common than others. Everyone starts with a single terrain tile: one half snow, one half desert.

As many tiles as there are players get revealed, face-up. (There’s no numbers on the tilebacks, like in Kingdomino. This is a simplified version, targeted at kids aged five and up.) In turn order, players draft a tile and place it adjacent into their array of tiles. Every time two tile edges touch, with the same terrain, they get to take a corresponding dragon egg chit. You flip it over and see: it’ll either be a baby dragon (awww!) or a cracked shell (hashtag: sadface). There’s seven dragons available per egg type. And, since some eggs are rarer than others (equivalent to the terrain type), there’s a subtle lesson at play here…

That’s right: Dragomino teaches kids about probability! The aim of the game is, as you might have guessed, to collect the most dragons. It’s wrapped up in a cute theme, with charming artwork and quality components. Blue Orange and Bruno Cathala have another winner on their hands, here.

Dragomino is a game by Bruno Cathala and Marie & Wilfried Fort, published by Blue Orange Games. It is in the same line as Kingdomino, and Queendomino. It plays 2-4 players and takes around 15-20 minutes per game.

We have 2 girls, 3 and 6. They are big fans of simple games such as Dobble, Animal Upon Animal and Dragon's Breath from HABA. We've played Kingdomino with the eldest, and the youngest has made maps with the tiles. I'd hoped that Dragomino would provide a game we could play with both kids.

In this review, I'll cover the basic mechanism, the components, and the game. From the perspective of both children and adults.

Laying Both Tiles And Eggs

Like its predecessors, Dragomino's core mechanic is one of drafting tiles from a selection and placing them into your own kingdom. Unlike its predecessors, where the order is determined by the number of tiles, there are no numbers here. The tiles are made up of two areas which can be 6 different terrains or colours. You place 4 of these in the middle of the table and take turns drafting these tiles and placing them against your start tile. There are no limitations to placing these tiles, and your area can be any shape you want it to be. Around these tiles, you place 6 piles of different coloured dragon egg tokens. When placing a tile in your kingdom, if any of the colours match a previously placed adjacent tile, you take an egg token of the same colour and place it on the join. These tokens are then turned over. They can reveal a dragon, which is worth a point at the end of the game. Or, a broken egg. Which gives that player the first pick in the next round. The winner is the person with the most dragons at the end of the game, with the first player token counting as a dragon for this purpose.

The Dragons Are Sooo Cute!

The youngest daughter really enjoyed Dragomino. She was free to place her tiles as she wished, and she really liked collecting the dragons. Each one has different artwork and style based on their colour. This encouraged her to practice her colour matching skills.

She grasped the rules quickly. And, due to the randomness of the egg tokens, she had a good chance of winning each game.

Likely To Be Her Favourite Game

The trick that Dragomino pulls is that each colour has the same number of dragons, but different numbers of tokens for each colour. This means that she can determine the likelihood that a certain colour will give her a dragon or an egg, and this helps her with both her arithmetic and a useful start to understanding probability. This means that she could have a skill advantage over her sister, but the randomness evens the game out.

She prefers the game over Kingdomino currently, as there isn't the pressure to solve the spatial puzzle, and she also really like the dragons, especially the green ones!

One negative with drafting games is sometimes one of the children will not get the tile they want, which can result in some sad faces, and at worst a tantrum. This is a good lesson to learn but can be a tough pill to swallow.

Is This A Game For Adults?

This game does not offer the drafting challenge or spatial challenge of its predecessors and has a larger element of luck, which is a great balancing factor for playing with kids.

For an adult-only game, I would say this is a good one for the beginning or the end of a night, where you want something that doesn't involve that much brainpower, but still gives an interesting, fun, and quick game. However, I would recommend that Kingdomino gives you a better game, which is fine as we are not the target audience here.

The components in this game are of great quality and will survive contact with the unruliest of children. The cardboard is chunky and robust, and the dragon meeple is a big hit with the girls.

The insert allows for all the tiles to be stored in their piles, and for the tiles to be drafted from the box. This makes setup easy but labelling the slots for the different colours would have been useful for tear down.

Even if the kids don't want to play the game, the activity of making a giant tilemap is still fun and allows them to use their imagination.

I'm so glad we have this game. It's one that I've found I can play with both girls at the same time, which is difficult when one can read, and one can't. We also have a 1-year-old boy, who I hope will be able to join us in a few years time, as Dragomino will still appeal to the eldest.

Dragomino is not a game I would recommend if you don't have children. I would recommend Kingdomino instead, as it removes the luck factor of the egg tokens, and gives a more interesting spatial puzzle, whilst still being light. It's still an enjoyable game though, and if you do get a chance it is worth the time.

It's worth saying that Dragomino did win the Kinderspeil des Jahres 2021 and is a worthy winner. It has captured the imagination of our children and is a big hit. I would recommend this to anyone with pre-school and above children.