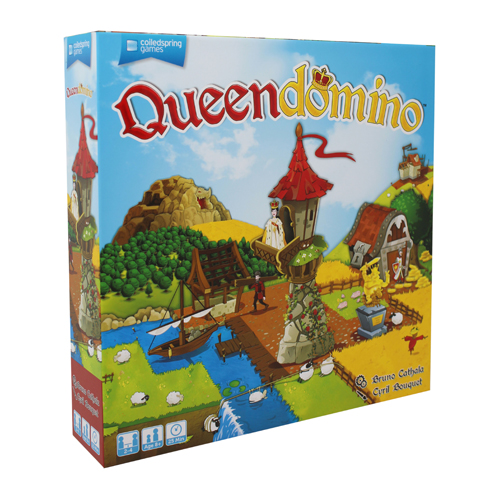 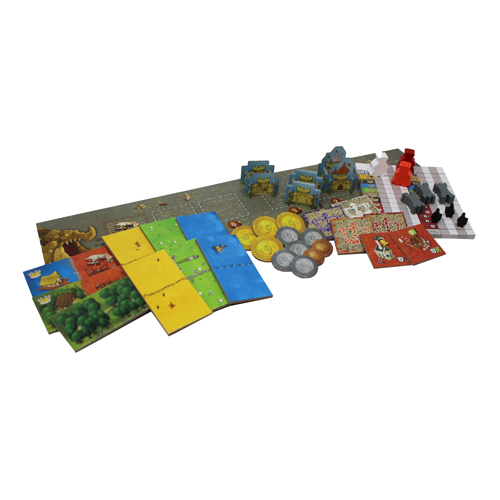 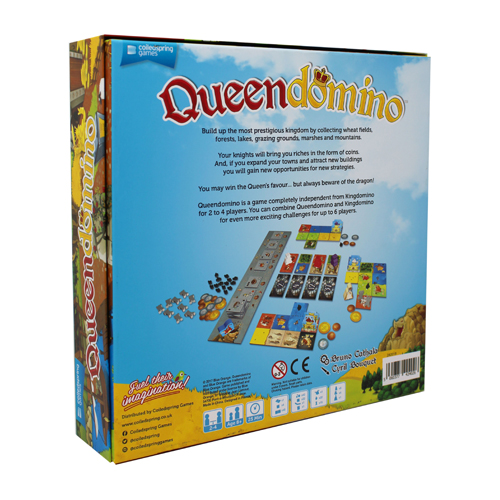 Add to Wishlist
Build up the most prestigious kingdom by claiming wheat fields, forests, lakes, grazing grounds, marshes, and mountains. Your knights will bring you riches in the form of coins — and if you make sure to expand the towns on your lands, you will make new buildings appear, giving you opportunities for new strategies. You may win the Queen’s favors … but always be aware of…
Read More
Category Board Games Tags Blue Orange, Bruno Cathala, Dice Tower, Gold, Kingdomino SKU ZBG-CS1002 Availability 5+ in stock
Share this
85%

Queendomino is a game completely independent from Kingdomino, while offering a choice of more complex challenges. Two to four players can play Queendomino independently, but also in connection with Kingdomino, allowing for games with 7x7 grids for four players, or for up to six players if you stick to 5x5 grids. Build up the most prestigious kingdom by claiming wheat fields, forests, lakes, grazing grounds, marshes, and mountains. Your knights will bring you riches in the form of coins — and if you make sure to expand the towns on your lands, you will make new buildings appear, giving you opportunities for new strategies. You may win the Queen's favours ... but always be aware of the dragon!

2016 saw the release of Kingdomino, a critically acclaimed title from Bruno Cathala, published by Blue Orange Games, that went on to be nominated for – and win – the coveted ‘Spiel des Jahres - 2017’.  The game saw players selecting dominoes to place in their ‘kingdom’ in a 5x5/7x7 grid, with the aim to score points based on the size of each territory, multiplied by the number of crowns depicted on them.

Kingdomino is seen as a gateway/filler game, perfect for families and younger children (and those newer to the modern board-gaming hobby), which can be played in as little as 15-20 minutes.  Those of us that tend to stray towards heavier titles may opt to skip this, which could be one of the main driving forces behind the subsequent release of Queendomino.

From the outset, it is obvious that there is plenty more going on in this version of the game. I say version, as it keeps the general scoring elements from its predecessor, and adds a whole other level of strategy, and dare I say it, complexity. Not to say this is a game that will be difficult for younger folk to grasp, but it certainly ups the ante.

There are a number of fundamental changes to the player actions in Queendomino. Turns/Actions now follow the following order:

This plays out exactly the same as the original game. Dominoes can be orientated in any way the player wishes, however at least one of the two territory squares on the newly acquired domino must touch & match with whichever tile is being placed next to. The player castle acts as a ‘wild’ square, meaning any territory can touch this, but doesn’t count for end-game scoring.

Dependent on the number of players/modules players choose to adopt, dominoes must also stay within a 5x5/7x7 square (dependent on player count), and can never be placed outside of this.  Should a player be forced to do so, then the domino must be discarded.

Players can then opt to place a Knight that they have in their supply onto one of the sides of the newly placed tile. That player then counts the size of the territory he has placed the knight into (e.g. forest territory that is five squares in size) and collects that amount in coins. Should they so wish, they may then place a second Knight on the second half of the newly placed domino.

Each player begins with a Knight, and further Knights can be gained through the purchasing of building.  Speaking of which…

One of the new territories on the various dominoes are the Construction Sites, these are orangey-brown in colour, and easily distinguishable from the others (farm, lake, forest etc). These in themselves do not score anything until a building is purchased and constructed on top of these.

On their turn, a player may purchase one of the six available buildings from the new Building Board, which cost between zero and five coins. Once purchased, the building tile is flipped and placed on one of that players open Construction sites; either on a tile placed that round, or one from previous. Only one building can be purchased by a player in any given round.

Building tiles provide both initial bonuses, from Knights to Towers (more on those later), and end game scoring bonuses such as points per separate territory of a given type, or number of Knights that player controls. These bonuses can provide big scoring options, and shouldn’t be overlooked.

So what of the towers I previously mentioned? Well, whoever has the majority of towers in their kingdom receives the Queen Meeple. The Queen has two effects: Firstly, she makes all buildings one coin cheaper to purchase, and secondly acts as an extra Crown when scoring your ‘best’ territory at the end of the game. Should anybody on their turn gain towers, that would put them equal to the player that currently has the Queen visiting their Kingdom, then they win her favour. 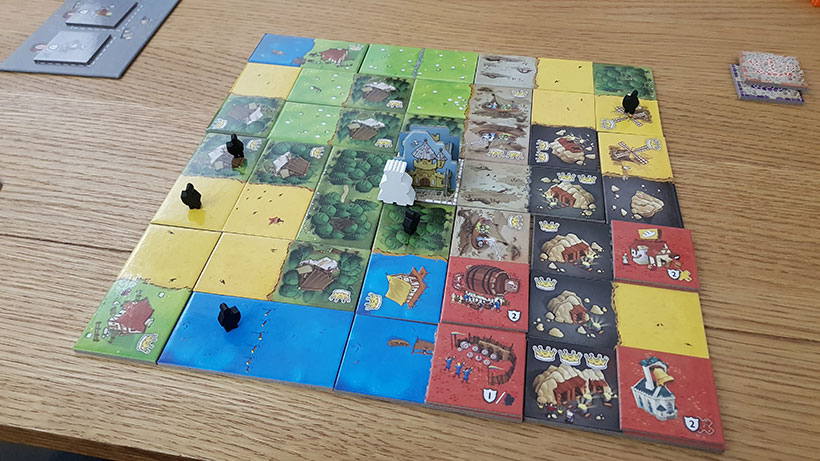 One player per round may take advantage of Bribing the Dragon. This action costs one coin and removes one of the five available buildings from the line. This is a good way to prevent opponents from getting their hands-on buildings that may score them a lot of bonus points, or simply to help siphon through the stack.

As in Kingdomino, the active player will then place their meeple onto the tile that they will use next round, thus potentially altering the player order.

Once all players have taken the above actions on their turn, in the order in-which they had selected dominoes for that particular round, a quick clean-up phase is actioned before the start of the new round. Firstly, the next four dominoes are taken from the stack and placed face-down in ascending number order, then flipped to reveal their territory sides. Then, buildings are moved down to fill any gaps vacated by purchased buildings, thus making them cheaper, and new buildings are drawn to replace the remaining empty spaces.

The game continues until all dominoes have been placed (or discarded). Final scores are counted based on size of contiguous matching territory squares x crowns depicted on them, plus any building bonuses, and for every three coins left in their supply. Final bonus points are also awarded for anyone that has completed their Kingdom with their starting castle tile in the middle, and they are awarded for managing to finish their Kingdom without having to discard any dominoes.

Queendomino is a standalone game. Some may prefer to stick to the original, or purchase this title separately if they are looking for something a little meatier. Where it shines in my opinion is that they can be combined to form a mega-game of sorts. Both domino stacks are shuffled separately, with the first four dominoes being taken from the Queendomino stack.

The next round of four is then taken from the Kingdomino stack, repeating back-and-forth until both stacks are used. This allows players to play up to 7x7 sized Kingdoms (3-4 players). There are also variants for group play.

Should you go out and buy this? If you enjoy tile placement games such as Carcassonne, then I would say yes, you can’t go far wrong with Queendomino. If you have played and enjoyed Kingdomino, you should definitely look to add this to your collection, mainly for the new scoring opportunities this brings - Think of it as ‘Kingdomino-Plus’.

I do get the feeling however that it has strayed a little too far away from being considered 'family friendly’. I haven’t attempted to play this with younger children, my 11-year-old niece really enjoyed it, but I get the feeling children below the ages of six or seven may struggle a little with the added complexities it brings.

In all, Queendomino is a marvellous game, at a decent price point.