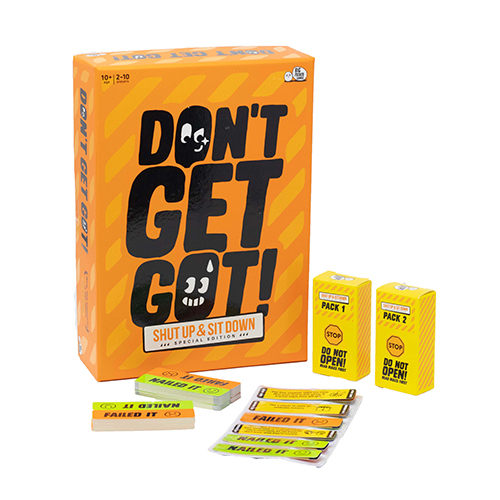 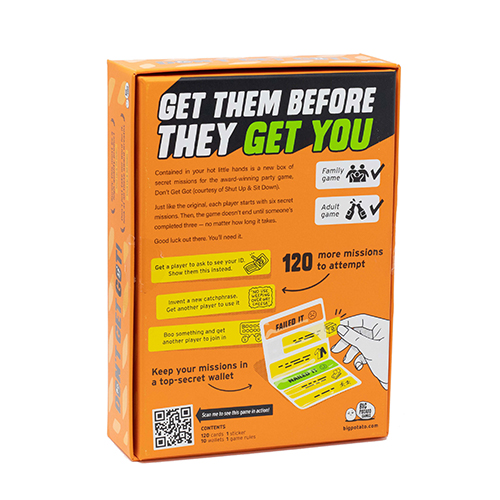 Don’t Get Got!: Shut Up & Sit Down Special Edition

Don’t Get Got! is a party game in which each player receives six secret missions. The first player to complete three of these missions wins. You don’t sit at a table to complete missions, though. This game is designed to run in the background of whatever else you have going on, which means you can play it anywhere at home, on holiday, in the office, or yes, at a party. M…
Read More
Category Board Games Tags Big Potato, Zatu Platinum Award SKU ZBP-DGGSUSD01UK Availability 3+ in stock
Share
Share this
95%

Don't Get Got! is a party game in which each player receives six secret missions. The first player to complete three of these missions wins.
You don't sit at a table to complete missions, though. This game is designed to run in the background of whatever else you have going on, which means you can play it anywhere at home, on holiday, in the office, or yes, at a party.

Also included in this Shut Up & Sit Down Special Edition are 10 plastic wallets and 1 collectible sticker.
If you already own Don't Get Got, this box will work as a very generous expansion, doubling the amount of missions in the base game and letting you play with up to 20 players.

Big Potato Games are fast becoming the rulers of the party game world, and their secret mission game Don't Get Got! has been a fan favourite since it hit the shelves in 2018. Now, Don't Get Got! is back with a brand spanking new expansion bristling with devious new challenges to catch you and your friends out. This expansion packs in 120 new missions crafted by the brainy folks over at Shut Up and Sit Down. They have even included a set of cards specifically for games nights. For veteran Don't Get Got! players, there is also a stack of Epic Missions to add some devilishly difficult challenges to your game.

The idea behind Don't Get Got! is a simple one. Everyone is given six random and unique tasks and a plastic wallet to keep them safe (it even works if it gets lost in a bin, trust me!). This edition comes with more wallets than the original, meaning ten players can now join in on the fun. To help make the game as fun as possible these can be swapped at the start if any are genuinely impossible to achieve.

These missions can range from simple, like getting a player to check the weather, to challenging, like getting a player to name three types of fish in a minute. If you get a player to do whatever is on your card, well done! They got got and you can turn that card to its 'Nailed It' side. However, if a player calls you out on your antics and asks if it is part of the game, you must turn the card to its 'Failed It' side. Not only is this frankly quite embarrassing but it also means you can't retry this mission again, so be careful.

Shut Up and Sit Down have outdone themselves with the variety of the cards on offer here. Without giving too much away, I can simply say that you should expect tasks involving everything from hand-holding to the Transformers. Given the varied nature of the missions, it's easy to forget about the game, and this is where Don't Get Got! shines. When everyone goes about their day and lets down their guard you have the perfect opportunity to strike. Don't Get Got! is at its best over longer periods of time. This does not in any way mean it's not spectacular at parties, but the longer you play the more intricate your plans can be. Having played over bank holiday I was impressed at how creative and conniving my friends could be.

Overall, this edition of Don't Get Got! is an outright winner. The missions are superb and everyone I have played with loved it. I have no doubt that this will be a bank holiday staple, and I frankly can't wait to play over Christmas and New Year. I was worried at first if people would really enjoy this, however, everyone was really throwing themselves into it. The tasks are just the right level of challenging and with almost no setup time this is perfect for almost all gatherings. Don't Get Got! can be played while pretty much anything else is going on and works best when people are doing other stuff. From an office party to a weekend away, there isn't really any setting where it doesn't work.

This is what allows the game to keep feeling fresh and exciting. You have the game in your mind, but it is never your main focus. This leads to some fantastic moments where people are got while they're doing something mundane, like washing up. These moments are the most satisfying, and I don't think I've ever played a game which has players as excited about winning. Both Big Potato and Shut Up and Sit Down should be commended as the writing and designing is just spectacular, and I can wholeheartedly recommend this game to anyone who enjoys fun.