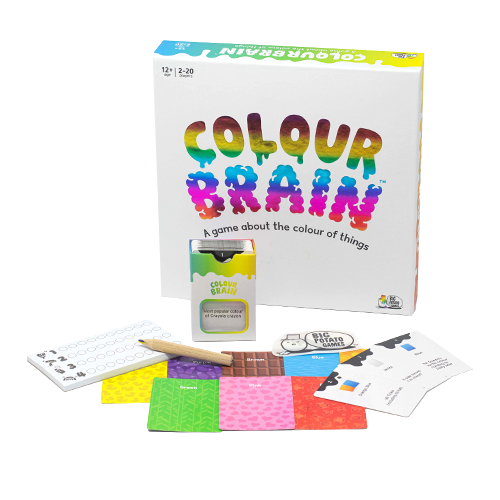 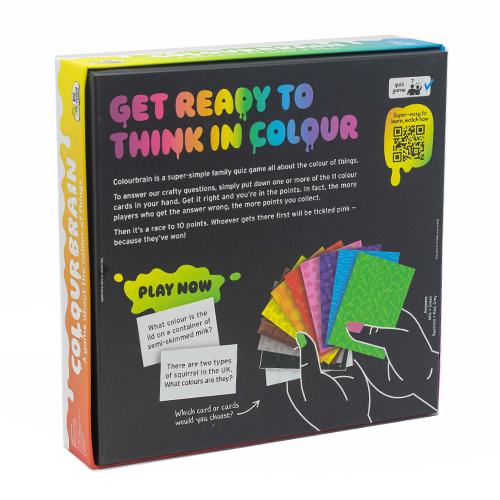 you could earn 1779 victory points

you could earn 1779 victory points

ColourbrainBig Potato Games are one of the best publishers for unique party games. Whether it is rhyming your way through puzzles in Obama Llama, wearing the tin foil hat of physic blocking in Head Hackers, or following the cow crowd in Herd Mentality, they always have a trick up their sleeves.Colourbrain aims to be the quiz for those who aren’t good at quizzes. It does this by ha…
Read More
Category Board Games Tags Best Sellers, Big Potato, Colourbrain, Pick Up and Play, Zatu Silver Award SKU ZBG-CB01 Availability 5+ in stock
Share
Share this
78%

Big Potato Games are one of the best publishers for unique party games. Whether it is rhyming your way through puzzles in Obama Llama, wearing the tin foil hat of physic blocking in Head Hackers, or following the cow crowd in Herd Mentality, they always have a trick up their sleeves.

Colourbrain aims to be the quiz for those who aren’t good at quizzes. It does this by handing you all the answer cards in the form of 11 colour cards. Helpfully these are coloured and written on so that there is no debate about what colour a card is.

A question card will be drawn and it’s your job to answer with the relevant colour cards. For example you might be asked about the colours of the power rangers and you’d answer with the correct cards. You’d also hope that some of the other players get it wrong because you score a point for each other player that gets the answer wrong!

Each player of team also gets a power card to use, when they are losing to severely limit the leading teams options and give them a chance to catch up. Because the questions are greatly varied across different themes and categories every player feels involved and has a good chance to compete.

Colourbrain can be played individually or in teams, and is perfect for those large family gatherings. It has also now seen a few themed sets released including the surprisingly challenging Disney edition! Big Potato have done it again - this one is a keeper.

Big Potato Games are building a reputation for fun games that appeal to the gamer and mass markets. Whether it's taking a known game and bringing it to a wider audience, with The Gooseberry, becoming The Chameleon, working with 'celebs' for Dan & Phil's Truth Bombs, or putting out silly but fun fun fun games like Obama Llama, Big Potato know how to give us the tools to have a good time.

In ColourBrain they turn they attention to a quiz with a difference, a quiz where you are given all the answers from the start.

Weeeeeeeeelllllllll, that's not quite true. Up to four players or teams take 11 colour cards. These cards, or the combination of them are the answers to all the questions in the box. Helpfully for colour blind players the cards are not only the colour of the answer but also have the colour written on them. They also get a random card that has a number on it.

At any point in the game you can play this card on another player or team to remove that many colour cards from their hand, as long as they are ahead of you on points.

Also in the box is a bingo pen, score pad and lots of question cards. It has to be said the card quality isn't the best and the box, although not massive, is probably bigger than it needs to be. I sometimes thing that Big Potato could do with focusing more on the basic component quality than the extras like silly pens, but it is what it is.

Playing the game is simple. A card is read out, without revealing the back of it. The question will be something as simple as 'The colour of the felt on a snooker table' which can be answered with one card, to something that takes more thought like 'The colours of Superman's suit' which takes more. Once everyone has chosen, answers are revealed. Any team that gets the answer right, scores a point for every team that got it wrong. First to 10 wins!

The questions are a good mix of 'Oh that's obvious' to 'Wait this is definitely blue... or is it green. No it's blue... it might be red,' to 'I have no clue, does it even have colours?' This means it can work as a family game as well as a game for games night.

You might be scratching your head and thinking that all sounds a bit simple. You'd be right on one level. Most of the questions are at least guessable, even with moments of doubt. The 10-point victory limit makes for a good length of game that doesn't outstay it's welcome and the whole thing is a hell of a lot of fun. It's really a case of the whole being more than the sum of it's parts, as ColourBrain simply works.

Compare ColourBrain to Linkee, one of Big Potato's first games, and you can see how far they have come in refining their products. Linkee was arguable a better quiz game, but it had a convoluted and long scoring element that meant the game lasted way too many minutes. ColourBrain leaves you wanting more, which is probably good given the quiz elements aren't as varied as in other games.

I Can See a Rainbow

If you are looking for a light, punchy quiz game with great accessibility then ColourBrain could be the game for you. Combining the experience of Big Potato with a clever gimmick really works, yes there are little niggles but for under £20 you can't go far wrong.

Nick can also be found at Board, Deck & Dice