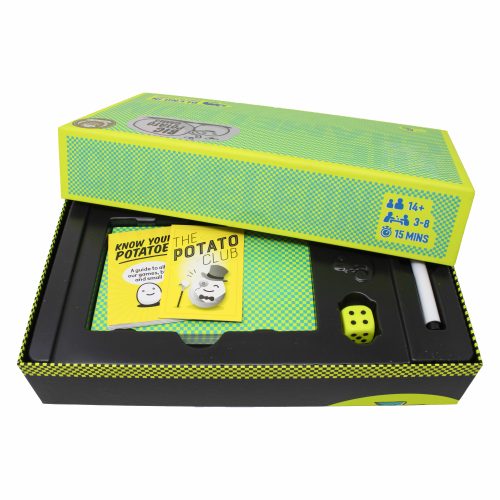 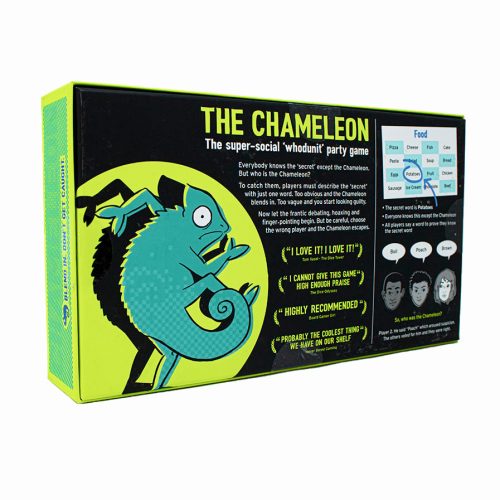 Everyone knows the secret word except the Chameleon. But who is the Chameleon? Using one carefully chosen word each, you try to catch out the imposter. But when someone is this good at blending in, innocent people start looking guilty and the Chameleon can escape scot-free.
Read More
Category Board Games Tags 6-8 Years, 9+, Best Sellers, Big Potato, Fun For All the Family, Rikki Tahta, Value For Money, Zatu Platinum Award SKU ZBG-CHA01 Availability 3+ in stock
Share
Share this
91%

The Chameleon, by Rikki Tahta and Big Potato Games, is a social deduction, word-based, family-friendly, party game in which the players have to work out who amongst them is hiding as the chameleon.
The game is a simple game of hide and seek where players each draw a card one of which will state that you are the chameleon. All other cards are identical and contain a grid of the different die roll combinations which in turn provides the co-ordinates of the word you will describe from one of the topic cards in the main game.

One player rolls the two dice and players use their grid to locate a word on the topic card being played that round. Each word is loosely linked to the topic title. Players then go round providing a one word clue to the secret word on the topic card, being careful not to use any of the words that are on the card, or the word itself.

This is difficult for the chameleon as they must blend in without knowing the specific word the team are describing. However, players cannot provide too easy a clue as otherwise they may help the chameleon to guess the hidden word. Once all players have stated their word, the team then discuss and attempt to work out who is hiding as the chameleon. This requires deduction skill and some good bluffing from the chameleon. Once deliberations are concluded, players vote. If they are correct and unmask the Chameleon, the chameleon gets the chance to guess the secret word, it successful, the Chameleon stays hidden.
It is the balance here that creates the enjoyment as players must choose their words carefully so as not to make it too easy for the chameleon, whilst the chameleon needs to choose a word that is open ended enough that they don't get caught.

There is an option to score the game with the undetected chameleon scoring two, the chameleon scores one if they're unmasked but guesses the secret word. The team score two if the find the chameleon and he/she doesn't guess the word. In this game, it's the first player to give points that wins.

This game goes down well with families and at parties. So... can you manage to blend in well enough to play as the Chameleon? Do you have the detective skills to successfully unmask the chameleon? Get the game deal our the cards and find out.
Player Count: 3-8
Time: 15 Minutes
Age: 14+

There are times when you, dear gamer, will enter a social situation where the query “anyone fancy playing a game?” will be met by the response, “Oooh, Monopoly?” Let me assure you that this response need not result in the senseless waste of human lives or a lengthy term in prison, because there is an alternative: the party game.

Okay, I realise that you are well aware of this, but I just wanted to get in another unsubtle dig at Monopoly – they’re big boys, they can take it. The thing that party games and Monopoly have in common though is that they are both very accessible - either due to familiarity or a simple rule set and a relatively quick play time (guess which one is which?) – and when it comes to party games, you can’t beat Big Potato Games.

Big Potato’s ethos is all about games that people can get into PDQ, from quizzes like Blockbuster (fantastic for film buffs) to rhyming miming games like Obama Llama. They’re silly; they’re colourful; they’re fun; but most of all, they’re for everyone.

The Chameleon is a similarly colourful, silly game which takes the classic gaming trope of hidden identity/spot the imposter and gives it a spuddy spin. As few as 3 or as many as 8 players have to describe a word on a theme sheet – only problem is that one of the player’s only way of knowing what the word is based on how the other players describe it. The object of the game for those who know the word is to unmask the imposter; for the imposter it is to blend in, chameleon like. Hence the name.

Each player is given a card which may have a code sheet on it or the phrase ‘you are the chameleon’. Whoever dealt the cards then rolls two dice, which corresponds to a set of co-ordinates on the code card which corresponds to a word or name on the theme card, which everyone can see. The themes range from famous historical figures to favourite desserts and all points between, so you can adjust your theme according to your group.

The players then take it in turns to say one word that they believe relates to the chosen word or name on the card, but here’s where they have to be careful – too vague and they will look like an imposter; too specific and they will give it away to the chameleon (of course, the chameleon will have to guess anyway).

Once everyone has said their word, everyone discusses who they think the chameleon is. If they get it wrong, the chameleon has escaped; if they get it right, they have captured the chameleon, but there is a chance for the chameleon to escape; if she can correctly deduce the chosen word or name, she wriggles out of their clutches and lives to play another day (no lives were lost during the playing of this game).

There are ways you can score this game if you want to play it over a number of rounds, but if you just want to start again… you can do that too.

A Hiding in Plain Sight

Like all Big Potato Games games, production values are very high on this – the cards are good stock and laminated, the box has a possible head-ache inducing yellow and green colour scheme, there is even a wipe clean write-your-own theme card if you want to make something a bit more bespoke (mutual friends, things you find in your living room, favourite characters from Dad’s Army, that sort of things). There are plenty of themes out of the box as well, and the method of choosing the word or name is ingenious and nearly cheat proof (there are even two sets of code cards, green and blue, so even if you do have a player with a didactic memory, it’s gonna be tricky for them to memorise two sets of code cards) and the play is fast and fairly easy to grasp.

The only real issue is that it can be a bit too fast – once the roll is made, the words are said and the discussion had then the game is essentially over; this is absolutely perfect for breaking the ice and will make a change from Coup, Resistance or Cards Against Humanity (The Chameleon is certainly more family friendly in this instance), but there is a bit more play to be had out of those, and I haven’t even mentioned a Fake Artist in New York, which has a very similar theme.

There is another issue that might be considered a cardinal sin for gamers – there is a theme card with board games and one, not one of them is a Big Potato Game and two, they are all games like snakes and ladders, ludo and yes, you guessed it, Monopoly. However, seeing as this is a game mainly aimed at new or would be gamers… ah well, if you can’t beat them, join them. Steer clear of the brown properties – they’re mine…