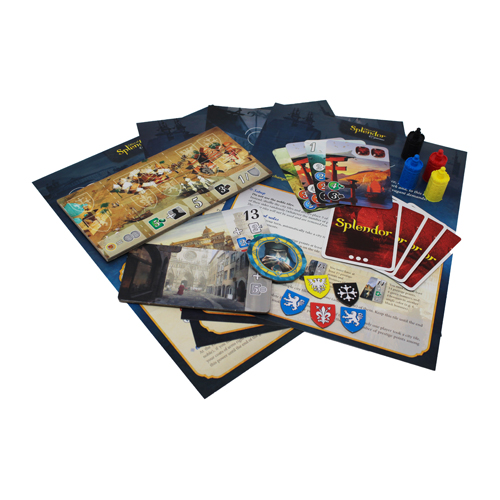 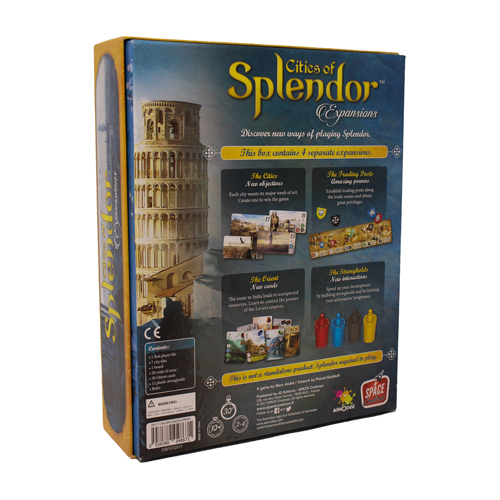 Cities of Splendor, from Space Cowboys, adds four expansion modules to the 2014 Golden Geek Board Game of the Year winner and Spiel des Jahres nominee. Splendor is a majestic family game by Marc André involving card drafting and tableau building and Cities of Splendor gives you even more variety in the way you can play. The four expansions must be played singly and offer very diffe…
Read More
Category Board Games Tags Asmodee, Splendor, Zatu Silver Award SKU ZBG-ASMSCSPL02US Availability 3+ in stock
Share
Share this
75%

Cities of Splendor, from Space Cowboys, adds four expansion modules to the 2014 Golden Geek Board Game of the Year winner and Spiel des Jahres nominee. Splendor is a majestic family game by Marc André involving card drafting and tableau building and Cities of Splendor gives you even more variety in the way you can play. The four expansions must be played singly and offer very different variants on a successful theme while not bogging the game down with any unnecessary complexity. The “Cities” expansion changes the game’s victory condition and does away with the base game’s noble tiles. Instead you will reveal three of the seven double-sided city tiles and race to be the first to achieve the printed victory condition on one of the tiles, which will include a score and a number of specific coloured cards you must have in your tableau. With “Strongholds”, each player will take three of the plastic strongholds in a specific colour and during the game when you purchase a card you will place (or move) one of your strongholds on a card that doesn’t already contain an opponent’s stronghold or remove an opponent’s stronghold. Strongholds effectively reserve cards for you and give you an extra purchase action if you manage to have all three of your strongholds on a single card. “Trading Posts” adds a new board that displays special abilities for the players to gain if they have achieved certain objectives. When you unlock an objective you place one of your coloured coat of arms markers to show you have achieved it. Watch out because these bonuses are powerful! “The Orient” expands the number of available cards, adding another deck to the side of the main deck with three levels of Orient cards that give weird and wonderful benefits such as double bonuses, the ability to reserve a noble and other cards that interact with the cards already collected in your tableau. Each of the expansion modules give a very different feel to the way Splendor is played and will keep the game fresh for years to come. Player Count: 2-4 Time: 30 Minutes Age: 10+

Most people know of, or are aware of Splendor a 2014 game from Space Cowboys. For those who have been living under a rock, go buy it today!!  Seriously, it is a great game which is easy to learn and play, but with plenty to think about.

In Splendor you are a gem dealer collecting various Gems to buy permanent Gem cards. Collect enough of the right kind of Gem cards and you might attract a visit from a local Noble. Once you exceed 15 prestige (victory points) the game ends and the player with the most points wins. Fast forward to the end of 2017 and Space Cowboys announced an expansion set for the base game.

Enter Cities of Splendor, a set of four mini-expansions for the base game.

Inside the box for Cities of Splendor are all the components that you need for all four expansions. These consist of,

This first expansion in the Cities of Splendor is suggested as the first addition to the base game. It allows for light changes to be made. In the Cities expansion you will not use Nobles cards. Instead you will use three random city tiles. There is quite an amount of variety in these cards. This is due to there being seven double-sided tiles.

Where it changes however is as soon as the first city tile is claimed that triggers the last round. At the end of the round you win if you are the only one with a City tile. If there are more than one claimed then you use prestige to break ties. So even if you are trailing in the score a judicious buying of Gem cards can sneak a victory for you.

In the Trading Post expansion each player will have a set of coats of arms. You will use the Trading post board and be able to buy a bonus that will apply until the end of the game. These bonus’ vary in strength and ability from, Gaining a free Gem token when buying a card, being able to still take three Gems when taking two of the same colour, Gold is worth two Gems instead of one or additional Prestige.

With The Orient expansion you have an extra set of 30 cards. These are divided up as three sets of 10, one for each level of the core game. You will play the game as normal. But with the Orient cards you get additional bonus’ when you buy them. This for me is the strongest of the four expansions in this game.

Level one cards might give you a single use two gold (wild) option or a bonus Gem to one you already have. Level two cards will give you cards which are worth two Gems or even reserve a Noble. Level three cards will you go for a free level two card or maybe discard one from the game to gain three prestige.

The final expansion in Cities of Splendor is the Strongholds expansion. With this expansion, each player will have three plastic Stronghold miniatures. The way these work is similar to a reserve action. You will place them onto cards in the tableau. This stops others from buying them. They can however place their stronghold onto the card to remove yours.

If you manage to get all three Strongholds onto one card you can use a second purchase action in one turn to buy that card.

Cities of Splendor - The Collection

So how do these all come together? Well they don’t. That is they are each to be played separately but not together. This feels very strange and does make you question why they were boxed together and not sold individually? While I cannot definitively say why that is, I do postulate it is a cost issue of the components in the separate expansions.

That grumble aside, each of the expansions work, and work well. The Cities can tend to shorten the game or help someone who is behind to sneak a win. The Orient can also shorten the game but adds some nice little wrinkles to the mechanics. Trading Post allows you to gain some nice game changing bonus’ as well.

All three of these add some nice elements to the core game. In my opinion (it is just my opinion), Stronghold is the weakest but it can bring a bit of take that into play as you can block a card you clearly see an opponent going for.

Overall value to you will depend on how much you play Splendor and how much you want to change-up the game. At its current price point of sub £25, which works out at approx £6.50 per expansion, I do think it does add enough “new” to the game to be worthwhile. I purchased Cities of Splendor for my own use and do not regret that decision at all.

I purchased my own copy of “Cities of Splendor” for my own use. This does not affect my review or my final thoughts on the game.