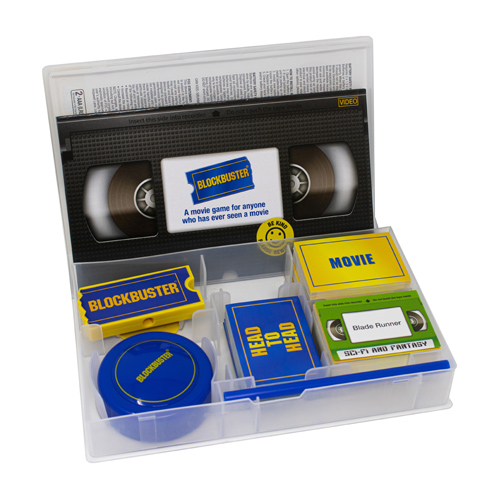 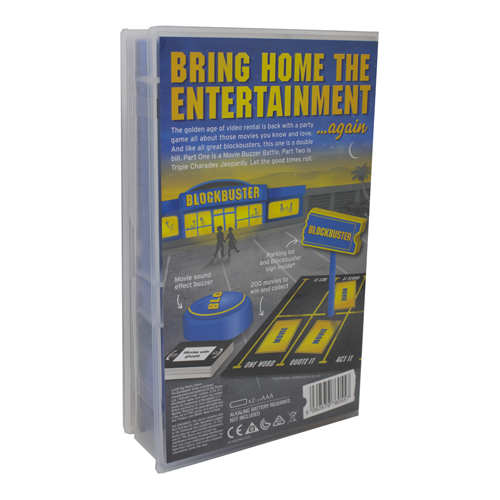 So, you think you know about movies?  Expert or not, Blockbuster: The Board Game (from Big Potato Games) delivers a host of fun and laughter to any game night! Thematically on point, you’ll find the game housed within a VHS plastic case. In Blockbuster, a movie game for anyone who has seen a movie, two teams battle it out to be the first to secure all eight movie genre cards …
Read More
Category Board Games Tags Best Sellers, Big Potato, Blockbuster Games, Fun For All the Family, Top 20 Party Games, Value For Money, Zatu Platinum Award SKU ZBP-BB01 Availability 5+ in stock
Share
Share this
90%

So, you think you know about movies?

Expert or not, Blockbuster: The Board Game (from Big Potato Games) delivers a host of fun and laughter to any game night! Thematically on point, you'll find the game housed within a VHS plastic case.

In Blockbuster, a movie game for anyone who has seen a movie, two teams battle it out to be the first to secure all eight movie genre cards and claim victory! So, how is this done?

Firstly, you need to win the Head to Head round. Here, you'll be naming as many movies as you can think of (of guessed, when mimed by your teammates) before the buzzer runs out of time. The movies you say must follow a suggested theme found on the drawn card. For example; "Movies with Cars in." This is a back and forth battle, with the 15-second timer being reset every time a correct answer is named. The player who runs out of answers, or time, loses and hands control to the other team.

With this control the player gets the pick of the six movies. They keep the three easiest and passes the hardest three to the other team. They then tactically place their movie cards face-down.

Collect as many Movie Cards in this round as you can in the 30 seconds provided. If you do a fantastic job and complete your three movies in time, you can move on to your rival's cards too. Stealing their cards will edge you closer to victory.

Continue competing in these two rounds, working through your team, until victory is yours!

Who doesn’t love a good movie night?! Who doesn’t love chatting about that said movie for nights to come?! In this new party game from Big Potato Games, talking about Movies is what it’s all about! Whether you’re a movie boff or a causal consumer of a good flick every now and then, Blockbuster is the hilariously fun game for you and your friends!

Blockbuster comes in a perfectly themed box. Yes, this game comes in a VHS case! Upon opening, you'll be greeted by a VHS cassette inspired playing board. On the gaming side, there is a car park styled board.

You will also find a Blockbuster signpost, a buzzer, 200 Movie Cards, 60 Head to Head cards and of course the obligatory Big Potato Games sticker! Take a closer look at these components in my unboxing video below.

Being a party game, Blockbuster requires you to have friends and ideally in two equal teams. A first player is selected from both teams and they step up, (well sit opposite each other) for the Head to Head!

Between them is the buzzer. A card is revealed with a random category such as “Movies with buses” and the first person to shout out their answer then hits the buzzer to start a 15-second countdown for the other player to give their answer. This goes back and forth until someone runs out of answers…

If, like me, all of your movie knowledge disappears at the sound of that buzzer ticking down, all is not lost. Your team-mates can mime out clues for you to guess which adds a whole new level of fun and laughter to the game!

The winner of the Head to Head draws six Movie Cards from the deck. They'll secretly pick the ‘easiest’ three for themselves. The other three are handed to the loser of the Head to Head, who also keeps them secret from the rest of their team. As a result, the winning team could have a huge advantage in the next stage.

Both players now decide which Movie Cards to place face-down in the corresponding parking places on the Game Board. The categories (spaces) are:

When everyone is ready the player who won the Head to Head starts. The 30-second timer is set by holding the buzzer down for three seconds. The timer begins when the horn sound is made.

If your team are wizards at guessing and you glide through your three cards with time to spare then you are allowed to steal your opponent's cards, moving through them in the same way. When the time is up the other team has their turn. All cards guessed correctly remain face-up in front of the team.

New opponents are chosen and the Head to Head and Movie round starts over again. The winning team is the first to get all eight different coloured genre cards laid out in front of them.

This game was an instant hit with our games group, the Hairy Game Lords. Even my non-gaming, not seen many films, wife got involved on the second play through and thoroughly enjoyed it!

Blockbuster shot to the top of my favourite Big Potato party games and there is certainly lots of fun to be had in the 30 minutes of gameplay. Whilst some have questioned if it has enough replay-ability, I think this game has more than other well-loved titles from Big Potato, like Obama Llama.

It’s easy to learn and easy to teach and you can be set-up and playing in 30 seconds. Even if you don’t know too many movies the game plays well as you are part of a team that can make up for lack of knowledge you may have. The Head to Head was partially fun with team mates frantically miming out suggestions in those 15 seconds. Of course, the other team are keeping a close eye on you! You may accidentally give the answer away and they'll steal the victory.

Despite having knowledge and acting prowess, it all comes down to something not related to skill. This is true of most Big Potato titles, and I like this. In the case of Blockbuster, winning is all about set collection and being the first team to get eight different coloured movie genres.

Bring this out at your next games night or party if hilarious fun is your thing…And in the meantime get binge watching movies on Netflix, even though you will probably forget everything you've the moment that buzzer begins counting down!