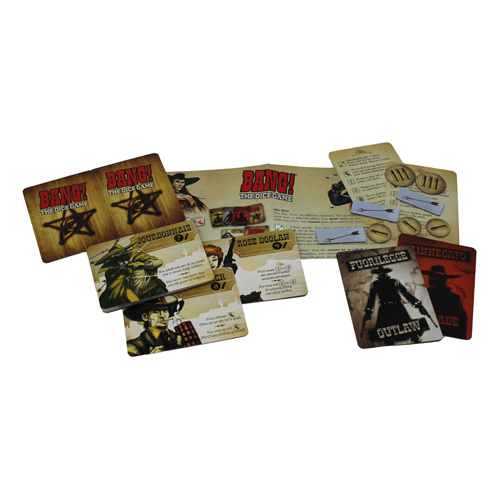 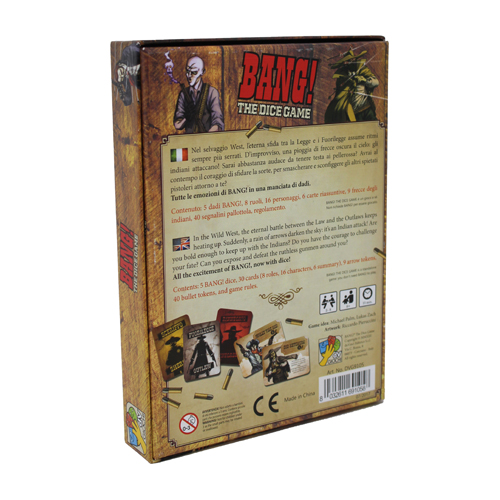 Bang! The Dice Game is a 2013 re-implementation of the Bang! Card Game from 2002. It features the same wild west shootout with a sheriff who can’t quite remember who is a loyal Deputy and who is a treacherous Outlaw. As the name suggests, this version uses dice instead of cards to see who lives and who dies. Updating the game to feature dice has worked incredibly well. Games are s…
Read More
Category Board Games Tags 9+, Bang! The Dice Game, Dice, dV Giochi, Lukas Zach, Michael Palm SKU ZBG-DVG9105 Availability 3+ in stock
Share
Share this
85%

Bang! The Dice Game is a 2013 re-implementation of the Bang! Card Game from 2002. It features the same wild west shootout with a sheriff who can’t quite remember who is a loyal Deputy and who is a treacherous Outlaw. As the name suggests, this version uses dice instead of cards to see who lives and who dies.

Updating the game to feature dice has worked incredibly well. Games are shorter, snappier, and more exciting. Players are assigned characters and secret roles. There are four roles in each game; Sheriff, Deputy, Outlaw and Renegade. The Sheriff and Deputies win if they outlive the Outlaws and Renegades. The Outlaws win if the Sheriff dies and the Renegade wins if they are the last person standing, a very tricky role to succeed in.

On their turn a player will roll the five dice up to three times. Choosing to keep certain results along the way. The dice will allow players, to inflict harm upon themselves and others, as well as heal.

When the dice allow you to shoot they give you a range of either one or two. The one lets you shoot a player next to you and the two means you have to shoot a player one space further away. This leads to players being forced into shooting those they don't necessarily want to. During the game this will lead to many heated debates and appeals to the Sheriff, whose role is always visible.

The Bang! dice can also cause Gatling Guns to fire, inflicting damage on all players. Beers rolled allow healing, which can be given to other players if necessary. There are also Native American attacks and Dynamite explosions, which can cause big amounts of damage.

Bang! The Dice Game is a fun experience. It has player elimination but the game will be over quickly and it’s fun to watch the last few rounds play out. Outlaws and Deputies can win even if they have been eliminated so still have a stake in the game.

Having the Renegade in the game nicely muddies everyone’s motivations. The Renegade will want to keep the Sheriff alive, but not too alive. So can be mistaken for a loyal Deputy, which will anger the real Deputies.

This is a worthwhile addition to the Bang! Family. It plays up to eight and is a wonderful way to kick-off a gaming night. You may end up playing it all night as everyone will want to have one more roll of the dice.

Bang! The Dice Game is a 3-8 player western style shout out between the good guys (the Sheriff and his Deputies) and the bad guys (the Outlaws and the Renegades). Throw in Indian attackers, variable players powers, dice and group of people wanting to have fun and you have Bang! The Dice Game. This game is such a fun, quick, light-hearted filler experience.

Bang! The Dice Game, by DV Giochi, keeps the some of the core elements of Bang! Each player starts off being dealt a hidden role, with the Sheriff revealing themselves at the start of the game. Players will either be the Sheriff, a Deputy, an Outlaw or a Renegade. The aim of the game is for the Sheriff and the Deputies to kill the Outlaws. The Outlaws win by killing the Sheriff and the Renegade must be the last man standing.

Players will also be dealt a character card that grants the player special abilities to be used in the game.

On a player’s turn they will roll the five dice up to three times locking in any die that they choose to keep. The dice show six different symbols which have different effects as follows;

After a player has resolved the dice in the order above then the dice are passed to the next player. Play continues this way until one of the win conditions is met. If a player loses all of their hit points they are eliminated from the game.

Thoughts from the Wild West

Bang! The Dice Game is fantastic at what it sets out to do. I have played this game at the end of a heavy game night, introduced it to family and played it during my lunch break with non-gamers. It is a fun, enjoyable and great game. The rules are simple and straightforward, so it is easy to teach. The players powers add some additional rules which are easily picked up by most people.

It is a quick game, typically lasting around 15 minutes, so although there is player elimination people don’t end up sitting around waiting too long for the game to end. After one game has finished, shuffle up the role cards and character cards and go again. Simple, clean, fun and with a small price tag. Highly recommend Bang! The Dice Game if you are after a game in this genre.