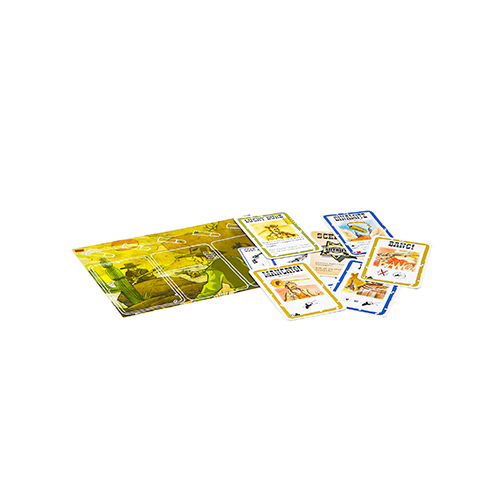 “The Outlaws hunt the Sheriff. The Sheriff hunts the Outlaws. The Renegade plots secretly, ready to take one side or the other. Bullets fly. Who among the gunmen is a Deputy, ready to sacrifice himself for the Sheriff? And who is a merciless Outlaw, willing to kill him? If you want to find out, just draw (your cards)!” The card game BANG! recreates an old-fashioned spagh…
Read More
Category Board Games Tags 9-11 Years, Bang! The Dice Game, Card Games, dV Giochi, Golden Pear SKU ZBG-DVG9100 Availability Restock Expected
Share
Share this
82%

"The Outlaws hunt the Sheriff. The Sheriff hunts the Outlaws. The Renegade plots secretly, ready to take one side or the other. Bullets fly. Who among the gunmen is a Deputy, ready to sacrifice himself for the Sheriff? And who is a merciless Outlaw, willing to kill him? If you want to find out, just draw (your cards)!"

Four different Roles are available, each with a unique victory condition:

A player's Role in BANG! is kept secret, except for the Sheriff. Character cards are placed face up on the table, and also track strength (hand limit) in addition to special ability.

There are 22 different types of cards in the draw deck. Most common is the BANG! cards, which let you shoot at another player, assuming the target is within "range" of your current gun. The target player can play a "MISSED!" card to dodge the shot. Other cards can provide temporary boosts while in play (for example, different guns to improve your firing range) and special one-time effects to help you or hinder your opponents (such as Beer to restore health, or Barrels to hide behind during a shootout).

A horse is useful for keeping your distance from unruly neighbours, while the Winchester can hit a target at range 5. The Gatling is a deadly exception where range doesn't matter: it can only be used once, but targets all other players at the table!

Information on the cards is displayed using language-independent symbols, and 7 summary/reference cards are included.

For those not familiar with Bang! The card game, it is a fast-playing card interaction game released by DV Giochi in 2002. It went on to win the Best Traditional Card Game Origins Award in 2004, as well as the Origins Award for Best Card Game Design.

Straight out of the box you get the feeling that this game is going to be simple to learn, set-up and play. Bang! for me is a quick-paced party game. Having played it with four, five and seven players, I can safely say the more the merrier. Though as the number of players increases, so to does the risk of players getting eliminated before making an impact.

The rules are brief and easy to understand, and the game includes a quick reference card for a description of all the cards and characters. It’s a good touch and probably the only part of the rule book you would return to after the first five or 10 minutes.

In Bang! The Card Game each player around the table is handed a character card, play mat and secret “role” card. The characters come with various amounts of health and different special abilities. The roles, however, are where the game thrives.

You have essentially been separated into three teams, without knowing which teams the other players fall into. Only the Sheriff is known to the full table. The Sheriff must try and work out who his deputies are around the table and work with them to kill the outlaws and the renegade. The outlaws need to try and kill the sheriff, but show your hand too soon and you’ll have the full force of the law coming down on you. The renegade wants to be the last man standing, and this card is where the game gets interesting. The renegade might try and pose as a deputy and, if played right, can leave the sheriff shooting at his own men.

To temper the crazed free-for-all, all players will start with a gun with a “range” of one, meaning you can only shoot your direct neighbours. Cards picked up through the game can upgrade this, and as players are knocked out new players will move into range. The rules also state that you can’t play the same card twice, so a player can’t shoot you four times on their first go.

You will start your turn by drawing two cards and adding them to your hand before playing as many as you want down in front of you. These cards have a wide variety of effects, but the most important is the game's namesake - a BANG! card will let you BANG! a person in range - reducing their health by one.

Your own health can be recovered by knocking back a cold beer, and a variety of other cards will help you upgrade your weapon, lock someone in jail, or dodge a BANG! played against you, amongst many other options. Each card also has a traditional card value printed on it (four of diamonds for example), and when cards are drawn these values tell you when cards in play are activated - maybe you’ll escape Jail, duck behind a barrel to shield yourself from attack, or maybe that stick of dynamite you just caught will blow up in your face.

The game moves around the table with each player selecting cards and playing them to upgrade themselves and hurt the others. With the random element of a shuffled deck and fairly small hand sizes you can never really plot more than one move ahead, but that doesn’t mean that you are left bored between your turns. A series of bluffs and pleads will continue through the game as you try and convince the sheriff you’re the good guy and the outlaws you’re one of them.

This gets progressively more entertaining as characters leave the game, and with additional forfeits for the sheriff if they kill a deputy, the sheriff has all the power but no clue. You can end with a table of people all completely sure they know who you are but being completely wrong.

Each game of Bang! lasts around 20-40 minutes and with the changeable characters/roles and the quick game length I found myself itching for another game as soon as the first one had finished. With the rules being so simple I found it a game I could describe to my friends in minutes, something that is appealing to gamers and non-gamers alike.

HOWEVER, the game can be a little cruel at times, with some characters starting with only three health if your neighbours have a varied attacking starting hand or somebody plays a “dynamite” card early you might find yourself only having one turn, if that. To add to this, in Bang! your health also dictates your hand size, which means when you’re down you’re down. For me that was frustrating but with the game being quick and interaction continuous I was never bored and was keen to play again to enact my revenge.

The game components are simple but appear to be fairly well made and after a few games I’ve had no issues with anything. My only concern is the box, which feels a bit cheap and opens easily, so the game currently sits proudly in my collection with a rubber band wrapped around it for safekeeping.

Expansions do exist for this game, adding extra players (a second renegade), or new characters. This isn’t something I’ve been drawn to yet, as the base game is so re-playable, but if my love for this game continues I may find myself grabbing a few additions.

Bang! The Card Game is a simple, fun game that is quick to learn, and has enough variation to keep it fresh!