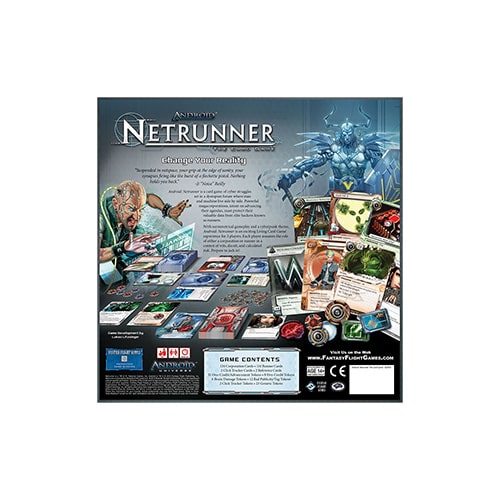 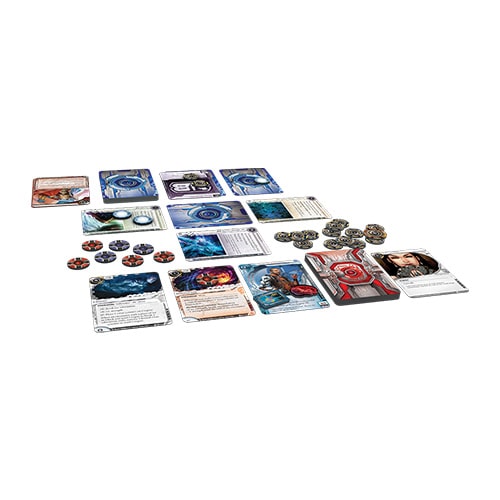 Pay in 3 interest-free payments on eligible purchases. Learn more
Success! We will let you know when this product is available again.
Your email address has been unsubscribed!
Your email address has been unsubscribed!
Notify me when this product is available to purchase!
This email address is already subscribed to this product!
Android Netrunner LCG Revised Core Set by Fantasy Flight Games is the latest in a long line of releases for the popular game but also a return to the original core set, with amendments and new additions. Netrunner is an asymmetrical two-player conflict set in Fantasy Flight Game’s own futuristic Android universe. Rogue hackers seethe their way through labyrinthine networks of …
Read More
Category Board Games Tags Android Netrunner, BGG Top 100, Fantasy Flight Games, Living Card Game SKU ZBG-FFGADN49 Availability Out of stock
Share
Share this
85%

Android Netrunner LCG Revised Core Set by Fantasy Flight Games is the latest in a long line of releases for the popular game but also a return to the original core set, with amendments and new additions. Netrunner is an asymmetrical two-player conflict set in Fantasy Flight Game's own futuristic Android universe. Rogue hackers seethe their way through labyrinthine networks of global mega corporations looking for hidden agendas to acquire. Using rudimentary equipment and also special hacking software they worm their way past security measures and traps set by the corporations. In response, the corporation player seeks to defend their precious information with any means necessary. The corporations have access to top of the line resources with an aim to stop the hackers dead in their tracks, quite literally. Bluffs and hidden information are rife with two players duelling to maintain the upper hand. The Android Netrunner LCG Revised Core Set works in two ways. For newcomers, it is a great entry point to the game with enough content to satisfy many plays purely on its own. Refinements to the original core set have led to 40 cards being removed and 59 being added, which are selected from the first few expansions. Should the new player wish to build onto their core set; there is a vast arsenal of expansions available. For the existing player, this release brings in the long awaited action of ‘Rotation’ to the card base. Retired cards that are no longer valid in a competitive tournament scene have been removed and replaced. Artwork has been remixed with an updated style and the characters have been aged to show progression over the years the game has been on the market. The Android Netrunner LCG Revised Core Set comes with everything you need to start hacking into the world of tomorrow, containing hundreds of cards, four mega corporations, three different hacker factions and all the tokens needed. Player Count: 2 Time: 45 Minutes Age: 14+

Android: Netruuner is Fantasy Flight Games' ode to these two masterpieces of science fiction: Do Androids Dream of Electric Sheep by the brilliant Philip K. Dick and the film Blade Runner (Ridley Scott), and the game lives up to that standard.

It is not directly licensed but the stamp and feel of the rich worlds created by Dick, and later by Scott respectively, are found on each and every card in this game. This game is a two-player, deck building, hand management all out competitive assault, and what's more, it is a Living Card Game (LCG) - which means it is continually growing, changing and adding to the meta.

One player will take on the role of a hacker (Runner), and the other will be one of the mammoth mega-corporations (Corps) that more or less rule the world.

Android: Netrunner is about as asymmetrical a game as you are likely to ever find, with both roles having slightly different rules and completely different abilities. Yet when learning and mastering Netrunner, it is important to have a full understanding of how each side plays and works. Imperative in fact.

On their turn, each player has a number of actions (Clicks) to use in various ways which include drawing additional cards, gaining credits or playing one of many types of cards. Over the course of the game the Runner will build-up an arsenal of programmes, hardware etc. while the Corp will be trying advance and protect their Agendas and Assets.

Android: Netrunner hinges on the intangible, the mysterious and all important Agendas. These represent highly valuable sets of data, which need to be Advanced for the Corp to utilise and score them. For the Runner, these are the target of their Runs (hacks). These highly valuable Agendas naturally need defending, for which the Corps use software known as Ice, and the Runners need Ice-Breakers to well, break or otherwise circumvent the effects of Ice.

Throughout the game the Runner will attempt to make runs against the Corporation. When successful they can claim Agendas for themselves (thus scoring) or can discard (Trash) cards if they are unable to steal them.  This is where the action of the game lies, as the Runner will need to be able to bypass the Installed and activated (Rezzed) Ice, of which there are different types, with differing strengths and abilities.

The Runner needs exactly the right one for each piece of Ice - or lots and lots of brute strength.  Failure to break and Ice's Subroutines can result in anything from Ending the Run to causing Brain Damage.  Yup, Brain Damage - complete with little brain tokens.

Android: Netrunner is very, very competitive, although to point that out may seem odd since in the vast majority of games players compete, but in Netrunner the joy of the game comes from that conflict and the frustration of being bested. And the game is full of these moments.

As a Runner this game does capture the essence of hacking, I guess, all I know about hacking I learnt from the films like Matrix, Swordfish, and Hackers. Committing a Run is a puzzle to be solved, it's about having the right tools, and the right know how to pick that particular Icy lock.  There is a great sense of apprehension about uncovering a new piece of Ice, and to discover that you went through all of that to find a poxy booby-trapped Asset, that you've gained Tags and maybe even taken some Brain Damage, its brilliantly, enjoyably annoying.

For the Corp player, desperately rushing to Advance Agendas, but not trying to look like you are advancing Agendas, and ensuring that you generate enough credit to be able to Rez that Ice if you need to, does feel like you are spinning lots of plates, that you have to cope and manage your 'business' on lots of fronts simultaneously. All of this means that there is never a dull moment in Android: Netrunner, each player has a very specific, well understood and achievable goal to work towards with each and every Click.

Android: Netrunner has its own, specific vernacular, which isn't uncommon in many games these days, however, in this game it feels very much like it uses this in place of a more fully implemented theme, this is most obvious in the rule book, a 36-page book with lots of facts and examples but very little flavour (except a slab of it towards the end).

When I introduce people to this game I try and use the game language, yet often I get "So, Ice is basically a Firewall?" And "Clicks" very quickly become "Actions".

This makes the learning curve for this game a bit steeper, one of the best things I ever did with Netrunner was buy some play mats as they really, really help when you start playing.  So, your first couple of games will be a bit rocky, there will be lots of referring to the rule book and maybe even some FAQs about some of the card abilities.

Once that is out of the way though, you can really get under the skin of this game, you can really start tinkering around with the decks and that is engaging, rewarding and above all; tremendous fun. This is what you are meant to do with Android: Netrunner; its why the box is so damn big for just a few cards and cardboard tokens, it is so you can fill it with all (at least some) of the expansions and boosters.

The game encourages you to buy the expansions, to add to your collection and find new and interesting combinations of effects, new ways to beat your opponent. As this is an LCG, new expansions become available throughout each year, all containing the same cards allowing you and your friends to evenly compete making Android: Netrunner not just a game of deck building, of luck and strategy but also one of intelligence.

If all you ever buy is the core set (and playmats, trust me, it is very worthwhile; you can tank me later), and you and a friend or two can work through those first difficult games you will very quickly, very deeply fall down the rabbit hole that is Android: Netrunner and never look back.