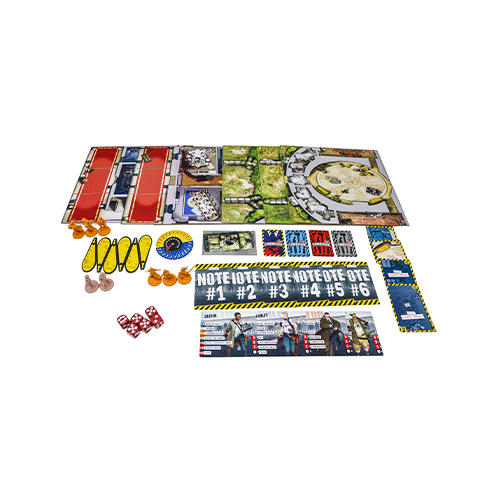 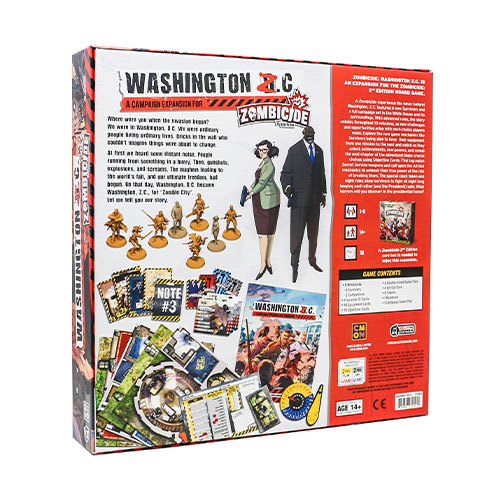 Pay in 3 interest-free payments on eligible purchases. Learn more
Success! We will let you know when this product is available again.
Your email address has been unsubscribed!
Your email address has been unsubscribed!
Notify me when this product is available to purchase!
This email address is already subscribed to this product!
Washington Z.C. Expansion introduces for the very first time for Zombicide a story-driven campaign, full of flavorful and impactful surprises and choices, in addition to advanced rules, new characters and an iconic location.
Read More
Category Board Games Tags Exceptional Components, Zombicide SKU ZBG-GUGZCD002 Availability Out of stock
Share
Share this
77%

Washington Z.C. Expansion introduces for the very first time for Zombicide a story-driven campaign, full of flavorful and impactful surprises and choices, in addition to advanced rules, new characters and an iconic location.

In Zombicide: Washington Z.C., 1-6 players take on all-new challenges during the zombie apocalypse. The expansion for Zombicide: 2nd Edition adds six new survivors and 10 new missions, which can be played in a brand new campaign mode. Here player progress is saved between scenarios, allowing them to start with better gear and skills at the start of the next mission. Time is also not on the survivor's side, with the brand new night and day mechanic. Sure, they may be able to stay hidden from zombies in the dark, but it also means more zombies hordes to fight come daybreak.

In it for the Long Run

As I said in my review of Zombicide: 2nd Edition, I am a huge fan of the series. I've gobbled up every iteration of the modern-day setting like a brain-hungry zombie. So I was extremely excited to take a bite out of this new expansion and even more excited to try the all-new campaign mode. I've used Zombicide as a gateway game for the majority of my gaming group. So the thought of the series branching out into a campaign mode and me being able to use it as a gateway game to legacy titles is an exciting prospect.

Being an expansion you won't find the usual treasure trove of mini's that CMON has become famous for. Sure, you get 6 new survivors and 2 companions, but that's it on the miniature front. You get the 6 survivor ID cards, which detail their skills and perks that can be accessed by levelling up. You also get six new game tiles, which make up various sections of the White House.

There's a bunch of new equipment cards in four flavours - Standard, Advanced, Pimpweapons and the all-new Secret Service deck. This features some entirely new weapons and equipment exclusive to Washington Z.C. including the extremely useful night-vision goggles, which are vital for when it gets dark (more on than in a bit). Ten sets of Objective cards (one for each mission), a Humvee, light beams, six All Out dice, Campaign Survivor Sheets, the Night & Day dial and a rulebook rounds off the contents.

First of all, there's the all-important campaign mode. Which allows players to take survivors through a ten mission slaughter-fest. You'll battle through the familiar streets of Zombicide: 2nd Edition to the White House. Along the way, Survivors will have the usual main objectives to complete each mission. But this time around there are also objective cards dotted around each map that give additional tasks. Without getting too much into spoilers - these range from simply clearing out zombies, escorting and reuniting families to arming and firing the cannon of a tank. As well as these new objectives, some missions come with notes that mustn't be read out until instructed. Occasionally these will turn a mission on its head and override the original objective. Some even have achievements, which are noted on player's Campaign Sheets and can affect certain things in later missions.

In standard Zombicide, once a mission is complete, that's it. It's time to pack up. But in Washington Z.C. progress carries over and survivors can earn campaign experience points (CXP). This is used to level up survivors separately from their usual Adrenaline level and allows them to pick unique and permanent skills from the Campaign sheet. Survivors can also keep the weapons they find on the battlefield, but only if they pass a "Weapon Check". This is where people that prefer more tactical games will groan.

Most weapons in Washing Z.C. have a number in a padlock in the upper left corner (those that don't are immediately lost at the end of the mission). That padlock number represents how many "All Out" dice must be rolled for a weapon check. Once rolled players must check to see if they rolled a '1', which is shown as a breaking symbol on the dice. Rolling even one of these symbols means the weapon breaks and is returned to the deck. If the roll is successful (one that doesn't have a break symbol) that weapon is carried over to the next mission. It's purely luck-based. I had one survivor lose every weapon after every mission and another who managed to keep their Golden AK-47 from the beginning of the campaign to the very end.

The All Out dice also have another use. Most Survivor weapons now have a red number above the usual number which states how many dice are rolled when firing it. This red number indicates how many additional dice may be used. Annoyingly these must come from the All Out dice pool and, the same when rolling weapon checks, rolling a break symbol breaks the weapon. It's intended as a high-risk high-reward tactic that can potentially get a Survivor out of a tight spot.

The Campaign Sheets track progress through the campaign. Players record how many CXP they have. These are earned through some objective cards and for getting a Survivors adrenaline level into orange and then into red. Adrenaline levels reset to blue after every mission, meaning there's a potential to earn a minimum of two CXP per mission, per survivor.

There's also a new night and day mechanic. The start time of the dial is dictated by the mission. The end of every turn moves the dial along by an hour. Once it hits 7 pm, the map is plunged into darkness. The range of every gun is reduced to 0-1 and every dice roll must land on a six to hit. Basically, the entire map turns into a dark room from the standard Zombicide. And players will have to survive 12 rounds to reach 7 am and daylight again. Luckily there are more flashlights available, using these lights up a zone for everyone and negates the nighttime rule for that particular area. Unfortunately, it also attracts the undead hordes more than noise. There are also Nightvision Goggles, which negates the night rule for the Survivor wearing them.

Another cool feature comes into play when a Survivor takes a total of three wounds. In standard Zombicide the Survivor dies and the mission ends in failure. In Washington Z.C. other survivors have a chance to reach their fallen comrade, but they must do it by the end of the next turn. If they make it to the wounded Survivor they are rescued, removed from the board and live to fight another day.

The 10 missions see 1-6 players taking control of six Survivors (once again, there's no scaling for fewer players). They'll be tasked with carrying out some main objectives. Dotted around each map are objective cards that provide Survivors with additional tasks. Survivors and Zombies act in the same way they do in Zombicide: 2nd Edition, so I won't repeat it here. Once a mission ends players check to see if they've earned any achievements and/or CXP. They also roll All Out dice to see which weapons they carry over to the next mission, which I already mentioned.

Zombicide: Washington Z.C. is a great way to introduce people to Legacy games. It's simple and easy to understand but, unfortunately, has a few things that hamper the enjoyment and its longevity.

Firstly, the objective cards for each mission are great and several of the rewards for completing them are worth the detour. The only problem is they don't change when replaying a mission, even the locations are the same. Granted, there are a couple that are multiple-choice, but ultimately the choices end up resulting in the same reward but at different stages in the game. Some of the objective cards introduce interesting mechanics. A standout was one that allowed us to fire a tank if we found the correct ammunition. It'd be awesome to see more objective cards in future Zombicide titles.

Looking at the New Additions

The Night & Day cycle is also a great touch. It adds a tactical element that has been lacking in previous iterations. You can choose to sneak around in the dark completing objectives, but it can mean, come daylight, you'll be overwhelmed.

In some missions, you can see where it will end and work this to your advantage to grab some early CXP. Unfortunately, some missions can end abruptly. We had a few end just as we warmed up and miss out on precious CXP.

The Campaign Sheets are a fun addition, but you only get 24 in total. Be sure to get your laminators or photocopiers out! Some of the skills players can earn through CXP are great. "Low Profile" eliminates the much-improved but still annoying friendly fire ruleset. "Combat Reflexes" is another favourite, which allows a Survivor to get a free attack on a group of zombies as they spawn in. This made room clearing in the White House an infinitely smoother experience.

My biggest issue with Washington Z.C. though is the All Out dice mechanic. CMON intended this to be a high-risk high-reward tactic, but it doesn't work. Across the entire campaign, my group never found itself in a situation where we thought it was worth losing a weapon for two or three extra kills. Sadly this problem has a knock-on effect with the new Survivor pool. Three of them have several skills related to "Going All Out", making them fairly useless early on in each mission.  This creates an imbalance among the Survivors. My group stuck with the Survivors found in Washington Z.C. to remain thematic, but we were very quickly yearning for our beloved 2nd Edition team.

Ultimately, Zombicide: Washington Z.C. introduces some fantastic new mechanics that add an increased need for tactical thinking. The campaign is a blast to play. However, it quickly becomes stale on a repeat playthrough, unless it's with a different group. The All Out dice mechanic works on paper but certainly doesn't work as intended. But, once again, if you like Zombicide you'll like this. If you don't like Zombicide, there's nothing here for you and the All Out dice mechanic will hurt your brain.... mmmm brains.