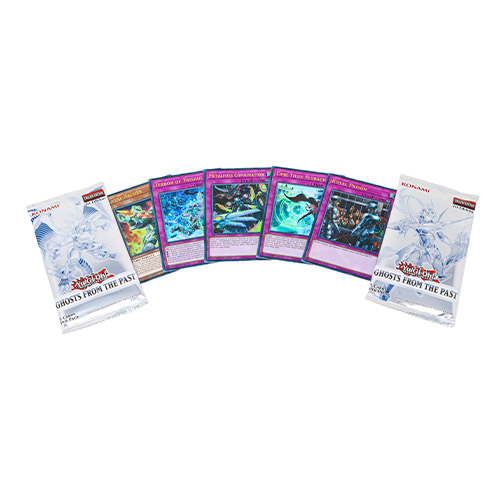 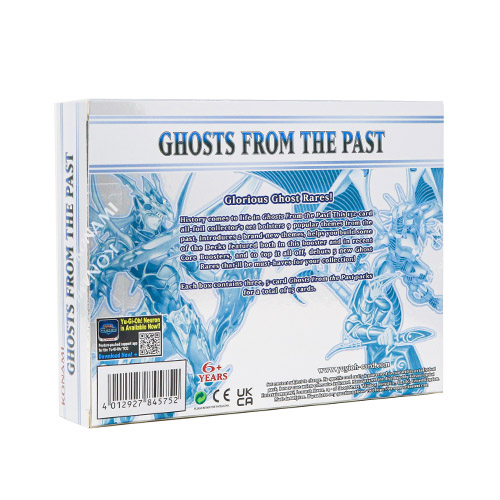 Yugioh: Ghosts From the Past

Pay in 3 interest-free payments on eligible purchases. Learn more
Success! We will let you know when this product is available again.
Your email address has been unsubscribed!
Your email address has been unsubscribed!
Notify me when this product is available to purchase!
This email address is already subscribed to this product!
History comes to life in Ghosts From the Past! This 132-card all-foil collector’s set bolsters 9 popular themes from the past, introduces 2 brand-new themes, helps you build some of the Decks featured both in this booster and in recent Core Boosters, and to top it all off, debuts 5 new Ghost Rares that’ll be must-haves for your collection! Nine Themes from the Past! Ghosts From …
Read More
Category Trading Card Games Tags Best Sellers, Konami SKU ZBG-KON84570 Availability Out of stock
Share
Share this
82%

History comes to life in Ghosts From the Past! This 132-card all-foil collector’s set bolsters 9 popular themes from the past, introduces 2 brand-new themes, helps you build some of the Decks featured both in this booster and in recent Core Boosters, and to top it all off, debuts 5 new Ghost Rares that’ll be must-haves for your collection! Nine Themes from the Past! Ghosts From the Past has new cards for 9 different themes from the past. Strategies from many different eras in Yu-Gi-Oh!’s history, like Dragunity, Shaddoll, and Cipher will be bolstered! Two Brand-New Themes! The villainous Spectre’s “Sunavalon” strategy from Yu-Gi-Oh! VRAINS takes root in Ghosts From the Past! This Plant-based Link Summoning theme lays out a cunning web of interconnected monster effects to trap unsuspecting Duelists. The second new theme will be a game original strategy. Want to Try Out a New Deck? If you thought the new Metalfoes cards in Blazing Vortex were cool but didn’t have the rest of the cards to try the Deck out, you can find them here in Ghosts From the Past. Need the original Armed Dragon LV10 to complete your Armed Dragon Deck? It’s here. You can also find cards like Raidraptor - Tribute Lanius, Dark Requiem Xyz Dragon, and Phantom Knights’ Fog Blade that you might need for that Raidraptor/Phantom Knight team-up Deck you’ve been working on since Phantom Rage released! Glorious Ghost Rares! Five cards in this set will appear exclusively (and rarely!) as beautiful Ghost Rares! See cards you love, like Blue-Eyes Alternative White Dragon, like you’ve never seen them before. Ghosts From the Past has 132 cards total, with 45 new cards and 87 returning cards, 5 of which appear only as Ghost Rares. All other cards appear in the standard gold Ultra Rare technology. Each box contains three, 5-card Ghosts From the Past packs for a total of 15 cards. The complete Ghosts From the Past set contains 132 cards: 5 Ghost Rares 127 Ultra Rares.

Each Yu-Gi-Oh: Ghosts from the Past box contains three 5-card packs, for a total of 15 cards.

5 ghost rares in a single set?! Welcome to Ghosts From The Past, Konami's yearly Spring reprint set. Previous sets which included ghost rares typically only featured one ghost rare. But now you have the opportunity to add 5 of them to your collection. I'll be taking a look at what you can pick up in Ghosts From The Past. We'll dissect the new support it brings. And, most importantly, if it lived up to the incredible pre-release hype.

Which Cards Have Been Included In Ghosts From The Past?

Overall, the set contains 132 cards. This is slightly more than usual. The set is made up of the 5 ghost rares and 127 ultra rares. That's right, the minimum rarity in this set is ultra-rare. This is something to think about when assessing the cost of this set. Each box contains 3 packs of 5 cards. You're getting a total of 15 cards per box of Ghosts From The Past.

The 5 ghost rares are the following:

Obviously, the main attraction of this set is the 5 ghost rare cards listed above, with Dark Magician being the most popular, most sought-after and most valuable card in the set. Duel Monsters era fans will be pleased with Dark Magician and Blue-Eyes Alternative White Dragon. Syncro players receive a Crystal Wing Synchro Dragon to prepare them for the upcoming Legendary Duelists: Synchro Storm booster. Black Luster Soldier - Soldier of Chaos finally gets a reprint, only in ghost rare form. And finally, Firewall Dragon makes a return with brand new artwork in the ghost rarity. As expected, these ghost rare cards are incredibly difficult to pack but provide excellent value for collectors and duelists if you manage to get your hands on one or more of them.

The archetypes supported in this set include Vampires, Lavals, Hieratics, Shaddolls, Nekroz, Fairy Tails, Cipher, and Time Thief. In terms of brand new archetypes, the first one to mention is the Sunvine/Sunavalon archetype from the VRAINS anime, which is a Plant archetype focused on Link Summoning. We also receive the Starry Knight archetype, a gang of Level 4 Fairies (plus Spells & Traps) focused on summoning Level 7 LIGHT Dragons from your hand. Finally, Dragunity cards from the OCG's Structure Deck make an appearance here in Ghosts From The Past, with "Dragunity Arma Gram", "Dragunity Legatus" and "Dragunity Remus", among others.

80+ cards have been reprinted in Ghosts From The Past. These include recently supported archetypes, a few classics and a couple of staples. Among the most noteworthy, you can find Laval, Hieratic and Dragunity reprints. There are also Galaxy/Photon, reprints of the entire Time Thief archetype. In addition, a few Madolche reprints, some Salamangreat foil upgrades and miscellaneous reprints for cards. This includes "Armed Dragon LV10", "Dragon Knight Draco-Equiste", "Ojama Country" and the very playable/popular "Evenly Matched". Dragon Knight Draco-Equiste is a personal favourite of mine.

Ghosts From The Past - Final Comments

Overall, there are a few nice reprints but the new Starry Knight and Sunavalon cards aren't that powerful. You can find "Evenly Matched" which is used in a lot of competitive decks, but apart from that, the 5 ghost rares are the ultimate prize. I like the fact that the minimum rarity is ultra-rare, so you do see some rarity upgrades. Now that the set has been released, you can buy boxes from Zatu, so I'd say it's probably worth trying your luck on a couple of boxes to see if you can pack those elusive ghost rares. Happy hunting!