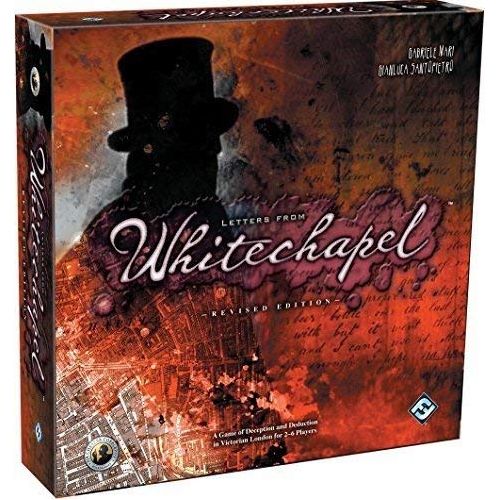 you could earn 3686 victory points

you could earn 3686 victory points

Letters from Whitechapel is a thematically engrossing board game of deduction in which one player takes the role of the infamous Jack the Ripper, while up to five other players are detectives pursuing him through Victorian London. After committing his horrible murders, Jack must outmaneuver the detectives in the tangled streets of the Whitechapel District. Meanwhile, the detectives …
Read More
Category Board Games Tag Fantasy Flight Games SKU ZBG-FFGVA88 Availability Restock Expected
Share this

Get ready to enter the poor and dreary Whitechapel district in London 1888 – the scene of the mysterious Jack the Ripper murders – with its crowded and smelly alleys, hawkers, shouting merchants, dirty children covered in rags who run through the crowd and beg for money, and prostitutes – called "the wretched" – on every street corner.

A full moon illuminates the foggy alleyways and back passages of Whitechapel. Carriages clatter down the streets, people clutter the paths going about their daily lives. There is a strange tension hanging in the air. Some terrible crimes have occurred as of late. The whispers on the street corners talk of a mysterious character known only as Mr Jack. A hooded figure brushes firmly past you causing you to stumble, you look up as they walk briskly off into the mist and vanish like a ghost.

As you gather yourself you hear the distinct harsh sound of a policeman’s whistle coming from the streets behind you. Has Mr Jack struck again? When will they find this murderous madman?

Letters from Whitechapel is a game for 2-6 players and centres around the murders of the infamous Jack the Ripper. One player takes on the role of Jack and over 34 nights is attempting to make it safely back to his hideout having committed his heinous crimes. The other players will be the investigators trying to search for clues and follow the path of Jack as he sneaks through the alleyways and uses his tricks to get back to the hideout.

If Jack can make it back to his hideout at the end of the fourth night then he has won and eluded the investigators. If the investigators manage to track Jack down and arrest him on the streets of Whitechapel then they are declared the victors.

Laid out in front of the players is a map of Whitechapel of London. The streets of the map are lined with numbers and black squares and dotted lines to indicate available routes and pathways.

The person playing as Jack will choose one of the numbered spaces and this will be their hideout. This is the spot they must make it back to each night from the site of their latest gruesome deed. Jack has a player screen which has a smaller version of the map on the inside and also it shields from the other players a pad on which Jack will mark down their hideout and also on each night it will allow them to mark down the space they’re on as they creep back to safety.

At the start of a night Jack will place on the board, over all of the potential murder sites, several white tokens which may have a red dot underneath. Where Jack places a red dot will be the starting location for one of the ‘wretched’ (victim). Once they have been placed the investigators will place their black tokens out which may have a coloured spot pertaining to an investigator pawn. Once they have completed they leave them in place and Jack reveals the sites that will have a wretched and replaces the tokens with the corresponding pawn.

At this point Jack has the option to commit murder and the chase begins or Jack can lie in wait. If Jack chooses to wait he can reveal one of the black investigator tokens and know if an investigator is there or it's a bluff. The investigators also get to move each wretched one space, which with knowledge they may have gained on previous round or knowing where their investigators will start could help them get an edge on Jack.

If Jack chooses to commit murder then he removes all of the wretched pawns and replaces one with a red disc which will note the crime scene and the start of Jack’s frantic and elusive journey back to the hideout. Jack makes the first move and notes the corresponding number on the pad and then the investigators begin their turn.

As I mentioned earlier, the routes in Letters from Whitechapel are made of black squares and numbers. Jack moves on the numbers and the investigators move on the black squares, Jack can never make a normal move through a space that contains an investigator. Each turn each investigator pawn can move one square along a route and either search for clues or arrest at a location.

If an investigator searches for clues they look to Jack and ask if Jack has been at any of the numbers adjacent to the investigators square that night. They will ask each number individually and if they find a number that Jack has been through that night then Jack will place a yellow disc over that number and then that investigator may ask no further questions regardless of how many spots they have not checked yet.

The other option for an investigator is to choose an adjacent number and declare they’re making an arrest on that space. If Jack is there they must declare it and the investigators win the game. Unlike searching for clues though, arresting is a one shot action. If you get it wrong and Jack is not there that investigators turn is over and no clues are given to as if Jack may have been there previously.

Jack has 15 moves in-which to get back to the hideout and gains an additional move each time they wait before committing the murder. If Jack does not make it back in that amount of moves then this player loses. Once Jack has made it back to the hideout the player must declare it and all clue tokens are removed from the board and you set-up for another night. Some things alter slightly on the third night but it's essentially the same again.

Jack has a few tricks up his sleeve for evading this investigators, using carriages to make a double movement and also pass through an investigator or using a lantern to cross a district through the back alleyways and come out on an adjoining locations.

Final Thoughts on Letters from Whitechapel

If you have a good poker face then you will enjoy playing as Jack in Letters from Whitechapel. Never have I known such inner turmoil and anxiety as investigators discuss my location openly amongst themselves and make potential moves based on their current knowledge. When one of the investigators declares that they have a hunch that you're on 81 and they glance at your face of stone desperately trying to contain the information that will reveal they’re absolutely correct. Trying to bluff and double bluff investigators or send them on wild goose chases my crossing back over yourself is fantastic and full of tension.

As the investigators try to get into the mind of the Jack player and think ‘what would I do’ whilst slowly trying to bring the net in around them as you gain a bit more knowledge each night as to the direction Jack is heading. And then making sure you have investigators following the trail of Jack whilst setting up investigators ahead of Jack poised to make an arrest at the right time.

There are many great deduction games out there but I really feel that the theme and mechanics of Letters From Whitechapel make it my favourite of the genre. The graphic design is fantastic and further immerses you in the world.

This is a fabulous game that I think works best with three people as Investigators. Five can be a few too many voices and the group can lose focus. Depending on how Jack plays the game, it can run a little long for some people as it promotes lots of discussion amongst the investigators and until they agree on a theory it can cause a little slow down.

For me it's a truly fabulous games that is not bogged down by heavy rules or unnecessary fluff. Letters from Whitechapel is a great game for a family game night (where the theme is age appropriate) and sits well with hardcore hobby board gamers.