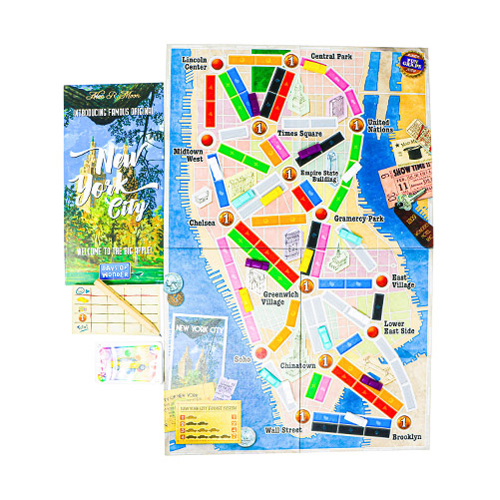 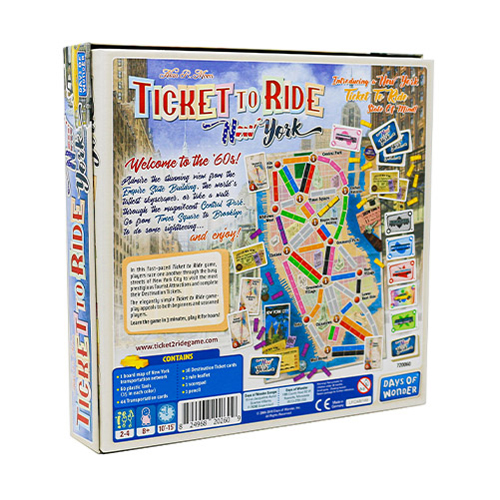 you could earn 1437 victory points

you could earn 1437 victory points

The set collection and route building game Ticket To Ride is truly a modern classic. In the original game you would claim routes across a map by playing a group of matching coloured cards. You would do this hoping to fulfil ‘tickets’ – journeys made up of multiple connected routes, with larger journeys worth more points. Unfulfilled tickets, however, lose you points at the…
Read More
Category Board Games Tags 6-8 Years, 9+, Alan R. Moon, Board Games, Days of Wonder, Podcast Approved, Ticket to Ride SKU ZBG-DOW720060 Availability 3+ in stock
Share
Share this
85%

The set collection and route building game Ticket To Ride is truly a modern classic. In the original game you would claim routes across a map by playing a group of matching coloured cards. You would do this hoping to fulfil ‘tickets’ - journeys made up of multiple connected routes, with larger journeys worth more points. Unfulfilled tickets, however, lose you points at the end of the game.

The large maps of North America and Europe created an interesting tug of war as players attempted to construct the most efficient network, plastic train pieces made the board grow in a colourful spider web fashion as the game progressed. Ticket to Ride: New York shrinks all those ideas into an amazingly quick battle of taxi routes across the titular city.

In essence, New York shrinks everything about it’s older sibling down, the box, the cards, the game length. The box claims 15 minutes and I was shocked to find this is entirely accurate. Due to the tighter map, smaller routes and shorter tickets, the game has become somewhat akin to a knife fight in a phone box.

Because Ticket to Ride: New York is so short, tickets become incredibly important and reading them correctly is key to doing well. If you want to maximise your points you will need to draw extra tickets fairly early on in the game, but of course that’s a risk because if you can’t fulfil them you are going to lose points.

There are a couple of differences in the gameplay too. Namely, the points are all totted up at the end rather than as you go along, and there are some landmarks on the map which give you a small amount of bonus points. The rest of the changes all come from that shrinkage of the core game.

So, in Ticket to Ride: New York you have a quick playing, intense version of a modern classic, perfect for those times when you can’t commit to a fuller game, or just as an aperitif.

How many Ticket To Ride versions and expansions are there now? I've lost count and every time a new one is released we start to wonder whether it's time to let this one go and settle. Days of Wonder think otherwise and so we now have New York to add to the mix - however this one throws a few weird twists into the usual formula.

Firstly we're not using trains in Ticket to Ride New York, it's now plastic cab cars and they aren't of the same quality as we're used to, to keep the price point down. OK whatever, you're still connecting locations to each other whether it's cities or districts. But the unusual nature of New York is that it boasts a play time of 15 minutes on the box, putting this one into filler game territory - most other Ticket to Ride games will set you back about an hour typically.

Now if you're been in the industry as long as I have, you'll know that 99% of publishers lie about the time lengths of games forgetting important aspects such as teaching, set-up, take-down and first-time learning games. So 15 minutes is a bold claim - most micro games don't even manage that.

Well I sat down for a two-player game, both of us being Ticket To Ride veterans and I recorded a video from it (see more on my Broken Meeple channel soon). It plays out exactly as you would expect it to - you have a small map of connections, you pick up coloured cards in "Rummy" set collection style and then you play those cards to place your cabs down to get points and fulfil tickets.

It's pretty cut-throat though. You don't have many routes on the board period and so waiting too long before placing tracks down is a bad idea. Four-player mode in particular is downright nasty almost making the idea of going for a long ticket (well long in the context here) a suicide mission.

But, I kid you not, we were scoring up after 10 minutes and 20 seconds. So with set-up included we got it done in less than 15 minutes. 3-4 players would likely mean about 15-20 minutes run-time.

So it does exactly what it says on the box. It's Ticket To Ride in 15 minutes. No change in established rules, bar one tiny addition to the scoring - which is fairly trivial in nature anyway. My only concern is who the target audience is for this? If I want to play Ticket To Ride I want to play one of the cool new maps. If you've got kids, this works great but then there is also My First Journey to consider.

Ticket to Ride New York is however faster, cheaper and more portable than the other options out there. So I'd consider for yourselves whether you're looking for a 15 minute Ticket To Ride filler - if so, New York is one to pick up.