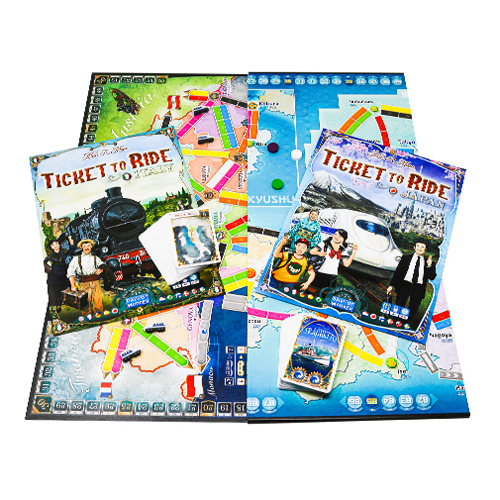 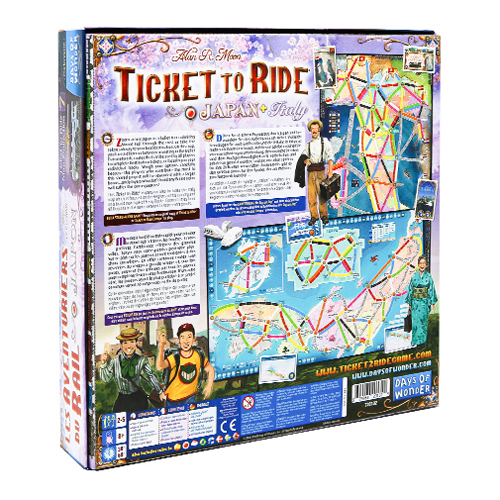 you could earn 2949 victory points

you could earn 2949 victory points

There’s more Ticket To Ride Map Collections now that you can shake a ticket at! Volume 7 – Japan and Italy is one of the latest and greatest expansion map packs from Days of Wonder. It builds on the winning, popular formula of Alan R. Moon’s classic gateway game, Ticket To Ride. You need to use smart hand management with set collection in mind. You’ll spend cards to build ro…
Read More
Category Board Games Tags Best Sellers, Podcast Approved, Zatu Platinum Award SKU ZBG-DOW720132 Availability 5+ in stock
Share
Share this
90%

There’s more Ticket To Ride Map Collections now that you can shake a ticket at! Volume 7 – Japan and Italy is one of the latest and greatest expansion map packs from Days of Wonder. It builds on the winning, popular formula of Alan R. Moon’s classic gateway game, Ticket To Ride. You need to use smart hand management with set collection in mind. You’ll spend cards to build routes and train networks. Of course, these two country’s maps have their own fun twists! It comes with a double-sided board, with one map on each side.

Japan’s map features the mainland as well as south-western island of Kyushu. Also present is a separate mini-map of Tokyo’s subway network! Tickets list subway links as well as city-to-city links. Another thing to consider are the Bullet Train routes between certain cities. These are grey, and to play here you hand in as many same-colour cards as the length of that route. You don’t place your own trains on them. You place a single Bullet Train miniature on it. This route is now public for any player to use to complete a Ticket throughout Japan!

On the reverse side of the board, you can play in Italy. There’s many coloured regions on this map. Players score ever-increasing bonus points if they build networks that connect multiple regions. There’s also plenty of ferry routes available (grey routes). All ferry routes have spaces that comprise of 1-4 ‘wave’ symbols. To complete a ferry route, you need to pay in Locomotive (wild) card for every wave symbol. Or, you can pay a ferry card, which you can draft separate to regular train cards.

Please note that this is an expansion pack for Ticket To Ride. You’ll need a copy of the base game itself, or Ticket To Ride: Europe to play Map Collection – Japan and Italy.

The artwork on the Japan map is beautiful, it has a pastel tone which is very inviting. I love the little details on the board such as the traditional tea set and the cherry blossoms and bonsai tree. The artwork on the tickets is as lovely as the board art. The game also comes with some tiny plastic bullet trains which are of excellent quality.

Japan has two gameplay twists. First up is the two zoomed-in cities with their own separate sections from the larger map of Japan. The cities in question are Kyushu and Tokyo. The tickets in these areas are worth more points but tend to be riskier to complete. This adds a little high risk high reward aspect, though it's minor.

The shared routes in Ticket to Ride Japan mean you don't need to worry as much about an opponent blocking your route. Depending on what type of gamer you are, this could be a positive or a negative!

I tend to opt for this map when I want a less stressful game of Ticket to Ride. It provides a more 'zen-like' experience than some other more tense maps. Despite this, it has enough player interaction and competition to keep it interesting. The end-game bullet train goal is excellent. It changes how you play by encouraging you to balance which routes you need to build. I like it a lot more than the Longest Route and Globetrotter bonuses. Japan plays 2-5 players and it scales well at all these player counts. Japan is one of the faster Ticket to Ride games too as everyone uses fewer trains.

On the flip side of the board is the Italy map. The board features some lovely artwork, is good quality, and everything is clear. The only other components are the 10 double-sided ferry cards and the Italy tickets. The artwork on both sets of cards is good, and the tickets have a nice watercolour aspect to them.

Instead of Globetrotter or Longest Route, Ticket to Ride Italy has the Regions Bonus. There are 17 named regions on the board and each city belongs to one of them. A coat of arms denotes each region, and it is clear on the board which city belongs to which region. Players score these by counting their number of connected regions and scoring points according to the provided chart. Connecting 15 - 17 Regions snags you a whopping 56 bonus points at the end of the game which can be a huge swing in the scores!

Ticket to Ride Italy plays 2-5 players and you have all 45 of your trains to work through. Italy feels much more like a standard map than Japan. The Regions Bonus is like the end game bonus in Ticket to Ride London so it is not unique. Trying to connect regions rarely affects deep strategy, but as a mechanism it works just fine. The ferries are a very nice addition. Since you can use one card for two wave symbols, you can often use one card to place two train pieces. This speeds the game up despite each player using all 45 trains. Italy has some very high scoring tickets, going all the way up to 28 points. Due to the high-value tickets and the Regions Bonus, end-game scoring can vary a lot!

Final Thoughts On Ticket To Ride Japan And Italy

Ticket to Ride Japan and Italy is an excellent expansion and both maps offer very different Ticket to Ride experiences from one another. Japan is one of the best and most unique Ticket to Ride maps available. Italy is more standard but is a fun map nonetheless. Neither map is too much of a step up in rules from either Ticket to Ride or Ticket to Ride Europe. If you have played the base game a lot and want to spice things up, this expansion is the perfect place to start.