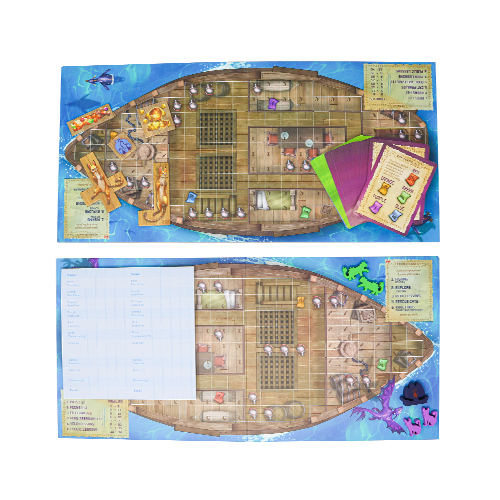 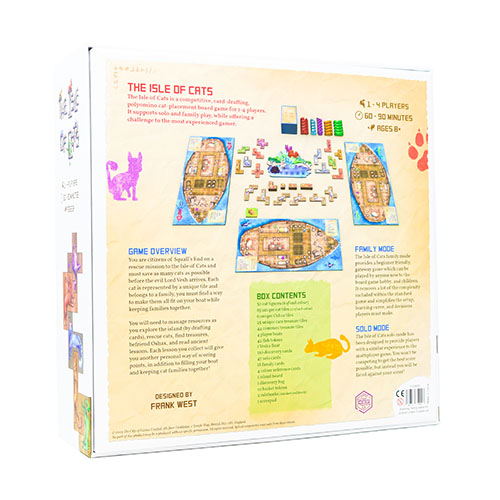 The Isle of Cats

you could earn 3795 victory points

you could earn 3795 victory points

The Isle of CatsThe City of Games are a UK publisher with a varied output. From The City of Kings, to Valoran Gardens and now The Isle of Cats. The Isle of Cats is a game about filling a boat with cats. The cats come in various Tetrisy shapes and different colours. You will have to keep families (colours) of cats together, while also maximising your scoring.As well as placing your c…
Read More
Category Board Games Tags BGG Top 100, Dice Tower, Frank West, Podcast Approved, The City of Games, The Isle Of Cats, Zatu Platinum Award SKU ZBG-TCOK601 Availability 3+ in stock
Share
Share this

The Isle of Cats The City of Games are a UK publisher with a varied output. From The City of Kings, to Valoran Gardens and now The Isle of Cats. The Isle of Cats is a game about filling a boat with cats. The cats come in various Tetrisy shapes and different colours. You will have to keep families (colours) of cats together, while also maximising your scoring. As well as placing your cat tiles on your ship you will be drafting cards and these cards will dictate your game strategy. You will draft lesson cards that give you points for achieving different objectives, baskets for holding any cats you manage to rescue, treasures to capture, and hopefully ways to befriend high scoring Oshax felines. Filling your boat is also important, as any rooms you haven’t filled and rats you haven’t covered will lose you points at the end. As well as baskets to catch cats you are going to need to tempt them with food – in this case fish. At the start of every day (round) you will be given 20 fish from the supply, and will then draft cards until you have 7 each. From this selection you will choose which cards you want to keep and pay the cost in fish. Don’t go overboard though as you will need to save some for luring cats too. Lesson cards are either public or private and offer up more point scoring opportunities. Green cards help you catch cats by giving you a speed value (highest speed gets first pick of the cats) and baskets to use. Cats are in one of two fields and each have a cost associated with it which must be paid in fish. Isle of Cats is a great choice for gamers and families with it’s easy to simplify rules and also includes a ruleset for solo gamers. Player count: 1-4 Time: 60-90 minutes Age rating: 8+

The Isle of Cats is a competitive, medium-weight, card-drafting, polyomino cat-placement board game for 1-4 players (6 with expansions).

You are citizens of Squalls End on a rescue mission to The Isle of Cats and must rescue as many cats as possible before the evil Lord Vesh arrives. Each cat is represented by a unique tile and belongs to a family, you must find a way to make them all fit on your boat while keeping families together.

You will also need to manage resources as you:

Explore the island (by drafting cards)
Rescue cats
Find treasures
Befriend Oshax
Study ancient lessons
Each lesson you collect will give you another personal way of scoring points, and there are 38 unique lessons available.

Complete lessons, fill your boat, and keep cat families together to score points, the winner will be the player with the most points after five rounds.

A new adventure of exploration and salvation awaits on a remote island. However, this is not the typical quest of kicking evil to the dirt. Befriending the native creatures (the fabulous felines) and saving them from a looming threat is the primary goal.

The Isle of Cats is the third Kickstater success from publishers The City of Games, and the third title from designer Frank West’s ever-expanding world of boardgames. With regard to West’s previous games, Isle of Cats is more alike to the puzzle solving of Vadoran Gardens.

Easily, The Isle of Cats is one of the best polyomino adventures that the boardgame industry has to offer, yet it is so much more than just a polyomino puzzle.

What is The Isle of Cats?

The Isle of Cats is a 1-4 player game (this can be extended to 1-6 players with the Late Arrivals expansion). Depending on the number of players, the game usually takes between 60-90 minutes.

There are many elements which come together to make this boardgame addictive. However the polyomino style placement (geometric shapes like those in Tetris) is the highlight of the game. There is something extremely satisfying about slotting high quality tiles together and arranging colourful cats.

What is the cause for collecting these cats you ask? The home of the magnificent cats is under threat. The looming evil of Vesh Darkhand is spreading, a familiar enemy to those who have played The City of Kings. Although protecting the island itself is out of your hands, there is still time to save the island’s inhabitants.

Players are each given a boat which they can use to stow cats and store treasure.

The Isle of Cats is a competitive game, in the sense that players are aiming for the best boat cargo. There are little ways that players can impede each other directly. Afterall, you and the other players are working together to save the cats. Although, perhaps another player could befriend the cat you were hoping to slot into an awkward spot.

As previously mentioned, each tile features a charming cat from the various species that grace the isle. Placing cats together of the same species (indicated clearly by colour and design) begins to form a cat family. The bigger the family, the more points you will net.

Although, the finicky felines love to sprawl out and play. The real challenge is getting the various shapes of the cat tiles to fit nicely within the boat!

Cats can also be used to catch the pesky rats aboard the boats, allowing players to avoid minus points. Minus points can also be avoided by efficiently placing the cats into the different rooms on the boat. The less empty rooms on your boat, the less minus points!

The family mode (an easier mode ideal for inexperienced players) features the cat placement only. This guarantees for a fun yet not overly complicated game.

Strategy beyond cramming cats in a boat lies within card drafting and the various effects these cards award. The card types are as follows: Lesson, Rescue, Treasure, and Anytime cards.

Lesson cards create new rules, awarding or deducting extra points if the conditions of the lesson card is met. For example, players can receive extra points for having a specific number of cats or extra points per particular colour of cats touching the edge of the boat.

This adds extra layers of strategy and tactics to the game. Lessons also enforce the opportunity for players to change their initial plans and take risks!

Rescue cards have the two aspects of baskets and boots. Baskets determine how many cats you can befriend and  boots how quickly you are able to get to the cats. Along with the currency of the game, fish, baskets are needed to transport cats from the isle to the boat.

Along with cats, treasure can also be collected and stowed using treasure cards. Common treasures are smaller shapes that can be used to fill any awkward gaps in boats. Rare treasures are bigger and more bountiful, granting extra points.

Treasure cards can also gift players the most rare and friendliest cat of all. Not only are these rare, Oshax cats larger, they are also used to represent any species of cat. This is super handy when you need a particular colour of cat to add to a family.

Anytime cards have various effects that can be played, anytime. Examples being, draw extra cards, gain extra fish per treasure on your boat, or rescue two cats instead of one. Anytime cards are a fun way to spice up the game.

The extra-special quality upheld by The City of Games publishers prevails within The Isle of Cats. There is attention to detail with each card, meeple and token. Clearly, a lot of love and thought has gone into the making of The Isle of Cats.

However the highlight of the components is of course the cats! Each cat tile has a unique design, adding to the games charming characteristics. Information about each cat species is even included! Allowing players to become fully engrossed in the cat expedition.

Unique player boards (the boats) are also provided, with different design details and layouts. A huge score-tracking book and a pencil is even provided! You’ll have everything you need to immediately start playing with the fullest experience.

You don’t need to be a crazy cat person to enjoy this game. The Isle of Cats upholds in depth strategy and puzzle solving whilst still being a fun and light-hearted game.

What’s more, The Isle of Cats is a well-rounded game that both inexperienced and veteran gamers can enjoy. Overall, a very recommendable game bursting with high-quality and fun gameplay!

The Isle of Cats also features a solo mode which mimics the layered aspects of the multiplayer game. The opponent simulation style of play features multiple difficulties, and the progression within this game mode is very rewarding.

The Isle of Cats online communities are very friendly, especially the Facebook page. Post cat pics and ask questions about the game. Fellow players and the creator himself will be sure to answer any questions or simply have a friendly chat.