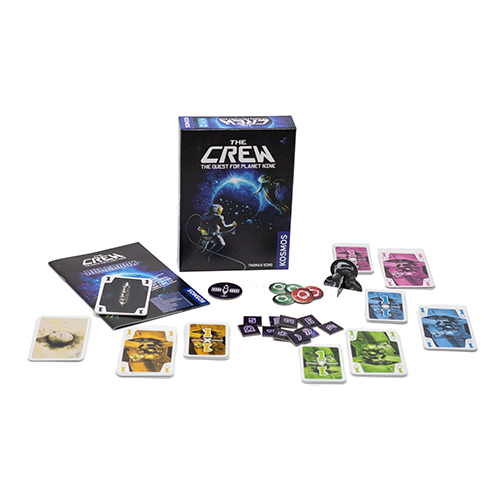 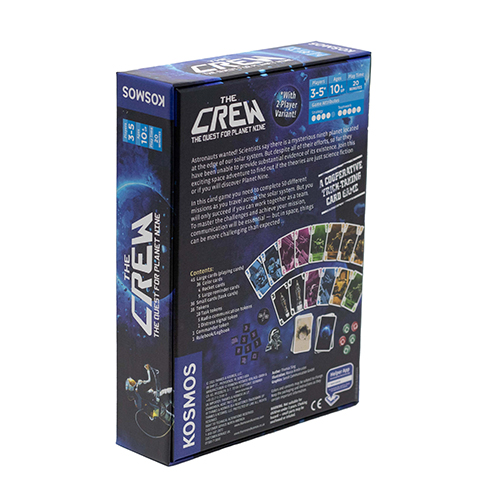 you could earn 999 victory points

you could earn 999 victory points

In the co-operative trick-taking game The Crew: The Quest for Planet Nine, the players set out as astronauts on an uncertain space adventure. What about the rumors about the unknown planet about? The eventful journey through space extends over 50 exciting missions. But this game can only be defeated by meeting common individual tasks of each player. In order to meet the varied chall…
Read More
Tags Best Sellers, BGG Golden Geek, BGG Top 100, Dice Tower, kennerspiel, Spiel des Jahres, Zatu Gold Award SKU Z-THKO-691868 Availability 3+ in stock
Share
Share this

In the co-operative trick-taking game The Crew: The Quest for Planet Nine, the players set out as astronauts on an uncertain space adventure. What about the rumors about the unknown planet about? The eventful journey through space extends over 50 exciting missions. But this game can only be defeated by meeting common individual tasks of each player. In order to meet the varied challenges, communication is essential in the team. But this is more difficult than expected in space.

The team wins only if every single player is successful in fulfilling their tasks.

In the co-operative trick-taking game The Crew: The Quest for Planet Nine, the players set out as astronauts on an uncertain space adventure. What about the rumors about the unknown planet about? The eventful journey through space extends over 50 exciting missions. But this game can only be defeated by meeting common individual tasks of each player. In order to meet the varied challenges, communication is essential in the team. But this is more difficult than expected in space.

The team wins only if every single player is successful in fulfilling their tasks.

The Crew: The Quest for Planet Nine

Back when I was a wee nipper, living in the wilds of Kent, I used to while away my time daydreaming about becoming an astronaut, fuelled by the optimistic illustrations of Usbourne books and Space: 1999. Sadly, it was not to be, due to my flat feet, myopia, allergy to vigorous activity, not being American and the staggeringly large amount of work that I would have to have done to become an astronaut (what can I say? I'm a lazy, lazy man).

I still loved the idea of exploring space, a love that I have carried into my relative dotage and hopefully passed onto at least one of my much-cleverer-than-me sons (I want my space elevator, okay?) - in summary, I'm a sucker for space and love a good space game.

The Crew, designed by Thomas Sing, illustrated by Marco Armbruster and released by Kosmos (best known for their challenging one-shot Escape-Room-In-A-Box games), is a co-operative, campaign-based trick-taking game for 2 - 5 players that follows the adventures of a crew of intrepid astronauts as they attempt to find the elusive ninth planet (not Pluto - Pluto has been downgraded to 'dwarf planet'). Now I know that, regardless of hapless astronauts or Pluto's diminished status, you're probably looking at that collection of terms describing the game and thinking 'are you sure?' Oh yes, I'm sure.

The Crew is incredibly simple to play at first glance. At the start of a mission, all cards are dealt to the players and whoever has the 4 rocket is 'the captain'. The captain lays down a card from one of four different colours - pink, green, blue and yellow - numbered 1 to 9. Each other player then plays a card of the same colour (if they have one) or different colour (if they don't).

Whoever plays the highest card of the opening colour wins the trick. Unless instead of a different colour, they play a rocket card (numbered 1 to 4), which will trump the trick, and a higher rocket card will trump that rocket card and so on. Very simple. Only… it's not that simple because 1) this is co-operative and 2) it's a campaign - you can't just wade in and take as many tricks as possible (this isn't Whist, you know) because certain players will have to win certain cards. These are determined by the task cards.

There can be any number of task cards (smaller cards with a number and colour that corresponds to one of the playing cards) which have to be achieved to complete a mission. There are different ways in which they can be distributed, but they are usually distributed like this: the captain chooses a task card, then the rest of the crew take it in turns to choose task cards until all the tasks are taken. The idea is that you take tasks that you are sure you can complete… or are pretty sure you can complete. To complete the task, you have to make sure that you win the trick that contains that card. Not looking so simple now, is it?

Fortunately, you're not completely on your own out there, because for most missions you have a couple of ways of getting some assistance - communication and the distress signal.

Now this is where the crew might realise that they have made a horrible mistake in choosing their tasks, but fortunately you (usually) have the distress signal. By using the distress signal, each player can pass a card from their hand either left or right (the crew have to choose) - after that, they're on their own with the mission. As for the missions? Well, they don't make things easier…

Houston, We Have A Problem

Missions can be played on a pick and choose basis, but the game is supposed to be played as a campaign, so the more you play, the harder the missions get - on some, the captain might have to choose who gets missions or just get all the missions themselves; comms might be out or the distress signal might be kiboshed.

The most common problem, however, is that the tasks will have to be done in a specific order, either through numbering, prioritising or both - it can be a real problem when you might be able to complete more than one task in a trick but have to stick to the order or fail the mission. The missions also have a story line, starting with the crew coming together for the first time and ending… well, that would be telling - and certain events in the story will determine certain outcomes for the mission, for instance… no, that would be a spoiler, even if it were a minor one but… you'll see. Suffice to say, you can end up pretty invested in this simple little game.

Let All The Children Boogie

It is an investment, too - the second half of the rulebook acts as a log book, so you can pick it up from where you left off with your games group… which seems a pretty strange thing to say about this curious little trick-taking game, and that's the core of its appeal - it may be small, but there's an epic story to be told here.

For me, though, it has a look that reminds me of those Usborne Books of Space, that frantic feel and against-the-odds play that reminds me of Commander Koenig trying desperately to keep things under control as the moon careers out of the solar system into a bizarre, bewildering galaxy - it is astonishing how they've managed to cram so much thematic action and cliff-hanger style peril into such a seemingly little card game. It's no Gloomhaven, for sure, but a game this size shouldn't be able to pack the campaign-based punch that it does; and it won't take up such a huge chunk of shelf space to do it.

With The Crew: The Quest for Planet Nine stirring the gaming community and winning over 30 awards worldwide since its release in 2019, KOSMOS has gifted fans and new players alike with a second instalment to the franchise; The Crew: Mission Deep Sea. This adventure has players searching for the lost continent of Mu in 33 brand new missions with some new exciting twists to the gameplay.