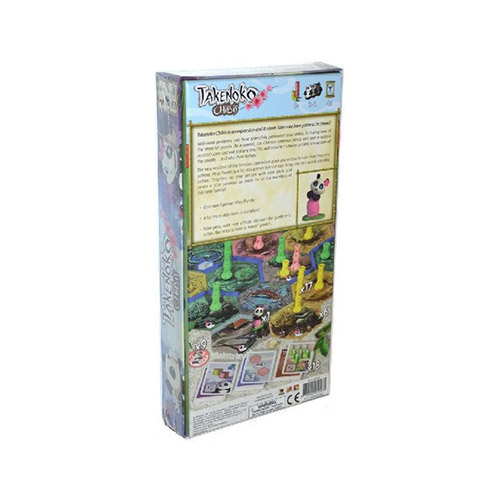 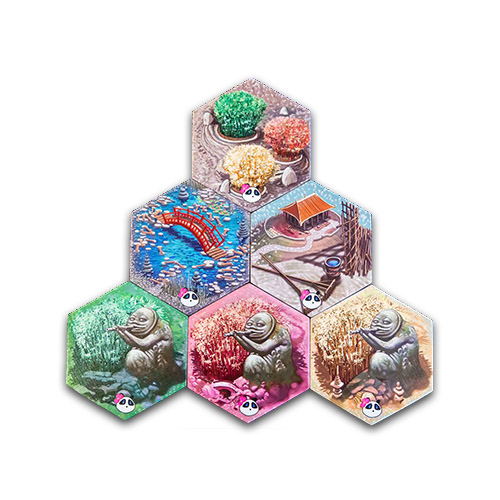 There’s only one thing that could possibly make Takenoko, the game about growing a garden and feeding colourful bamboo to a panda, more appealing… And that’s adding more pandas! Designer Antoine Bauza knows how to tug at heartstrings. Chibis (Japanese slang for ‘something short’, as in, a small animal) is an expansion for the superb gateway game Takenoko and it introduces …
Read More
Category Board Games Tags Antoine Bauza, Asmodee, Dice Tower SKU ZEG-ASMTAK02CHI Availability 5+ in stock
Share
Share this
92%

There’s only one thing that could possibly make Takenoko, the game about growing a garden and feeding colourful bamboo to a panda, more appealing… And that’s adding more pandas! Designer Antoine Bauza knows how to tug at heartstrings. Chibis (Japanese slang for ‘something short’, as in, a small animal) is an expansion for the superb gateway game Takenoko and it introduces not only a mama panda, but also baby pandas. The latter of which can be earned if both pandas cross paths in the Emperor’s garden! Takenoko: Chibis isn’t just a cute overload for cute-overload’s sake, though. Also in this expansion lies six additional hexagonal garden plot tiles (plus extra bamboo pieces to compensate) as well as 18 extra Objective Cards. Together these add a wonderful extra level of strategy into the mix, which is ideal for those who feel they have mastered the base game of Takenoko – which, in its own right, is an excellent gateway game for folks new to the world of board games. Remember, Takenoko is a race of sorts. The end-game is triggered once someone has completed seven (in a four-player game) Objective Cards. The beauty lies in that the Objective Cards are all worth varying victory points depending on how challenging they are to complete. Do you rush to complete low-value ones? Or work tirelessly to complete the harder, more valuable ones? On your turn you’ll roll the Weather Die to see which bonus you’ll get, then you get to either extend the Emperor’s Garden, move the panda and eat bamboo, move the gardener and grow bamboo, gain irrigation pieces, or take another Objective Card. The main rule tweaks that come in Chibis are to do with those new garden tiles. Some tiles have the mama panda symbol on them – she doesn’t start in the garden until one of these tiles is placed. Then, instead of opting to move the male panda as one of your actions, players can move the female. If she and the male panda land on the same hex, the player can discard one bamboo shoot to acquire a baby panda token (imagine Sir David Attenborough narrating that). The babies (the Chibis, themselves!) offer not only end-game victory points, but also immediate benefits, such as being able to exchange unwanted Objective Cards, or gaining sought-after irrigation or hex-improvement chits. That, and being ridiculously cute! Other unique garden hex tiles include a plot that grows all three types of bamboo, a ‘Sacred Hills’ spot that, when the gardener lands on it, grows bamboo on all matching colour plots, a second pond (which really helps irrigation networks!), and the gardener’s cabin, where players can visit to gain more Objective Cards. Takenoko: Chibis is not a wild leap up in difficulty, strategy-wise – it’s more of a pleasant hike. It’s still the same bright, colourful, fun Takenoko – trying to build and grow the garden in a way that suits the hungry panda best to match your Objective Cards. Like many expansions, once you’ve tried Chibis, you’ll find it tough to go back to ‘vanilla’ Takenoko! Player Count: 2-4 Time: 45 Minutes Age: 8+

We've already reviewed Takenoko on our blog, so this review will focus on the fresh content that Chibis brings to the game...and I'll do my best not to be too biased by an adorable second panda miniature that the game comes with!

More pandas (and some other new stuff)

I don't think it's an understatement to say that brand-new pandas are one of the biggest draws to Takenoko: Chibis. With a brand-new Miss Panda miniature and nine very cute panda baby tokens, there is more than enough to keep fans of the game's original theme happy. And, as much of the new gameplay stems from these pandas, they seem like a good place to start with the review.

Unlike the panda (Mr Panda?) from Takenoko, Miss Panda doesn't start the game on the pond tile. She starts off the board, and only enters when a tile with a panda symbol (another new addition) is added to the board - more on those tiles shortly. Once she's on the board, Miss Panda is moved with the panda action and can only move in straight lines, just like Mr Panda. If you use the panda action to move her, you can't move Mr Panda as well.

However, Miss Panda doesn't eat the bamboo. Instead, when she is moved onto the same spot as Mr Panda, the player who moved her has the option to trade in a section of bamboo to, ahem, make a baby panda. The player then takes a baby panda token that matches the colour of the traded in bamboo. Baby pandas give two points at the end of the game, and also give one of three instant bonuses:

The addition of Miss Panda and cute baby tokens is exactly what you would expect from a good Takenoko expansion. One of the main draws for the original game is its adorable theme, which Chibis builds upon unashamedly. The look and feel of the additions is spot on, and the gameplay choices they bring add a new layer of strategic depth.

Other additions in Takenoko: Chibis

Along with more pandas, Takenoko: Chibis also adds new plots and new objective cards, all of which come with new strategic possibilities. All six of the new plots have the Miss Panda symbol I mentioned in the last section, and add interesting content:

The new plots add interesting twists to the mechanics introduced in Takenoko, and bring in more strategic possibilities, as well as affecting the movement of Miss Panda.

Alongside the new plots there are also new types of objective cards, including groups of minimum length bamboo shoots, arrangements of plots containing Miss Panda tiles and panda cards that have to be cashed in on a pond tile. Some of these objectives tie into the rest of the expansion's new content, while others stand alone and serve to shake up the strategy more generally. It's a nice mix.

The base Takenoko game is known for its simplicity and accessibility. The additions of Chibis maintain the game's look and feel at the same time as ramping up the strategic complexity (though it's still not a heavy game by any stretch). My wife and I use the expansion in our two-player games, but we leave it out if we're teaching Takenoko to new gamers. Chibis isn't complicated if you're used to the game, but adds too much for less experienced players to think about if it's their first time playing Takenoko in any form.

For those who have played Takenoko a few times, Chibis definitely ups the replay-ability by increasing the possibilities, giving you more options for each turn and your overall strategy. I don't need a game to be really complex to be able to enjoy it, but I do think Chibis added depth improves Takenoko overall. If players found the base game a little shallow, I think the expansion will make it more attractive.

Still, it has to be said that the addition of new content does increase the unpredictability of the game. It's harder to know exactly what cards and plots are going to come up, so it's more likely that something's going to throw a spanner in the works. For me, that adds to the fun and the need to be flexible, but I know that there are some players who will dislike this added variance.

In terms of play time, Chibis adds nothing; the game still ends at a set number of cards. Maybe thinking time is increased slightly, but there is not so much more to do each turn that you need to think for a much longer period. In addition, if you keep the expansion and the base game together there's not really any additional set-up.

The rules are clear and easy to process after one read through, though you might need to keep the book on hand for your first game. Because Takenoko: Chibis doesn't really change the structure of the game, the only thing to learn is what the new tiles do and how the new pandas work, which really doesn't take long as much of the symbolism is the same as or similar to the base game. After one play through I was completely happy with how everything works.

If you disliked Takenoko before, the expansion doesn't change things up enough for it to change your mind. However, if you like Takenoko you'll like Chibis; it's as simple as that. I would also recommend the expansion if you think Takenoko has promise but like your games to have a little more depth. It ups the replay-ability for players who've played the base game a lot and retains Takenoko's unique look and feel. If you're a fan of Takenoko, buy Chibis. There's really no reason not to.