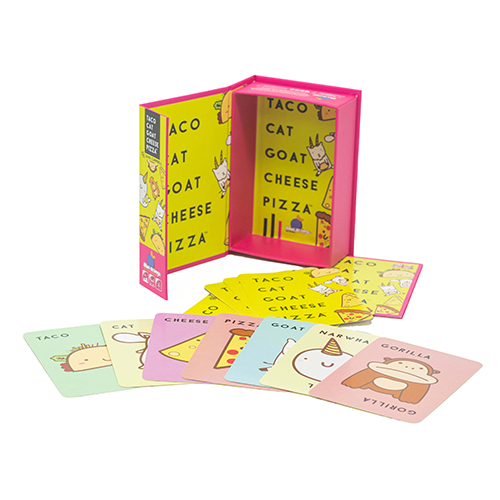 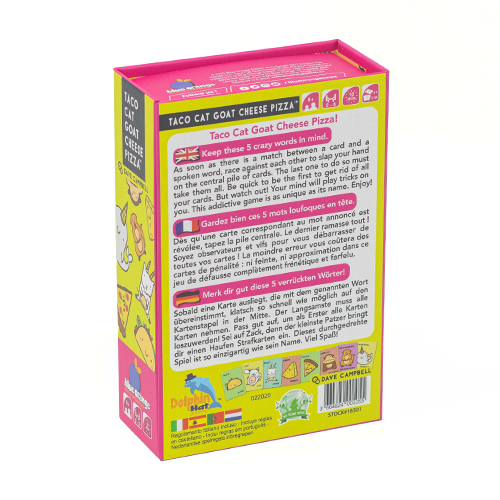 you could earn 878 victory points

you could earn 878 victory points

Taco Goat Cheese Pizza is not your average card game. Filled with fun and excitement, all the family will be rolling on the floor with laughter! The kids will go crazy for this game, not only is it easy to learn, but it has also very few rules to remember meaning it is suitable for absolutely anyone. This is the perfect game to bring out as a party game or for game night, or simply …
Read More
Category Board Games Tags 9-11 Years, Best Sellers, Family, Podcast Approved, VR Distribution, Zatu Gold Award SKU ZVR-TCGCP Availability 3+ in stock
Share
Share this
88%

Taco Goat Cheese Pizza is not your average card game. Filled with fun and excitement, all the family will be rolling on the floor with laughter! The kids will go crazy for this game, not only is it easy to learn, but it has also very few rules to remember meaning it is suitable for absolutely anyone. This is the perfect game to bring out as a party game or for game night, or simply a great laugh with friends.
Included in the small sturdy box is 64 cards, with five crazy words on – Taco Cat Goat Cheese Pizza. The aim of the game is to get rid of all your cards and be the first to slap your hand on the deck, with the last one to slap picking up the cards. This game may look straightforward however it holds a hidden twist. It includes three special cards in which the players must complete hilarious actions before slapping the pile. The winner will be the first to lose all their cards. The gameplay lasts between ten and fifteen minutes but can be played over and over until everyone runs out of laughter. The convenient size of this game means it can be played any time and any place, what more could you want?
Recommended for ages 8+
Player count: 2-8
Time: 10-15 minutes

Back when I went on my first date with my partner, (and yes I realise when I say that, it makes it sound like we've been together for 30 years,) we sat in the board game café we were in and looked around for something new to play. Our eyes were drawn to a green and pink box with five words standing out as the title. It was such a random assortment of words, I went over and picked it up. Those words were Taco Cat Goat Cheese Pizza.

Like Cobra Paw, this game is based on reactions and getting there first. It's a lot of fun and completely ridiculous and so, SO addictive. Designed by Dave Campbell and published by Blue Orange, the adorable artwork draws you in to pop open the magnetically closed box and just get playing.

Shuffle, then deal the cards out between you into facedown decks. If there are less than 6 of you, everyone gets 12 cards. Then the first player, chosen by however method you want, flips over her first card whilst saying the word "Taco." The next player plays their card and says "Cat." Player 3 plays a card and says "Goat." Can you see where I'm going with this? Player 4 plays his card and says "Cheese," and player 1 plays her card and says "Pizza." Then continue in this order, which each player saying the next word in the title.

However, if at any point, the word said matches the card, every player lunges to slap their hand on the pile. The last person to do so must pick the pile up and then starts the play again. If any card is one of the special cards, Groundhog, Gorilla or Narwal, there is a special action that all players must do before they slap their hand on the pile.

Once a player has emptied their pile, they keep saying the titular words as play passes by them. You only win the round when a match or special card occurs AND you're the first one to slap down, so pay attention! Because if you're last, you pick up the pile and you're back in the game.

When I first played Taco Cat Goat Cheese Pizza, I couldn't stop smiling. When I played it again with more people (you can play with 2-8 players), none of us stopped smiling for laughing. We only played a single time, but we did not stop laughing whilst we nimbly slammed our hands on the table, as players went in and out of contention. We grinned ruefully each time we had no cards in our decks but had to pick up the pile because we were too slow. It kept us going and woke up the sleepier members of the group, getting them ready for the next big game! (Race for the Galaxy if you're interested!)

The game is so simple, and devious, with colour swapped cards causing distractions to the unobservant. It's colour-blind friendly too, as the cards state what is on it. You can play this game for hours, but it won't break the bank. And being so simple, it's easy enough to teach members of your family of all ages. Just don't forget to trim your nails, or you could have a few scratches.

And if that's not enough excitement for you, or if you have an aversion to cats, goats or cheese, there is a sibling game - Taco Hat Gift Cake Pizza!