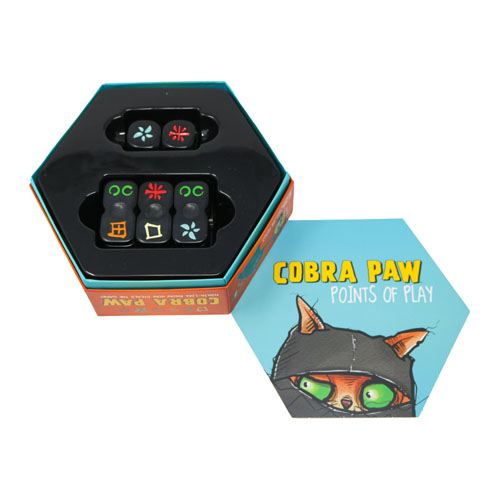 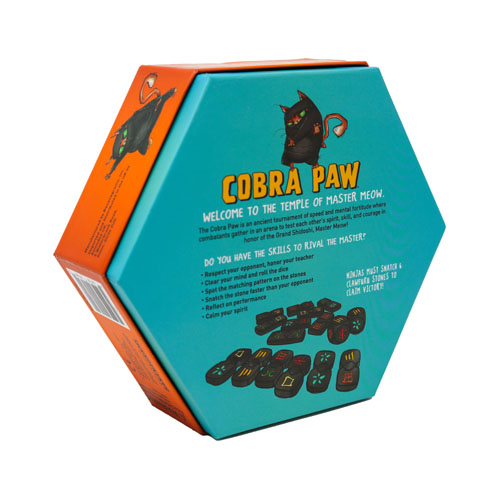 Cobra Paw, from Bananagrams, is an astoundingly simple game of lightening-quick reactions for two to six players. It takes less than a minute to learn and sets-up in less than 30 seconds! To set-up you will place all dominoes face-up in the middle of the table. The player with the smallest hands rolls the two dice first, and all players must try to grab the solitary domino with the …
Read More
Category Board Games Tags 3-5 Years, 6-8 Years, 9-11 Years, Best Sellers, Family, Fun For All the Family, Fun for Kids, Great Gifts SKU ZBG-BANCBP001 Availability 3+ in stock
Share
Share this
73%

Cobra Paw, from Bananagrams, is an astoundingly simple game of lightening-quick reactions for two to six players. It takes less than a minute to learn and sets-up in less than 30 seconds!

To set-up you will place all dominoes face-up in the middle of the table. The player with the smallest hands rolls the two dice first, and all players must try to grab the solitary domino with the pattern that matches the dice. The player who grabbed the matching domino will put it on the table in front of themselves in plain sight and then roll the dice to start the next round. The first player to acquire six dominoes (or eight dominoes for a two-player game) wins the game! It's really that simple!

There is also a code of conduct, which adds nuances such as:

• Dominoes may be grabbed from the common pool or from the supply of other players.
• Grabbing dominoes must be done with the fingers, not the whole hand.
• If multiple opponents grab the same domino at the same time, the player whose finger is in or closest to the divot in the centre of the domino wins it.
• Two-handed grabbing is prohibited.
• Players may not block the sight of other players.

• Ghosts of the Fallen - During set-up, remove all dominoes with a particular pattern. When one of these patterns appears during the dice roll, the first player to shout 'Cobra Paw' gets a domino from the central pool.
• No Touchy - Any player who touches the wrong domino after the dice have been rolled cannot claim a domino this turn.
• Two Ninja Stand-Off - An epic game variant of sorts for two players. Each player races to obtain 11 dominoes. The 'No Touchy' rules apply here.

Fun for families and for evenings with friends, will you become the champion of Cobra Paw?

Cobra Paw is apparently named after a ninja technique developed by Master Meow. Having perfected the skill, he challenged and defeated the evil Phee Lion in a game of Clawfuku bringing happiness to the now legendary land in which they lived. Derek Weston designed Cobra Paw supposedly based on this ancient game, this modern version is published by Bananagrams. So grab your katana and lets find out more…

This is probably the shortest gameplay section I will ever pen as this game is so simple. The player with the smallest hands start. They roll two "Catnippon Dice" which are adorned with symbols. All players then find the domino-style tile called "Clawfuku Stone" with the matching two images on it.

Each tile has a divot and in an argument whoever has their finger closest to this dimple wins the tile. The winner then rolls the dice for the next round. Clawfuku Stones can be snatched from the central pool. But be careful they can also be stolen from you or other players if they are unsuccessful in defending it. First to 6 or 8 tiles wins the battle. I told you it was simple!

While only one player rolls the dice each turn, all of the 2-6 players are constantly involved trying to find the matching tile. The game is a fairly level playing field in terms of demographics, this is more a test of speed and reactions so most people have a chance. Although if your opponent is particularly ninja-like in this field you may not get a go!

The game is suggested for six plus years. This is where age ratings are tricky, a five year old will grasp the concept and the game, but they are unlikely to be winning many tiles. Having play tested it against a variety of ages, you need to be at least ten if you don't want to fabricate a handicap.

It is a frantic game which tests reactions, dexterity with a little bit of memory too. I do find myself getting in a zen-like state as I try and see all the stones rather than flitting from tile to tile. That's my inner ninja trying to escape. I'm beginning to think I am close to mastering the Cobra Paw!

Other games have similar mechanics, Dobble and Jungle Speed jump straight to mind as alternatives and perhaps offer a little more in terms of playing frequency and are worth considering too.

The Catnippon Dice are bigger than usual D6 and have a really nice feel to them. They feel particularly sturdy and yet nice to hold and roll. The Clawfuku Stones are equally weighty with their pleasing little dimples and bold symbols.

There isn't much in the way of artwork. The ancient rune-like ninja symbols on the dice and tiles are different enough in colour and style to aid in quick recognition. The box has Master Meow looking particularly cool in his ninja get-up. However, this is pretty much the end of the theme. The box and the theme in the instructions help to sell the game but do little to enhance the gameplay.

The lid of the hexagonal box is surprisingly tricky to lift off. I'm not sure if my copy was snugger than others or if it is the shape, either way it wasn't easy. Obviously being a sage-like ninja I got a piece of orange ribbon from my wife's wrapping up store to solve this. I drape the ribbon across the box when placing the lid on, which enables me to pull each end of the ribbon and the lid just lifts off a treat. You can thank me later if you're having the same trouble! Once the lid is off everything fits inside very nicely indeed.

The instructions are easy to understand. However, it would be very difficult to not explain such an easy game! Being honest you could quite feasibly play this game with two D6 dice and a box of dominos (with zeros omitted). However, the components do make the game better. With an RRP of £15 you can't really complain either.

As you can probably tell this is a very light game. It is easy to teach, learn and play. Cobra Paw is a speed recognition game that I think would be considerably more fun for a group of kids rather than a group of adults. I think kids vs adults is also fine but the grown-ups will probably have an advantage over younger players. Despite this, I would still consider it to be a good and family game.

The joy of the game is that it is fast, quick and light, but that is also its downfall. Ultimately, you are either the fastest at the table, or you're not! Those that are not, and have slower reaction times can feel a bit left out and daunted. It might run out of replayability even with three variant gameplay rules. I'm glad I've played it, and would certainly play it again sporadically, especially in a family environment.