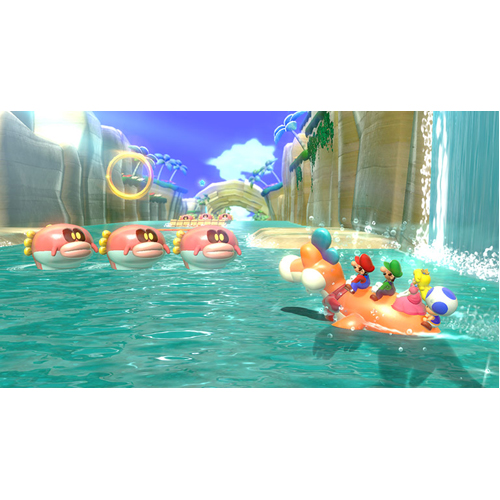 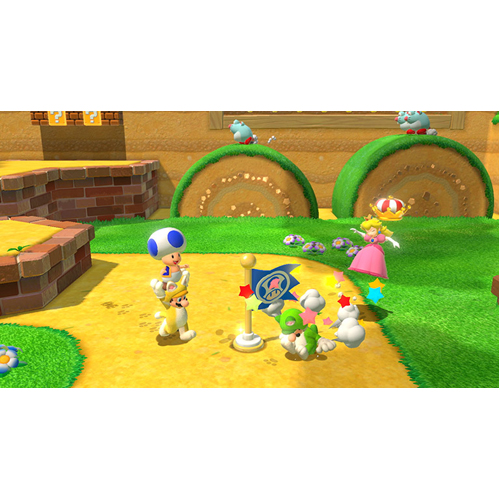 Pay in 3 interest-free payments on eligible purchases. Learn more
Success! We will let you know when this product is available again.
Your email address has been unsubscribed!
Your email address has been unsubscribed!
Notify me when this product is available to purchase!
This email address is already subscribed to this product!
Join Mario, Luigi, Princess Peach, and Toad You will have to be on a quest to save the Sprixie Kingdom in Super Mario 3D World + Bowsers Fury, pouncing onto Nintendo Switch! Bowsers kidnapped the Sprixie Princess, and its up to our hero to rescue her by yourself or with three other players in this enhanced version of Super Mario 3D World. Clamber over walls and cat-scratch your …
Read More
Category Video Games Tags 3-5 Years, Nintendo Switch, Nintendo Top Picks, Super Mario, Super Mario Video Games, Value For Money SKU VKM-NINB26.UK.45ST Availability Out of stock
Share
Share this
91%

Join Mario, Luigi, Princess Peach, and Toad You will have to be on a quest to save the Sprixie Kingdom in Super Mario 3D World + Bowsers Fury, pouncing onto Nintendo Switch! Bowsers kidnapped the Sprixie Princess, and its up to our hero to rescue her by yourself or with three other players in this enhanced version of Super Mario 3D World.
Clamber over walls and cat-scratch your enemies using the Super Bell, clone yourself with the Double Cherry, pop the Cannon Box on your head, and fire off projectiles at your foes. This enhanced version of Super Mario 3D World also comes with gameplay improvements, like increased running speed for all characters and the ability to climb higher while using the Super Bell. You can even play using gyro controls!
As well as local co-op plays with up to three friends, players can now enjoy online multiplayer mayhem!

Please bear with me for a brief overview of 3D World. I am aware that the are many people who have already played it but also those who have not. So for those of you that have not, let me CATch you up.

Our moustached protagonist, brother Luigi, partner Peach, and good friend Toad are on a stroll when they come across a broken pipe on the path. For once, Mario and Luigi actually use their Plumbing skills to fix the pipe. A sprite emerges, claiming Bowser has been up to his usual antics. He's taking all of the fairies and imprisoning them in cages throughout the various worlds. Bowser pops up seizing the fairy and makes a quick getaway. Thus starts our adventure.

To be honest from the outset… I never got round to playing Super Mario 3D World on the Wii U. I know that may be surprising as this is Nintendo's second best-selling game on the console. The Wii U era, although having some stand-out games, wasn't exactly a groundbreaking time. I feel quite a few skipped the era from the original Wii to the Switch.

As a first time player, I have a modicum of guilt for missing this title. Looking back from what I know now, SM3DW took the 2D platformer and incorporated it with the most recent (at the time) 3D Mario, Galaxy. 3D World is a superb game that combines all the usual platforming, level-ups, and secrets that you would expect, plus a few more surprises. It presents new challenges, especially if you're a completionist. It is a genuine joy finding and collecting everything to 100% this game and never feels cumbersome.

Although, this does highlight Nintendo's lack of achievement system. I want to be acknowledged for grinding through the game and collecting everything there is to offer. Yes, it may give you one reward but it would be nice to have a system that stored what you've accomplished.

Whether you chose Mario, Luigi, Peach, Toad, or eventually Rosalina, SM3DW lets you and up to four people tackle the challenges that are laid out before you. I know the sound of four-player Mario games are fun, and please don't get me wrong, it still is, but in this particular title, it's nothing but chaos.

With the worlds being more intricate than your normal 2D Mario, it can be hard manoeuvring around. It is easy to get in each other's way and most of the time it does not really feel like you are helping whatsoever. In fact, it feels like you are slowing everyone down. As easy as it is to collect lives in this game, in multiplayer you will burn through them. Before you know it, you'll be accidentally pushed off edge whilst scaling a castle.

I really think Nintendo has missed out on an opportunity here. I know Mario games are usually co-op and never really competitive, but if this game had a battle mode or a VS mode, I really think the multiplayer would thrive. Being able to knock your opponents off using your feline paws, taking their own individual lives, would be the hectic fun that would have us clawing for more.

Nintendo has ported over games numerous times without adding anything to them. So Bowser's Fury came as a surprise to most people when the 3D World port was announced. Thankfully it's simply claw-tastic! And yes, I am ashamed of myself for that pun!

In this additional content, we see Mario team up with Bowser Jr to help him bring his dad, who is unusually more sinister, back to his normal self. To help Bowser Jr, you travel to each lighthouse collecting 'Cat Shines' eventually using them to unlock the Giga Bell, (a giant cat-like bell). Then you transform into a Super Sayian Cat Mario and take down Bowser for good. Your basic Mario story with a slight twist, nothing too brain-busting.

Whilst collecting the Cat Shines, you can see Bowser Fury inside his shell in the middle of the map. Eventually, as he spins faster and higher, he will enrage, turning the world into a dark landscape of raining molten blocks. Bowser Fury will slam down and start breathing fire in your direction. Find a cat shine to send him back for a while, or go to the previously mentioned Giga Bell to fight him.

Bowser Fury always being there in the Center on the map has a Majora's Mask feel. Maybe not as creepy as the moon, which will haunt me for the rest of my life, but enough to make you want to find a solution to the problem before it gets out of paw.

The Feline and the Furious

The gameplay and mechanics are similar to Odessey. This is where, I think, this game has stemmed from. Whether it was originally an expansion or an experiment for what's to come next in the franchise, we don't know.

This title brings all the core mechanics you would expect. From how you collect the shines to all the power-ups that are in previous titles. However, this is Mario's first truly interconnected map with Super Mario Sunshine being the only one close to it.

Gone are the loading screens when travelling from world to world. To travel to each lighthouse you either platform or ride Mario's trusty sea dragon Plessie, giving you that open-world adventure. Not to the extent of Breath Of The Wild but nevertheless, it's a step in that direction.

Another new addition is the ability to store power-ups. A maximum of 5 for each can be stored and oh man, is this a welcome addition. I cannot tell you how many times I had to leave a level just go back to it once I had the power up I needed in 3D World. Now you can simply ask Bowser Jr to throw you the power-up needed and get it done straight away.

Bowser Jr also serves as a kickass sidekick, if you need him to. Players have the option of choosing how much assistance he gives. Whether it's a little, a lot, or even none whatsoever, it's nice having that companion throughout the game. If you do choose to use him, Jr can point you to secrets, help you fight enemies, and reach the places you can't.

Don't be fooled though! Bowser Jr may be teaming up with you and needs your help, but he is still a bad boy for life. Whilst playing through he decided to whack a baseball out of a little kitten's paws as it was harmlessly playing, SAVAGE!

Cat Out of Lives

I suppose as a new player, I have not met the problem existing players have. Everything is fresh and I can't express how much fun I had playing both of these titles. However, If you have seen it all before and are just here for Bowser's Fury, I see your dilemma. It took me around 6 hours to fully complete Bowser's Fury without missing a single shine. On average, it is about 3 hours to complete what there is of the story and enter the endgame. It is a lot of money to spend on that amount of game time.

The graphics are great but can deter every now and then. Bowser's Fury runs at 60Fps (frames per second) docked and 30Fps in handheld mode, making it not the most aesthetically pleasing game. However, it still has the vibrance needed to enjoy a Super Mario game. These games aren't aimed the be the best looking games ever. In fact, this is the case with the majority of the top 10 most played games in the world. Players seem to enjoy fluidity with lower Fps over graphics. That being said, with the release of Super Mario 3D All-Stars last year, it is amazing to see how far Mario has come graphically from the likes of Super Mario 64.

For new players, it is honestly a no brainer. Super Mario 3D World + Bowser's Fury brings a new experience to the classic side scroller with high paced energy and a charismatic flair. Finding new ways to tackle the new worlds and collecting stickers with various characters is fulfilling and will serve you with endless hours of glee.

For existing players, I think it will still give you that same buzz. The pace of the game has been amped up, giving you a more enjoyable pace for racing through. Bowser's Fury is like the icing on the cake in this two-for-one. One that seems like an experiment for what's to come in the franchise. And if it is, I'm excited!

Editors note: This blog was originally published on February 23rd, 2021. Updated on March 10th, 2022 to improve the information available.