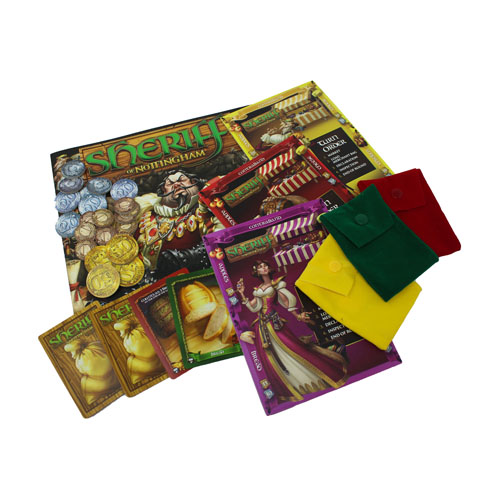 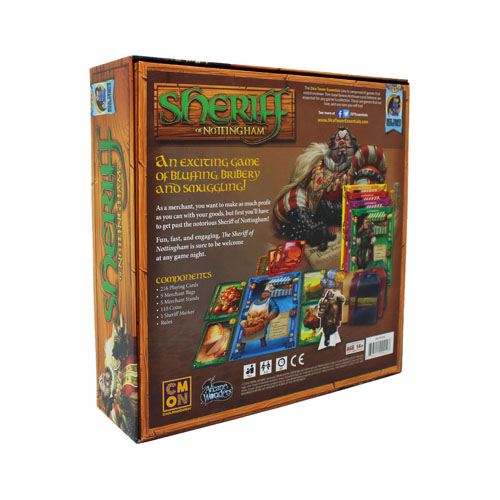 Pay in 3 interest-free payments on eligible purchases. Learn more
Success! We will let you know when this product is available again.
Your email address has been unsubscribed!
Your email address has been unsubscribed!
Notify me when this product is available to purchase!
This email address is already subscribed to this product!
The Sheriff of Nottingham is a fun and engaging game for all where each player will have the chance to step into the shoes of the Sheriff himself! Other players, acting as Merchants will attempt to bring their goods into the city for profit. Beware though, while many may act as honest merchants, there is always the possibility of contraband being smuggled into the city! Experience N…
Read More
Category Board Games Tags André Zatz, Arcane Wonders, Companion App, Dice Tower, Golden Pear, Sérgio Halaban, Sheriff of Nottingham SKU ZBG-AWGDTE01SN Availability Out of stock
Share
Share this
80%

Sheriff of Nottingham is a light-hearted humorous game of truths, lies and all the negotiation of the grey area in between. Players win by holding the most gold at the end of the game, claimed by collecting the largest sets of different items. These can be legit or illegal…Players can win by telling the truth through the whole game, dabble in a few sneaky lies or downright lead people in the completely wrong direction! Players take the roles of city traders looking to bring goods of various types into the market to sell. The main selection of items consists of food, however there are also weapons and items of extreme value to be smuggled by the shrewd trader. Each round, one player becomes the titular Sheriff of Nottingham whilst the other players continue as their characters. After collating a hand of goods from a partially visible draw deck, the traders must then select a group of cards and place them secretly into a sealed bag stating what they contain. The players cannot announce illicit goods, so have to declare them as something else such as, “4 cheeses”. These are handed to the Sheriff who may then interrogate the owner of the bag to ascertain if they are telling the truth. Players are free to bribe the sheriff to not open the bag or even open someone else’s! If the Sheriff lets the bag pass, it is returned to the owner and the contents are revealed and laid out on the player board. If the Sheriff did decide to open the bag and the trader was telling the truth, he must pay the player gold as recompense. However, if a brazen lie is discovered the trader is penalised and the cards confiscated. The game continues with the Sheriff of Nottingham role moving around the players two times each. Finally, all the goods are counted up and the players with the most items of each good claim the most gold. Illicit goods can generate a high gold payout for the risk-taker. Player Count: 3-5 Time: 60 Minutes Age: 13+

One of the main reasons I play games is to win, to get one up on the suckers sat at my table. Only joking, I play for the experience, the journey, the banter and the fun (and to WIN). Different games achieve this is different ways, Ponzi Scheme ramps up the tension with player interaction and the stress of trying to make your money last. Happy Salmon by making you shout your head off and prance around like fools. And Sheriff of Nottingham by letting you all lie and deceive each other, but also give you a turn at really power.

This is a game of deceit and trust, or mistrust, make no bones about it. Each round players take turns to 'be' the nefarious Sheriff. Practically, this means you are the one who gets to put pressure on the traders of Nottingham, reading their body language for signs of deceit. Every player gets six goods cards, some coins and a felt pouch. At the start of a round each player may discard openly some of their cards to take the same amount back from either of two discard piles or the draw pile.

Then each non-Sheriff player loads up their bags with good. Goods card are either red or green. Red goods are contraband like pepper and weapons, green goods are legal goods like bread and cheese. You will load you bag with up to five goods but there are certain rules. What ever you place in the bag, you must declare them all to be the same type of good, it must be a legal good and you cannot lie about the number of cards. So say I put three apples and one cheese in the bag, I must say something like 'four apples'. You could say 'four cheese' too but it probably won't be a great move.

Once you have clipped your bag shut and made your announcement, you pass it to the Sheriff.

The Sheriff player will then decide one by one whose bag to inspect and whose not to inspect. Of course if you don't want the Sheriff to look in your bag you could always offer them some goods, some gold, or a non binding future promise of not searching their bag when you are Sheriff. If the Sheriff finds contraband or undeclared legal goods you must pay them compensation, however if the Sheriff finds exactly what you said was in the bag then they must pay you compensation.

This clever little interplay leads to some memorable situations. You promised not to search Sophie's bag if she didn't search yours, so that means it might be worth searching right? Or will she know that you know this and tell the truth. Or will she know that you know she knows this and err... do something. And this is not just happening between you and one other person but ideally three other people. What about bribing the Sheriff to open someone else's bag? Mwhaaahahahaha!

So Sheriff of Nottingham is a lot of fun, but it isn't without niggles. The game plays best with more people but this also makes the game take a lot longer than it should. Without the added expansion that varies things this is really noticeable and dare I say it the last few turns can drag a bit.

Games like this need to be short sharp hits of fun, not lengthy arbitrations. On top of this, Sheriff of Nottingham is essentially a very mean set collection game. You are looking to smuggle in as much of each type of good as possible to earn the most gold, and tripping others up is a massive part of this. This can lead to the dreaded 'ganging up on one player' but mostly it is the presumed leader so that is okay!

Lastly in the cons, people can take a while to work out the relative value of things. If you are explaining to a newcomer be sure to explain exactly how much compensation they are likely to pay if caught so you don't have people offering 20 gold when they only would have paid two in compensation.

Ultimately, Sheriff of Nottingham is an easy teach and with a group who play quickly it packs in a lot of fun and banter. Add some of the modules from the recent Merry Men Expansion (a must have if you are already a fan) and you have a great game on your hands.