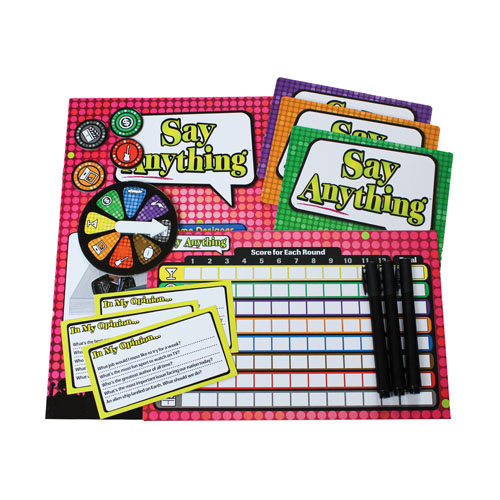 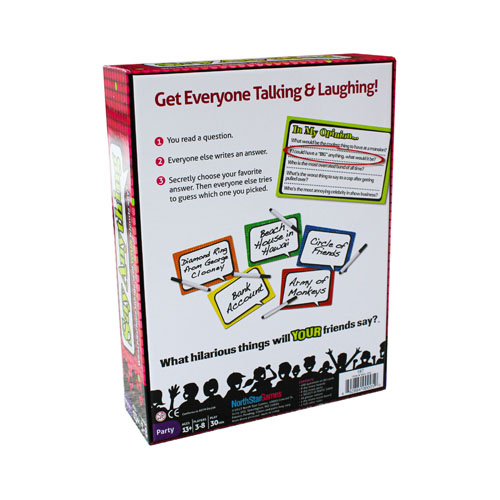 Find out what your friends really think when everyone writes down answers to questions like, “What’s the coolest thing to have at a mansion?” or “What’s the funniest movie of all time?” All the players try to guess what the other players have written! Three to eight players can join in the fun. North Star Games. Party game of the year! What would …
Read More
Category Board Games Tags BGG Golden Geek, Dominic Crapuchettes, golden geek, North Star Games, Satish Pillalamarri SKU ZBG-NSG200 Availability Out of stock
Share this
87%

Find out what your friends really think when everyone writes down answers to questions like, "What's the coolest thing to have at a mansion?" or "What's the funniest movie of all time?" All the players try to guess what the other players have written! Three to eight players can join in the fun. North Star Games. Party game of the year! What would YOUR friends say?

In Say Anything, players ask and answer pre-set questions which start with “In my opinion…" to see how well players know each other and who can give the funniest answers.

First Impressions of Say Anything

I'll admit I'm biased. This is the sort of game I usually hate with a passion. The box initially did little to dissuade me. Some wipe clean player boards, pens, a small score board, one spinner and a bunch of cards.

It's a pretty small box, containing a few different types of cards, tokens and several small player boards (of which one is used dependent on the player count). The rule book is clear and simple, and the box is small enough to carry for a night out in the pub – as long as you don't expect it to fit in your pocket! Set-up and rules explanation is incredibly quick too.

The first player will grab the top card, which will have a number of pre-set questions on it, and choose the question he wants to read out. This will start “In my opinion” and will be followed by something which will usually inspire a good debate, such as “What would be the ideal job?” or “what would be the hardest thing to sell door to door?”

Each of the other players then scribbles an answer on to their player board. Time is important as anyone with an answer which duplicates an existing one will have to change their answer. Each player then gets a chance to convince the first player why their answer is the best, and it's this stage that often provokes the most humour as players desperately stretch to explain why their answer was funny (or apt).

The first player will then secretly choose their favourite answer by selecting it on the cardboard wheel, while other players can then bet on which answer they'll pick (including their own). Once everyone has picked, the first player will reveal their favourite answer and points will be awarded for writing and betting on the correct answer (guessers) and having players bet on the right answer (answerer).

Say Anything is surprisingly fun and the questions are generally written to allow a lot of creativity and humour as a result. Of course, with any game like this it's going to depend who you're playing with, but being able to pick a question from the range on a card allows almost anyone to find one they'll be comfortable with, whether you're playing with adults in the pub, your parents-in-law or younger children.

The points scoring feels a little arbitrary and I'd be surprised if anyone gets competitive over this as it is one of those games where the points and the winner are largely irrelevant, and the enjoyment comes from playing the game.

Introducing the scoring mechanic where the person asking the question just has to pick their favourite choice, rather than actually come up with an answer themselves is great. It reduces pressure on that person, meaning the game flows a lot quicker, and opens up the game to the more reserved types.

One downside to this is when you are playing with a couple, or close friends. Some of the more factual questions, such as “who is your favourite TV couple” are always going to be guessed by those who know them really well, but then there is still room for a witty, humorous answer to take the prize over the “right” answer.  The betting element further mitigates this, as well as allowing those who are less naturally funny to still enjoy it, as they can earn points simply by recognising a right, or funny answer, even if they weren't able to come up with anything themselves.

As with any game of this type, the experience is hugely dependent on who you are playing with, but the game mechanics make it hard for anyone to not have a good time. I really wasn't expecting to like this at all, as I am not a big “party” game fan, but I would hugely recommend Say Anything to anyone.