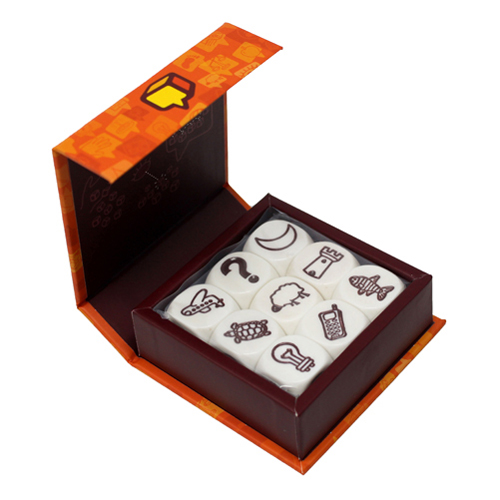 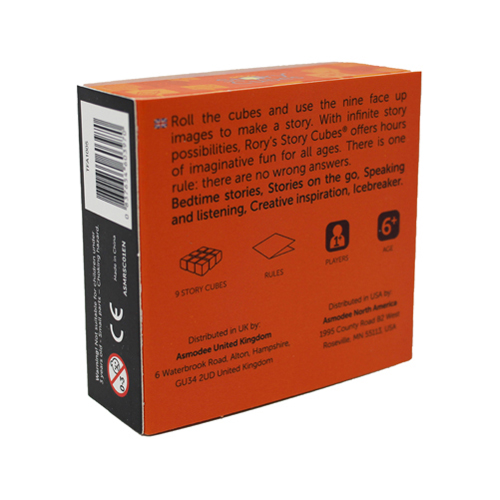 Pay in 3 interest-free payments on eligible purchases. Learn more
Success! We will let you know when this product is available again.
Your email address has been unsubscribed!
Your email address has been unsubscribed!
Notify me when this product is available to purchase!
This email address is already subscribed to this product!
Rorys Story Cubes is a pocket-sized creative story generator, providing hours of imaginative play for all ages. With Rory’s Story Cubes, anyone can become a great storyteller and there are no wrong answers. Simply roll the cubes and let the pictures spark your imagination! Play with them solo or combine both sets to kick-start your creativity and set your imagination in motion…
Read More
Category Board Games Tags 9+, Educational, Rory's Story Cubes SKU ZBG-RSC01TCH Availability Out of stock
Share
Share this
85%

Rory's Story Cubes is a game that's enormous fun and will sharpen your wits and hone your imagination. The 54 images were designed by Rory O'Connor of Ireland, a trainer in creativity and creative problem-solving. They can be used to arrive at answers or decisions in an indirect and ingenious way.

Originally Rory had put the images on the faces of a Rubik's Cube, and players would turn the Cube to scramble the images, then choose one side to play with. Kate Jones of Kadon Enterprises suggested putting the 54 images on 9 separate cubes, to allow for quicker ways to generate more varied combinations, including conceptual puzzles. Rory readily agreed, having considered the 9-cubes idea himself earlier. At a creativity conference held at Kadon headquarters in May 2004, a prototype was whipped up, and in 2005 Kadon launched the cubes version of Rory's Story Cubes.

Each jumbo 1" cube has 6 images or icons, with a total of 54 all-different hand-inlaid images that can be mixed in over 10 million ways. You roll all 9 cubes to generate 9 random images and then use these to invent a story that starts with "Once upon a time..." and uses all 9 elements as part of your narrative.

Play it as a game for one or more players, or as a party game for three or more. Or play it as an improv game where each player contributes part of the story, picking up where the last one left off. Win award points for speedy delivery, inventiveness, imagination, drama and humor.

Full instructions include several other ways to use the cubes to solve problems, break up writer's block, enhance your imagination and heighten your ability to find unifying themes among the diverse images. Interpret or get at the meanings of your answers more quickly. It's fun, easy, and mind-stretching.

As a puzzle the cubes will really give your imagination a work-out. You'll practically feel both sides of your brain dancing. The challenge: Fit the 9 cubes into a 3x3 square. Now examine the cubes in any one row and turn them so their tops have something in common. Do this for all 3 rows. Explain your choices, or challenge another player to identify the element they share. More than one answer may be right, and there are thousands of possible combinations.

Rory's Story Cubes are recommended for all ages over 8, though it's fun to watch a younger child create combinations with the cubes and make up stories.

Dice are an integral part of the board gaming world, and every so often someone tries to reinvent them. I say ‘every so often’, but there seems to be a new sort of die on Kickstarter every time I browse on there, and that’s a lot. Not many reinventions works, but one die type that’s got a lot of chatter recently are Rory's Story Cubes.

How to Play Rory's Story Cubes

Okay, are they dice or are they story cubes? Each is a small cube, which you roll and react to the symbol on it, so we’re going to go with dice. You don’t roll just one though, as the basic ‘starter’ set comes with nine cubes, which you gather up, roll in one go, and then use the symbols visible on top to tell a story. And that, ladies and gentlemen, is the easiest game explanation you’ll ever see.

Tell a story? Well, yes, these are story cubes, and the idea is you look at your nine cubes, allow the symbols to trigger ideas in your head, and then spontaneously tell a story by moving from one dice to the next, until all the symbols are covered and the story is done.

The beauty of the story cubes is we’re saying symbols because there’s not even a set name or interpretation for the symbols: they are whatever you think they are, and you tell the story to match. However, as the Rory's Story Cubes line has expanded, extra packs of cubes have opened up storytelling vistas: there is a pack filled with ‘action’ symbols, there’s a Dr Who pack which very clearly has Daleks to work in, and all of these extra packs can be mixed and matched.

Just let your imagination go as you free style from one symbol to the next.

If you’re sat at home wondering what the point of rolling dice and making up a story of no consequence is, there’s a three part answer to that. The story cubes have been taken up by schools as a good way of getting children focused on thinking, linking ideas together and directing stories.

There are even giant sized cubes for easier use in schools. But as an adult, I have found them a great way of warming up before a brainstorming session, and have used them very successfully in this professional capacity. They’re an excellent filler in gaming sessions, and can kill time in restaurants if you’re the sort of person who’d get dice out. I am, what can I say.

I wouldn’t go as far as to use them for writer’s block, as Rory’s suggests, but I’m on board with everything else.

As well as the basic Story Cubes, you can now buy Untold: Adventures Await, which is basically a RPG using the cubes, which a five stage process to make every story work. This is more guided and involved than the basic cubes.

As for the future? Asmodee have acquired the property, while the designers have gone on to create Hub Games Studio and have scheduled a very challenging, brave property. One thing’s for sure: Rory's Story Cubes are the right sort of trigger.